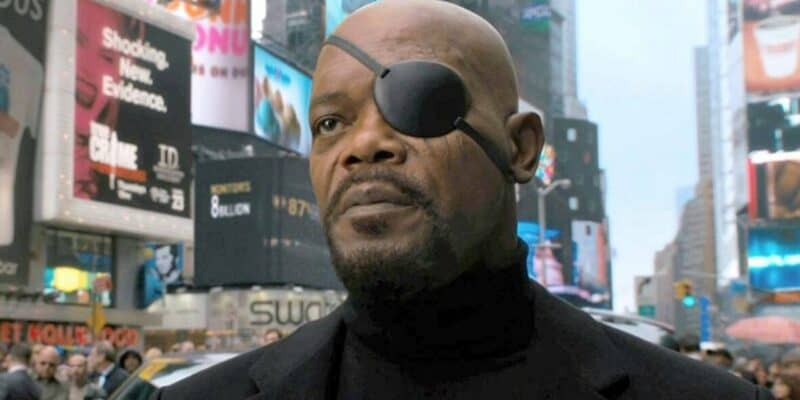 The longtime MCU actor has played a large role as former S.H.I.E.L.D. director, Nick Fury. Without Jackson, the Avengers we know and love wouldn’t have become the iconic team that saved New York City from Tom Hiddleston’s Loki in The Avengers (2012). Now, Jackson has returned for his upcoming series, Secret Invasion that is currently filming.

Many fans are excited to see Jackson return as Secret Invasion will most likely explain what Fury has been up to. Fans haven’t seen the real Nick Fury since the post-credit scene in Spider-Man: Far From Home (2019) as it was revealed that Fury was enjoying a vacation up in space.

Even though Jackson had a large role in the movie, it was also revealed that Tom Holland’s Spider-Man wasn’t working for Fury, but for Talos (Ben Mendelson). This was possible because Skrulls can shapeshift and Secret Invasion will let fans see more of the darker side of the Skrulls.

On the Happy Sad Confused podcast, Jackson revealed that he didn’t care about Marvel comics as he only looked at them to “discover himself” as Nick Fury:

“I’m a comic book fan, so I’ve been reading comic books forever. And truth be told, I don’t even read Marvel comic books. I kind of look at them, and when I discovered myself as Nick Fury, I just started to see myself, and I would think, ‘What am I doing on this [comic book] cover?’ But that was kind of it, and I’d put the book back. But I’ve read DC comics my whole life. I mean, we all [grew up with] Superman, Batman, Aquaman.”

Jackson confessed that he didn’t care for the Marvel comics as he was an avid reader of DC comics. When asked later in the podcast if he plans to be involved in the DCEU, the actor admitted he didn’t think any script could persuade him:

“Actors are mercenaries. It’s kind of what we do. We act for who we act for. But I don’t know if I’m ever going to read a DC script that’s going to make me go, ‘yeah, this is dope.’ I was all about DC. But I don’t know what the thing is about them cinematically.”

It is true that the DCEU has struggled to be an interconnected universe. Many of the movies were loosely connected and then retconned leaving fans to be confused. After the whole Joss Whedon scandal with Justice League (2017), it became very clear that DC’s future wasn’t with their interconnected movies, but with their standalone projects. Joaquin Phoenix’s  Joker (2019) and Robert Pattinson’s The Batman (2022) have proven that DC movies work best when separate from the other films.

Samuel L. Jackson has played many iconic roles such as Mace Windu in Star Wars and in other movies like Pulp Fiction (1994), Die Hard with a Vengeance (1995), The Kingsman: Secret Service (2015), etc. Whenever Jackson is cast for a new role, there are people going to the theaters to watch the actor.

Now fans will get to see more of Nick Fury in Secret Invasion as the upcoming MCU series will most likely debut sometime in 2023.

Do you prefer Marvel Comics over DC Comics? Can you see Samuel L. Jackson in a DC movie? Let us know what you think in the comments section below!