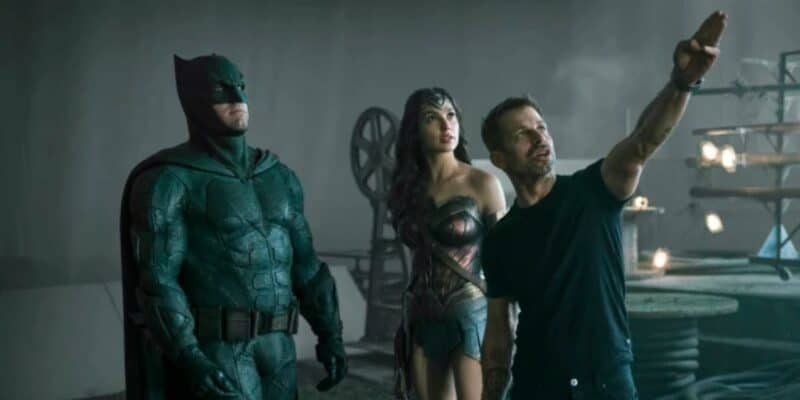 DC fans — and many actors — aren’t pleased with Warner Bros. and their sidestep from director Zack Snyder’s planned DC Universe films, including an unmade Batman origin story with Ben Affleck and scrapped Man of Steel 2 with Henry Cavill. After 2021’s DC Fandome, #RestoreTheSnyderVerse is trending again, and Warner Bros. is taking notice.

DC held their annual DC Fandome 2021 event, showcasing every bit of new teaser trailer and concept art for upcoming movies like The Batman (2021), Shazam! Fury of the Gods (2023), and Aquaman and the Lost Kingdom (2022). While the teasers were captivating and showed that Warner Bros. / DC has a promising future, some fans were disappointed with the lack of news regarding Zack Snyder’s involvement with the DCEU (DC Extended Universe).

A new #RestoreTheSnyderVerse movement trended across social media platforms like Twitter during the 2021 Fandome, with many DC fans asking for a glimpse of anything regarding Zack Snyder’s Justice League and their characters (beyond the Flash and Aquaman, respectively.

While that was going on, fans of Zack Snyder’s DC movies also took to Twitter once more with the #RestoreTheSnyderVerse hashtag, which trended high enough for multiple media outlets to take notice. This was far from the first time the fanbase that got Snyder’s version of Justice League released with the #ReleaseTheSnyderCut hashtag have shown a passionate desire for Snyder’s DC movie arc to be finished up. Related projects like David Ayer’s unreleased original cut of Suicide Squad, the never-made Deathstroke origin movie, and Ben Affleck’s unrealized Batman solo film have also garnered considerable interest in being given a second life.

The internet has the power to make or break a movie. Still, in this case, DC fans hope to expand the DCEU with new movies surrounding familiar characters, like Henry Cavill’s Superman and Ben Affleck’s Batman, with Zack Snyder at the helm. In a sense, many are hoping Snyder can become the Kevin Feige of Marvel Studios for DC’s future movies.

Related: Ben Affleck stepping down as director of “The Batman” solo movie

Warner Bros claimed they had plans for Green Lanterns when Zack Snyder was about to give us John Stewart I see nothing at DC Fandome #RestoreTheSnyderVerse.

Warner Bros claimed they had plans for Green Lanterns when Zack Snyder was about to give us John Stewart I see nothing at DC Fandome #RestoreTheSnyderVerse pic.twitter.com/crYQRWDsnl

We will keep Pushing until We #RestoreTheSnyderVerse.

That Bat Nerd on Twitter advocated for the release of a “Batfleck” movie, a solo story surrounding Ben Affleck’s Batman character:

@BenAffleck deserves to have his own version to be told and saw by many whom want this to happen. We deserve to see his Batman, his Gotham City, his Wayne Enterprises, everything you can consider of him to seek his story out. #RestoreTheSnyderVerse.

#MakeTheBatfleckMovie@BenAffleck deserves to have his own version to be told and saw by many whom want this to happen. We deserve to see his Batman, his Gotham City, his Wayne Enterprises, everything you can consider of him to seek his story out. #RestoreTheSnyderVerse pic.twitter.com/9wdAv0ZGDY

The significance behind the most recent #RestoreTheSnyderVerse is that despite Warner Bros. making the executive move to focus on their DC films with a new lens, a significant amount of the fan base is still passionate about Zack Snyder and other DC creatives fulfilling their original visions.

While it seems risky to green light a Justice League II, Batman origin story with Ben Affleck’s character, a sequel to Man of Steel (2013), or even a re-cut of director David Ayer’s Suicide Squad (2016), it’s shocking to still see such passion from many fans for a push to create the rest of Snyder’s superhero vision — especially on the biggest day for DC.

Warner Bros. and other production studios realize the massive effect comic book and movie fans have on their upcoming superhero films, resulting in director Matt Reeves’ insanely anticipated The Batman (2022) movie with Robert Pattinson as the next Bruce Wayne/Batman.

What do you think of #RestoreTheSnyderVerse? Let us know in the comments below.