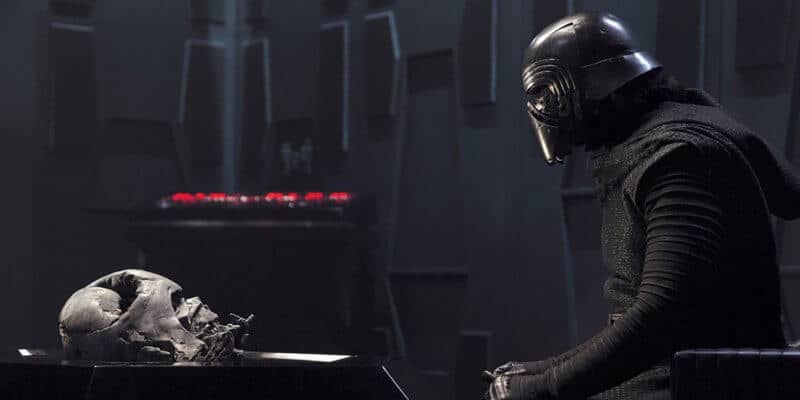 As anticipation mounts for the official launch of the Star Wars: Galactic Starcruiser hotel at Walt Disney World Resort in Orlando, Florida, West Coast Disney Parks lovers have been left wondering what might be in store for them at Disneyland Resort.

Right off the bat, it is important to note that Disney World’s Disney’s Hollywood Studios Park has significantly more room to expand its version of Star Wars: Galaxy’s Edge than Disneyland’s Disneyland Park does — where Disneyland’s Batuu expansion literally backs up to a busy Anaheim road, Disney World’s has acres and acres of empty land beyond it [below].

One potential way to bring more of the Star Wars franchise to Disneyland Resort, however, is the proposed DisneylandForward expansion.

The concept art for this new area includes what appears to be a Wakanda-themed area, from Marvel Studios’ Black Panther and Avengers franchises, so Disney clearly isn’t opposed to using more recently acquired IPs in the DisneylandForward project.

Furthermore, the fact that Disneyland has already added the Star Wars Trading Post in the old Rainforest Cafe building in the Downtown Disney District proves that there is motivation to extend the Star Wars presence at the California Disney Parks beyond just Galaxy’s Edge, even though space is limited.

If Disney wanted to incorporate a Disneyland Star Wars hotel into their upcoming expansion project, a dark side-themed structure could be the perfect route for the company to take — and, they’ve just given themselves the perfect opportunity to explore this possibility with the newly-announced LEGO Star Wars Halloween special, Terrifying Tales.

In part, the official description of the upcoming Disney+ Original reads:

First, the fact that Disney and Lucasfilm have even planted the idea of a Sith-themed luxury hotel in Star Wars fans’ minds proves that they’ve at least gotten so far as a vague concept of how such a project would look — after all, they’ve clearly designed it (albeit in LEGO animation form).

Secondarily, however, a Sith hotel at Disneyland Resort would be the perfect foil to the incredibly immersive Halcyon luxury starship at Disney World. It is going to take a major level of Star Wars commitment to board the Starcruiser for a two-night, three-day adventure, only leaving for your port excursion to Batuu’s Black Spire Outpost, and to ride Star Rise: Rise of the Resistance and Millennium Falcon: Smugglers Run.

Walt Disney Company CEO Bob Chapek has said the experience will leave Guests “blown away”, but it also won’t be for the faint of heart, seemingly — encounters with Kylo Ren and the First Order, smuggling Coaxium, and hiding stowaways are all reportedly on the docket for the journey to a galaxy far, far away!

A dark side-influenced Disney Resort would, in all likelihood, appeal to more casual Star Wars fans, therefore drawing in a portion of the fanbase the Starcruiser Resort simply won’t.

Furthermore, having two different Star Wars hotels at the domestic Disney Parks could go a long way toward assuaging those who are still annoyed that Star Wars: Galaxy’s Edge features the same planet on both coasts.

This type of differentiation could be key moving forward — a Sith hotel would be a new way to draw Star Wars fans from all over the map to Disneyland Resort.

Whether Disney opted to keep a Sith Resort in the same timeline as the Starcruiser and Galaxy’s Edge — between Star Wars: Episode VIII – The Last Jedi (2017) and Star Wars: Episode IX – The Rise of Skywalker (2019) — or have it exist outside of the official Star Wars timeline as an ode to all things Sith-centric, there would undoubtedly be nods to some of the most popular Star Wars characters of all time, including Kylo Ren and Darth Vader.

For now, of course, the idea of an actual Star Wars Sith hotel remains nothing more than a dream, but the fact that the latest LEGO Star Wars installment is already introducing us to the idea could, perhaps, bode well for the future.

An obsidian tower rising from the lava fields of Mustafar, Darth Vader’s personal redoubt sits above an ancient Sith cave that is a source of malignant power, as well as near the site of the former Anakin Skywalker’s maiming by Obi-Wan Kenobi. These twin connections help Vader channel his rage and pain into a focus for the dark side of the Force. After Vader’s death, the castle has become a pilgrimage site for cultists drawn to the Sith Lord’s legend.

Just tell us you can’t imagine walking into a sleek lobby filled with Sith artifacts, like Vader’s melted helmet and Ren’s red lightsaber…

What do you think? Will Disney build a real Sith Disney Park hotel? And could the DisneylandForward proposal be the next step in doing so? Let us know!