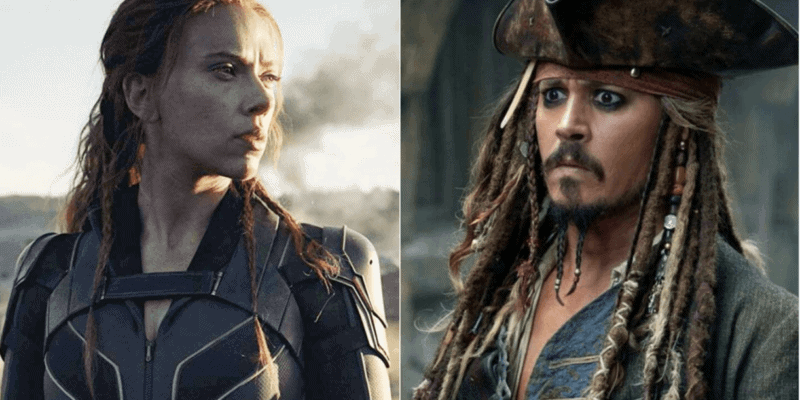 Today, the floodgates of the Black Widow (2021) box office saga have broken wide — and we mean wide — open, with MCU star Scarlett Johansson (Natasha Romanoff/Black Widow) filing a lawsuit against The Walt Disney Compay for breach of contract.

Allegedly, a clause was added to Johansson’s contract in 2019, the year Disney+ launched, prohibiting Marvel Studios — and their parent company, Disney — from releasing the Avengers franchise prequel film, which takes place between Captain America: Civil War (2016) and Avengers: Infinity War (2018), on a streaming service simultaneously with its theatrical release.

As we all know, though, that’s exactly what happened. Following over a year of delays due to the unanticipated COVID-19 pandemic, Black Widow — the first movie in the Kevin Feige-led studio’s Phase 4 — released both in theaters and on the $29.99 Disney+ Premier Access tier on July 9, 2021.

The film opened to an $80 million box office weekend but suffered a “stunning crash” — the worst the Marvel Cinematic Universe has ever seen — in its second weekend in theaters. Presumably, this is what led to Johansson’s lawsuit, as she and her legal team allege that much of her pay was tied to box office performance.

Disney has responded to the lawsuit, calling it both “callous” and “disappointing”. Johansson has been part of the MCU for over a decade, making her debut in Iron Man 2 (2010) alongside another original Avenger, Robert Downey, Jr. (Tony Stark/Iron Man).

Now, Marvel fans and Disney fans are unsurprisingly beginning to voice their opinions, too. And, some are comparing Johansson to actor Johnny Depp, who was fired from his iconic role as Captain Jack Sparrow in Disney’s Pirates of the Caribbean franchise following his legal battle with ex-wife Amber Heard (Aquaman, Aquaman and the Lost Kingdom).

Depp lost his libel lawsuit against U.K. News Group Newspaper publication, The Sun, in London last fall, after vehemently denying domestic violence allegations that Heard made in the tabloid, including the fact that Depp allegedly held her “hostage” in Australia during a Pirates of the Caribbean shoot.

Following the verdict, Disney officially let him go from the Pirates franchise, much to his loyal fans’ dismay. In fact, the #JusticeForJohnnyDepp campaign has taken off on social media, and the actor has a great deal of support.

Related: Depp Was Once Sued By Business Partner Who Now Remains Mysteriously Missing

Some of these fans are clearly also following the ongoing Scarlett Johansson saga and see similarities.

Another user going by Strawberry Fields, wrote, in part:

They’ve made their money off them [Depp and Johansson] now and don’t care about anything other than that.

Odette replied to the post, noting that fans should start a petition for Depp and Johansson to be cast in a film together.

Bruce Buffer’s Wife chimed in with:

Lol @ Scarelett Johansson suing Disney. Rofl. Maybe it was a breach of contract but that’s karma bc of what you did to Johnny depp

Lol @ Scarelett Johansson suing Disney. Rofl. Maybe it was a breach of contract but that’s karma bc of what you did to Johnny depp so idgaf ☺️

do we know if disney has secured the rights to make a court drama of the #BlackWidow case yet? no? who’s playing scarlett johansson

do we know if disney has secured the rights to make a court drama of the #BlackWidow case yet? no? who's playing scarlett johansson

The irony here, of course, is that there actually is a documentary in the works about the Johnny Depp vs. Amber Heard legal battle.

At this time, Depp’s many supporters are calling for Disney to reconsider casting Margot Robbie in the leading role in the reported Pirates of the Caribbean 6 movie. There is a petition that is over a half-million signatures strong asking the company to recast Depp in his most famous role.

Furthermore, fans of the Warner Bros. Harry Potter spinoff Fantastic Beasts series are boycotting the studio — which fired Depp from his role as Gellert Grindelwald in favor of Mads Mikkelsen — unless Amber Heard is also fired from Aquaman 2, officially titled Aquaman and the Lost Kingdom. Heard is currently filming the sequel movie alongside leading man Jason Momoa.

At this time, it seems unlikely that Depp will return to Pirates of the Caribbean for the sixth time, particularly given that he recently lost his right to appeal the outcome of his original libel lawsuit in the U.K. High Court.

In regard to the former couple’s $50 million civil suit in the U.S., Mr. Depp and Ms. Heard are set to next meet in court in April 2022 in Fairfax, Virginia.

What do you think? Is Scarlett Johansson the next Johnny Depp in Disney’s eyes?