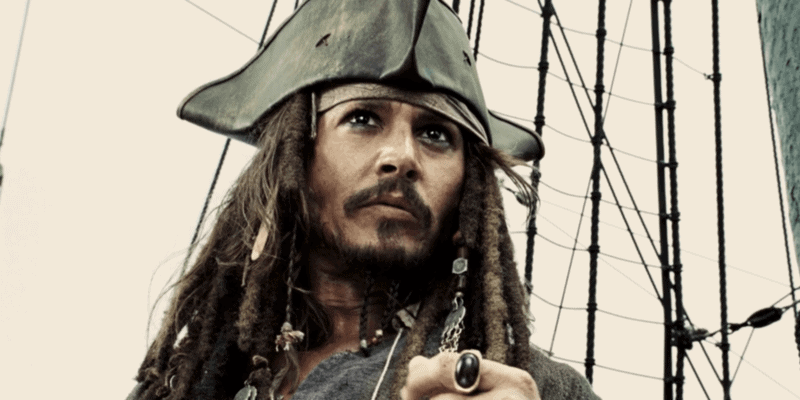 The actor Johnny Depp was once one of the most celebrated names in Hollywood. With his diverse slate of roles, the actor has appeared in many blockbuster roles. Depp’s biggest franchise, at least commercially, is Disney’s Pirates of the Caribbean, which began all the way back in 2003 with Pirates of the Caribbean: The Curse of the Black Pearl.

However, being wrapped up in a shocking domestic abuse allegation and legal battle with his ex-wife, actress Amber Heard, Depp is likely out of his role in the upcoming Pirates 6. Now, one of his Pirates co-stars has spoken out in defense of the Jack Sparrow actor, blasting the film studios and media for their lack of support towards him.

Johnny Depp first appeared as Captain Jack Sparrow almost twenty years ago. Since then, his eccentric pirate has gone on to define the Pirates franchise, successfully leading the swashbuckling epics through five films over the span of fourteen years.

Fans are anxiously waiting to see if Depp will reprise Jack Sparrow in the upcoming Pirates 6 movie. Due to the ongoing legal battle with Amber Heard surrounding domestic violence allegations, Depp was forced to resign from Warner Bros. next installment in the Harry Potter spinoff franchise, JK Rowling’s, Fantastic Beasts and Where to Find Them. Depp brought evil wizard, Gellert Grindelwald, to the big screen in 2016 but due to the court’s ruling in favor of Heard, Depp resigned from the production with Mads Mikkelsen taking over the role.

It is likely that Depp will be out of Disney’s Pirates too. The studio is yet to make any official announcement regarding both Depp and Pirates 6 — although we know that a Margot Robbie Pirates spinoff is in the works. If Depp’s rejected appeal in March this year is anything to go by, it seems unlikely he will return to play the fan-favorite character.

Despite libel cases and defamation suits, one of Depp’s co-stars has once again risen in defense of the Edward Scissorhands actor.

Speaking exclusively to the Express, Greg Ellis — who played Lieutenant Commander Theodore Groves in three of the Pirates feature films, The Curse of the Black Pearl (2003), At World’s End (2007), and On Stranger Tides (2011) — shared information about his new book.

The Respondent: Exposing the Cartel of Family Law charts Ellis’s experience navigating the US divorce court with Depp providing the introduction for the book. Ellis shares that he continues to support his co-star.

“… I have been and will continue to be vocal. Many people have mischaracterized him.”

The Pirates of the Caribbean actor goes on to slam the studios for living in fear of the media.

“Part of it is the fear of media […] Whether it be broadcast, whether it be movie studios, whether it be publishing, there is a fear that the perception of someone is negative, so they don’t want to be associated with that.”

Ellis also weighed in on Depp’s firing from the Fantastic Beasts franchise.

“I do find it ironic that a man who is revered and loved and respected by so many people in the entertainment industry – and have nothing but great things to say about him – should be forcibly removed from a movie.”

As we know, while Depp has alleged that Heard domestically abused him, the courts have ruled in the Aquaman actress’s favor. Recently, Heard came under scrutiny again when James Wan shared the title of Aquaman 2, with fans calling Warner Bros. to #FireAmberHeard.

The issues began in 2016 — one year after the two were married. Since then, Depp has been in a libel trial with the UK publication The Sun and its parent company, News Group Newspapers, after the tabloid newspaper called Depp a “wife-beater”. The actor lost his libel case against The Sun and subsequently lost his appeal in March this year against the court ruling in favor of the British tabloid.

2022 will see Depp and Heard back in court as Depp aims to sue Heard for defamation following her published op-ed in The Washington Post in 2018 detailing her physical abuse.

Whether Disney will wait that long to see if the court finds new evidence in the case remains to be seen. Most recently, #JusticeForJohnnyDepp exploded online after new bodycam footage contradicted Heard’s original testimony of the alleged assault — this reportedly led the actress to be probed by the LAPD.

While Depp’s time as Jack Sparrow hangs in limbo, Ellis hopes to see his return to the big screen as the iconic character.

Jack Sparrow did in fact return without Depp recently in the Sea of Thieves meets Pirates of the Caribbean video game crossover. However, the character returned without the actor that made him famous.

Do you think Johnny Depp will return as Jack Sparrow? Let us know in the comments!