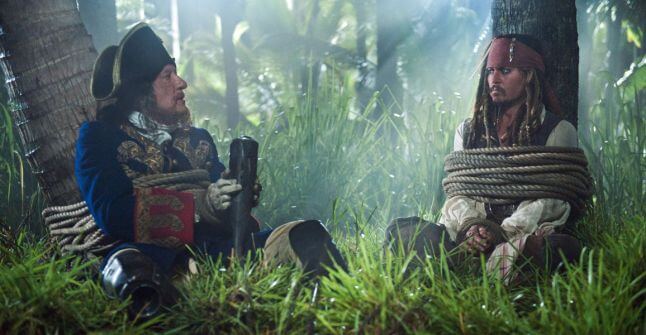 When most Disney fans hear the words “Pirates of the Caribbean”, their minds immediately go to either the popular theme park ride or to the long-running movie franchise that it inspired.

Related: After Court Ruling, Is Johnny Depp Out of  ‘Pirates’ Permanently?

When Pirates of the Caribbean: The Curse of the Black Pearl (2003) released, director Gore Verbinski was told it was “doomed to fail” and star Johnny Depp was hardly a household name in mainstream American entertainment, primarily known for the quirky, often Gothic films he worked on with the always eccentric Tim Burton.

Nonetheless, the very first Pirates began a film franchise empire that is still going today. However, some installments in Captain Jack Sparrow’s saga have been more well-received than others.

Most fans will agree that Pirates of the Caribbean: On Stranger Tides (2011) is the weakest movie in the series. The fourth Pirates film introduced Academy Award-winning Penelope Cruz as Angelica, so it seemed, on paper, to have the potential to be a hit.

However, On Stranger Tides was also the first POTC film that didn’t feature Orlando Bloom as Will Turner and Keira Knightley as Elizabeth Swann — and the production seemingly struggled to find its footing without the onscreen couple.

Geoffrey Rush, however, did reprise his role as the consistently entertaining Captain Hector Barbossa.

Shockingly, despite its poor critical and fan reception, Pirates of the Caribbean: On Stranger Tides remains the most expensive film ever made. Yes, more costly than James Cameron’s three-hour Titanic (1997) or Peter Jackson’s epic Lord of the Rings trilogy (2001-2013).

Related: Are Rover and the Pirates Jail Dog the Same Character?

On Stranger Tides boasted a whopping $379 million production budget — and that’s after a tax credit the production received for shooting in the United Kingdom, with the film’s total cost coming to over $410 million.

On Stranger Tides was shot on a tighter schedule than others in the series, included fewer visual effects shots and production was moved to the UK and Hawaii to take advantage of the tax benefits for films shot there. Despite this, Disney had allowed for a heftier price tag in the budget, and several factors ultimately pushed the film to its record-breaking cost.

Depp himself was one of the most expensive aspects of the production. In his fourth outing as Captain Jack Sparrow, the actor commanded a reported salary of $55 million.

Furthermore, the production crew consisted of 895 people — we knew the credits seemed longer than usual.

The film was also the first in the franchise to be shot almost entirely on 3D cameras, utilizing an improved model of the cameras used on 2009’s 3D epic, Avatar. Shooting in 3D, rather than converting the film to it in post-production, is a more complex and costly process than standard shooting. Furthermore, the logistics of shooting at sea often drive up the cost of any film. While Disney had tried to minimize the number of scenes shot at sea for budgetary reasons, this was always going to be a factor for a film called On Stranger Tides.

No matter what your personal opinion is of On Stranger Tides, it’s worth noting that the swashbuckling movie grossed $1.045 billion at the global box office.

Pirates Of The Caribbean: On Stranger Tides is a tale of truth, betrayal, youth, demise – and mermaids! When Jack Sparrow crosses paths with a woman from his past, he’s not sure if it’s love, or if she’s a ruthless con artist using him to find the fabled Fountain of Youth. Forced aboard the ship of the most feared pirate ever, Jack doesn’t know who to fear more – Blackbeard or the woman from his past.

Although a sixth Pirates of the Caribbean is reportedly in the works, it is likely it will happen without Johnny Depp reprising his role as Captain Jack Sparrow one more time.

Depp’s personal life has recently been tinged with drama amid his divorce from ex-wife Amber Heard and his libel lawsuit against U.K. News Group Newspaper publication, The Sun.

If you haven’t been following the situation, Heard previously alleged that Depp had engaged in domestic violence against her on multiple occasions in an issue of the tabloid newspaper. This led to the libel case that concluded last fall, with Depp losing.

The Hollywood actor recently learned he cannot appeal the ruling in the United Kingdom. However, there is the possibility that his $50 million civil suit against Aquaman actress Heard will be thrown out in the United States, though nothing has been decided at this point.

Currently, both Walt Disney Studios and Warner Bros. have dropped Depp amid his personal legal issues. At this time, Margot Robbie is expected to helm Pirates of the Caribbean 6 and Mads Mikkelsen has taken over as Gellert Grindelwald in the Harry Potter Fantastic Beasts spinoff series.

The most recent POTC installment was Pirates of the Caribbean: Dead Men Tell No Tales (2017).

Would you have guessed On Stranger Tides is the most expensive movie ever made?