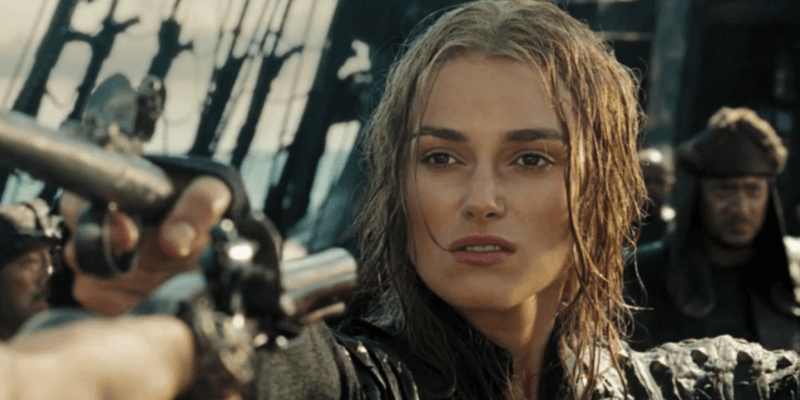 When you think of pirate movies, Disney’s Pirates of the Caribbean franchise is often what comes to mind. With storylines that are filled with adventure, laughter, and romance, it was almost every kid’s dream to helm the Black Pearl.

Kiera Knightley played Elizabeth Swann in four Pirates of the Caribbean films: The Curse of the Black Pearl (2003) and three of its sequels, Dead Man’s Chest (2006), At World’s End (2007) and Dead Men Tell No Tales (2017). Coming from Star Wars: The Phantom Menace at age 14, and then Love, Actually at age 18, Knightley was no newcomer when it came to working with veteran actors. That being said, she was about to have the chance to act alongside Johnny Depp (Captain Jack Sparrow) and join what would ultimately become one of Disney’s most popular franchises.

However, the actor did not originally think she wanted to play the daughter of a Governor turned pirate. Knightley spoke with podcast Chanel Connects, where she admitted that Elizabeth Swann, alongside a few of her other big blockbuster roles, was not what she originally sought out when wanting to become an actor.

I’m incredibly fortunate. You know, I’m now playing the roles that I dreamed I would be playing when I was a kid. And actually a lot of the scripts that I am being sent are the kind of incredibly juicy, really interesting, multi-faceted women. I think that’s partly my age. I’m in my mid-thirties. I still say I understand how unbelievably lucky I was to be in a position to get to be in those incredibly big blockbusters. But it was never what I wanted from the profession. It was always getting to do those characters that are complicated, interesting, strange.

So it was not that Knightley didn’t want to plan Swann, a character who was surely “complicated, interesting, strange”, but rather that she did not crave the fame and fandom that comes with the Pirates of the Caribbean fandom. That being said, Knightley has stepped away from the Pirates franchise.

Disney is planning on doing a Pirates of the Caribbean 6 film that will reportedly be female-centered but will not include Knightley. Margot Robbie is set to helm the films’ ship, taking the reins of a “Jack Sparrow” type role as Johnny Depp is currently walking a tightrope with Disney in regard to reprising his role in the Pirates franchise.