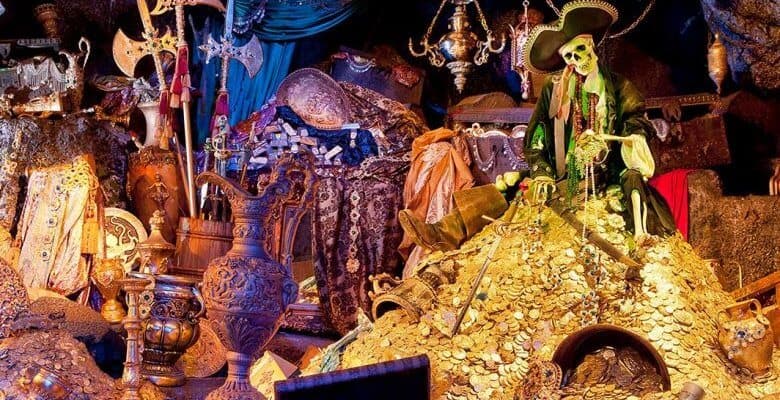 Disney is known for being in the business of storytelling, especially in through their Park experiences. One great example of this is Disney’s Pirates of the Caribbean attraction. For over 50 years, this ride has been sailing Guests through a thrilling adventure that the whole family can enjoy! Now, families visiting Disney Parks around the world can experience the magic that is the Pirates of the Caribbean.

Pirates of the Caribbean Attractions

The swashbuckling, dark ride adventure we know and love today began development after Walt Disney and his team attended the 1964-1965 New York World’s Fair. It was at the World’s Fair that they learned that the best way to tell this story was through the use of a new kind of technology, audio-animatronics. This technology would go on to become a hallmark of Disney theme park rides, not only in Pirates of the Caribbean, but other famous attractions, too.

In Pirates, though, animatronic figures even play a role in bringing one of the most recognizable songs of all time to life — “Yo ho, yo ho, a pirate’s life for me”! And, eventually, Pirates of the Caribbean audio-animatronic characters and their scenes would inspire one of the biggest film franchises starring Johnny Depp, Orlando Bloom, and Keira Knightley, for the Walt Disney Company.

In 2003, Disney released one their first Pirates of the Caribbean film, The Curse of the Black Pearl, inspired by the attraction. In turn, the film would inspire the ride and changes took place in 2006. The famous and cunning Captain Jack Sparrow (Johnny Depp) and his shipmate Captain Hector Barbossa (Geoffrey Rush) were added to the attractions. After this, the attraction became an ever bigger hit to Disney fans and Park goers.

Disneyland Paris in Marne-la-Vallée, France – What makes the Disneyland Paris attraction unique is that it was the first to change the original “auction for a bride” scene. In 2017, the attraction set sail with new pirates including Captain Barbossa — who was already featured at Disneyland and Walt Disney World versions of the ride — and pirate Redd/”The Readhead” who now helps the townspeople unload their items for an auction.

Per the Disney Fandom Wiki, Redd has quite a history:

Redd was a woman Irish background who inhabited the Caribbean during the 18th century. She came to be a pirate and found employment as a member of the crew of the Wicked Wench, notably in working as a smart-mouthed gun for the Auctioneer.

At some point in the 1710s, the Wicked Wench travelled to the port of Puerto Dorado on the island of Isla Tesoro in a race for the island’s legendary treasure with their rival Captain Jack Sparrow.

Cannonballs flying across your boat and splashing into the sea… The rough voices of pirates shouting … No matter how many times you’ve experienced it you still get the first-time thrills from this dynamic attraction ? Pirates of the Caribbean. Captain Jack Sparrow from Disney’s live action film, Pirates of the Caribbean, and other unique pirates make an appearance in this masterpiece that fires the imagination. You can’t talk about a world of adventure until you’ve experience this attraction.

Shanghai Disneyland in Shanghai, China – The most recent adaptation of the Pirates of the Caribbean attraction is located at Shanghai Disneyland. The ride is located at Treasure Cove at the Shanghai Park and is named Pirates of the Caribbean: Battle for the Sunken Treasure. Probably the most impressive feature of the attraction is the ride vehicle itself. These boats can move forward, backwards, and even sideways! 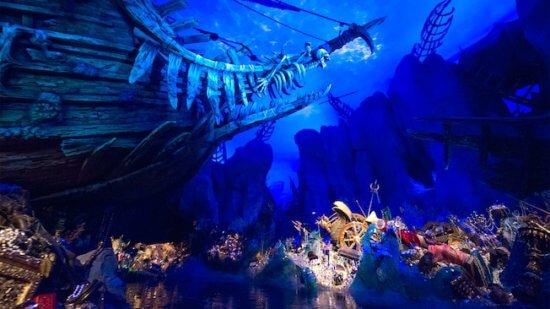 This attraction is fully original as it’s inspiration stems from the Pirates of the Caribbean film franchise! At the Battle for the Sunken Treasure, you’ll encounter mermaids, a Graveyard of Lost Ships, and the fearsome Davy Jones.

It is officially described as:

Cruise Treasure Cove with the most charismatic rogue ever to rock the Jolly Roger—the devilishly dashing Captain Jack!

Set sail for seafaring fun that takes you on, over and under the deep blue in search of Davy Jones’ sunken plunder—all while crossing paths with pirates, mermaids and even the savage Kraken.

Landlubbers leave from the Royal Navy’s former fortress and embark on a course that passes through the mysterious Voodoo Alley and Jack’s own secret sanctuary—the Caves of Misfortune—before hitting the briny depths. From a face-to-face with some of the world’s saltiest sea dogs to dreaming of those coveted doubloons, you’ll surely “shiver ye timbers” during this rollicking romp!

Restaurants near the Pirates of the Caribbean ride

One great thing about most of these attractions is that they are often paired with a great Disney Parks dining location!

The Blue Bayou (Disneyland Resort) – At the original Disneyland Resort, one of the most sought after dining experiences is within the Pirates of the Caribbean ride. The Blue Bayou offers classic Cajun and Creole cuisine while you embrace the ambiance of the bayou. Best of all, you get to watch the attraction boats sail by! In 2021, it was announced that this restaurant would become only the second location in Disneyland Park to sell alcoholic beverages.

Getting a dining reservation for the Blue Bayou can be difficult, but it is definitely not impossible. Reservations can be made up to 60 days prior to your visit. Sometimes, Guests can snag a same-day reservation, but reserving your table in advance at any sit-down Disney Parks dining location is advisable.

Barbossa’s Bounty (Shanghai Disneyland) – Located at Shanghai Disneyland alongside Pirates of the Caribbean: Battle for the Sunken Treasure attraction, Barbossa’s Bounty is a one-of-a-kind dining location. Guests can watch as boats sail off to battle while enjoying some delicious Asian cuisine. Unlike Disneyland’s Blue Bayou, this dining location is more along the lines of a quick-service option with plenty of seating and lots to choose from on the menu.

Captain Jack’s: Restaurant des Pirates (Disneyland Paris) – Disneyland Paris Guests can enjoy delicious Creole dishes all while sitting lagoon-side. This dining spot overlooks the European Pirates of the Caribbean attraction. Reservations are highly encouraged for this dining location and can be made by phone or online at the Disneyland Paris website.

Blue Bayou (Tokyo Disneyland) – Just like the original Pirates of the Caribbean at Anaheim’s Disneyland Resort, Tokyo’s Blue Bayou Restaurant is located inside the attraction. Guests can enjoy a romantic full course meal while fireflies sparkle above. This restaurant also offers priority seating with a great view of the attraction. In order to ensure you get priority seating, advance reservations are highly recommended. Guests can make reservations using the Tokyo Disneyland website.

Why is the Pirates of the Caribbean ride so popular?

So, why Pirates of the Caribbean? As the last attraction that Walt Disney worked on before his passing, the attraction still has this historically significant sense to it. It’s ride route is simple and familiar and that offers a comfortable nostalgia for Guests. However, the drops offer a bit of thrill just enough to entice more adventurous travelers. There is no age or height requirement, which allows all members of your family to enjoy this swashbuckling cruise. For the past 50 years — and, undoubtedly, for 50 years to come — Pirates of the Caribbean will remain a tried and true classic Disney attraction.

Related: The global phenomenon that is Disney’s Pirates of the Caribbean

Want to visit the Pirates of the Caribbean attraction at Disney Parks around the world? Let Academy Travel help you with your vacation planning!