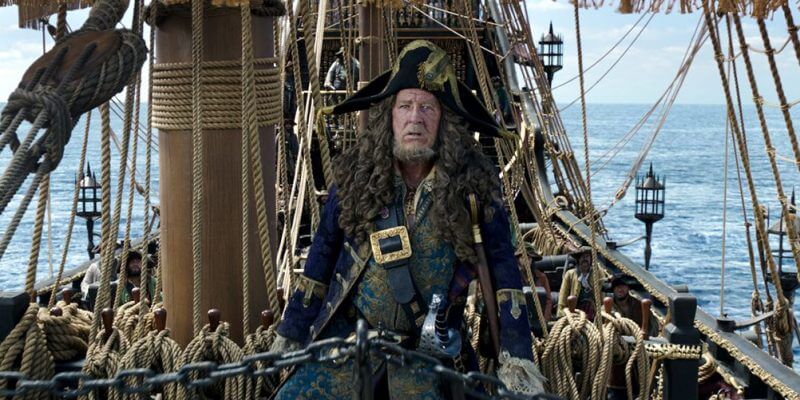 Geoffrey Rush is an internationally-acclaimed Australian actor best known for his work in the 1996 David Helfgott biopic “Shine,” the 1998 drama “Shakespeare in Love” and the 2010 historical piece “The King’s Speech.” He is one of the very few performers to have ever won the “Triple Crown” of American acting awards: the Academy Award, the Emmy Award, and the Tony Award.

Since 2003, Rush has also famously played the gruff Captain Hector Barbossa in Disney’s “Pirates of the Caribbean” movie franchise, and he reprises the role once again in this week’s new release “Pirates of the Caribbean: Dead Men Tell No Tales,” the fifth entry in the blockbuster series. I had the opportunity to sit down with Geoffrey Rush (and a few other reporters) last weekend to discuss his approach to Barbossa.

Q:  How did you come to be involved with the original “Pirates of the Caribbean” movie?

GEOFFREY RUSH:  Everyone had sort of poo-pooed the idea of a pirate movie, because I think it had been half a century since there had been a popular one. But the script was great. I originally had turned it down because I had committed to work with a longtime colleague director in a theater in Australia, and we were planning to do a production of “Waiting for Godot.”

So I remember writing a four-page email to my agent and it was titled something like “‘I hope you’ve got a strong cup of coffee and you’re sitting down…’ I have to politely, regretfully decline the offer. It’s a wonderful script, but I’m committed to this.” He then wrote me back an email that was about ten times longer, telling me “No no no, you are going to do this project.” So that’s where fate comes in. I wrote to all my colleagues and said, “I’m sorry I’m bailing out; I’m not doing it because I don’t like you. But there’s an opportunity that’s come up that I think is a very important career maneuver.”

I hadn’t really worked in the big studio world, and here was a massive, vibrant, eccentric character that was kind of right up my alley. So I chose to do it. 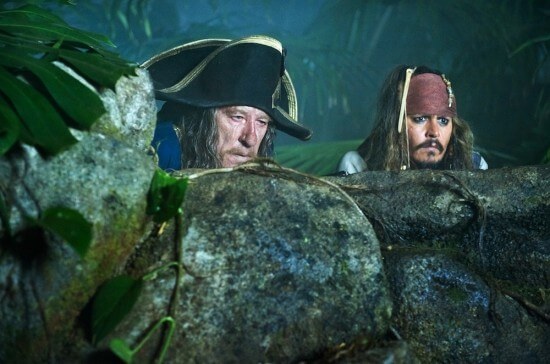 Q:  What was your reaction to first seeing Johnny Depp performing as Jack Sparrow?

RUSH:  When Johnny and I met, he blew me away. I was a big fan of his [and] I had never met him before. We met about ten days before shooting, and we were all in pre-production, with costume fittings and makeup tests and all that sort of stuff. We were talking about [how to approach the characters, and] he said, “We can’t do stereotypes here. We’ve got to create characters that are going to really surprise people.”

And he started taking about Keith Richards and the Rolling Stones, and I went, “That’s a good way of thinking of it.” It’s like when I did the Einstein project [the 2017 “Genius” series for National Geographic] I thought, “I guess I can watch all the footage and the news reels, but I don’t want to just do a piece of mimicry.” So I treated the Einstein character [as] “What if he was fictional, and he just happened to be around in the most extraordinary period of science, and two World Wars, and [was] a good central hero?” 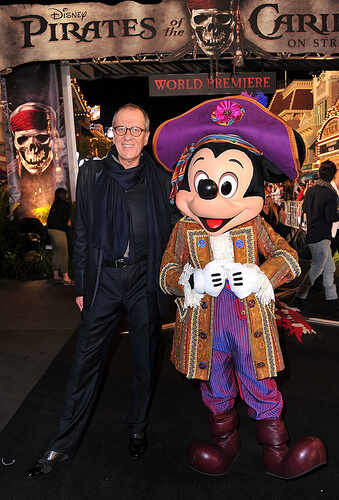 RUSH:  And Johnny started talking about “Well, what do [pirates] do? They drink a lot of rum, because the water’s terrible. And they’re in the sun all the time.” He said, “Their brains must be fried.” And he said, “We spend half our time on land, and half our time on a boat.'” And he started toying with the idea that Jack Sparrow never gets his land legs or his sea legs right. And I went, “This is great.”

For a guy that had made ‘Edward Scissorhands’ and had made ‘What’s Eating Gilbert Grape?’ he was going into what became a tentpole blockbuster summer release with complete irreverent imaginative actorial thinking. Because that’s the kind of guy he is. And they were shocked. People were shocked when the first dailies came back, they went, “Where’s the Errol Flynn quality that we were looking for?” And bless him, he got an Oscar nomination for Best Actor.

RUSH:  Johnny’s quite a shy guy, [but] he does have a very absurdist sense of humor. My favorite line in “Dead Men Tell No Tales” is [when] we finally meet, where [Jack Sparrow] has been shanghaied into this wedding. I manage to come in and save him, and we always play around with our opening dialogue, meeting up many years later. And I said, “Ah, Jack. I knew we’d meet up again.” And the first thing he said, which was an ad-lib on the day, [was] “Did you bring me a present?” That’s pure Johnny.

RUSH:  I treat them all the same. Someone like Barbossa, I looked at what the qualities are. He was described in the first film as “spat out of the mouth of hell” and I thought, “Wow, whenever you enter this film, you’ve got to bring that on.” And [costume designer] Penny Rose had given me a very flamboyant [outfit]. I was like a glam rock star from another era.

There was a pomposity and an arrogance and a narcissism [to him]. I liked that I had a monkey, not a parrot. Everything just felt [like] we were creating surprises for people. I did end up with a wooden leg [in the fourth movie “On Stranger Tides”], but I also thought, “That’s great,” because I now use the crutch as a weapon. If you’re going to be as old as Barbossa, he has to be a kick-ass fighter, otherwise he’d be dead. 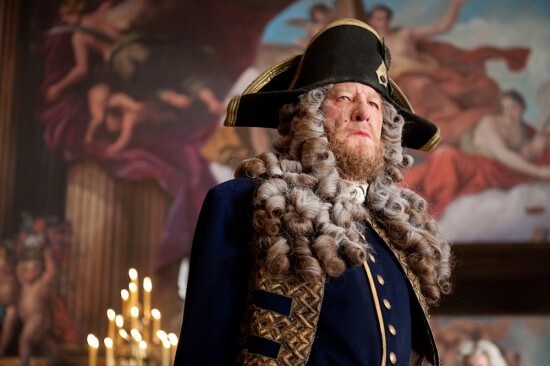 Q:  Can you talk about the evolution of Barbossa over the five movies? How do you keep the performance fresh and interesting for yourself?

RUSH:  It’s been kept fresh and interesting for me by the writers. Ted Elliott and Terry Rossio, who wrote the first four [“Pirates of the Caribbean” movies], they’d done “The Mark of Zorro,” which I’d seen. And they did “Shrek.” And I just went, “Wow, these guys are really original. Their structure, for so-called popcorn movies, they are brilliantly written.”

Of course, on the first film I got shot, and I went home [and thought], “Well, that was fun. That was nice.” Then [“Pirates” 1-3 director] Gore Verbinski phoned me up and said, “We’re going to shift parts two and three to Asia, and we’re not going to just repeat the same sausage factory idea.” Jerry Bruckheimer is a very bold and creative producer on that level. And he said, “We’re going to bring you back.” I said, “What? From the dead?” And he said, “Yeah, with voodoo.” And I said, “You can’t just go, ‘We want him back because he’s popular.'”

But there was a purpose in that, in that I had to get all of the global pirate lords together to break Tia Dalma’s curse– her association with Davy Jones. So I became the politician, and I liked that. And I think Barbossa’s vanity liked the power. I was going to get the G20 of global pirates together. [laughs] And then I got to work for the king in the next film, and in this one [“Dead Men Tell No Tales”] I’ve become a corporate CEO. A vulgarly wealthy pirate. His taste is apalling. If he’d only spent some of the money on dental hygeine, or his skin… 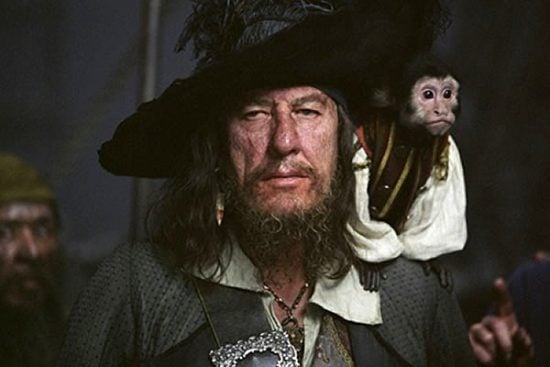 Q:  Are there any other qualities that you feel define the character of Barbossa?

RUSH:  It’s the hat, ultimately. From the very first costume fitting, I loved what Penny Rose offered, and we played around with the bling, and “What [accessories] would he have?” Because pirates always set up their brand and their identity to scare other pirates. Language was one [of those identifiers]. He’s a very supercilious character that puts people down with verbosity. Like, “I’m disinclined to acquiesce to your request. It means no.” And I loved all of that.

[But] we discovered in the very first costume fitting the moment the hat came off, the character kind of disappeared. That’s the brain. That’s the vanity and elegance that he thinks he’s presenting– the superiority. And there was one shot in the third film [“At World’s End”] where the boat goes off the edge of the world and turns upside-down. This was only for the fans, really, there’s about a two-second flash where I’m found on the deck without my hat. [he mimes grabbing for the hat and scrambling to put it back on his head]

Q:  Is there any truth to the rumor that Johnny Depp came up with Barbossa’s first name Hector?

RUSH:  He, I think rather facetiously, mentioned that in an interview. He said, “Well, I call him Hector.” And I think Johnny thought Hector is a bit like calling somebody Cyrill. He thought he was diminishing Barbossa.

He was originally going to be called Blackbeard in the first draft I read, and [the change] was that whole thing of breaking the cliches and finding the archetypes, not the stereotypes. I always thought, “Well, Barbossa obviosly is a stage name.” And I looked at that on the first film and I went, “He’s very clever.” And I thought, “Barbossa’s a great name, because ‘barb’ is French for beard, and it’s got the word ‘boss’ in there, and there’s the Barbary Coast.” But it’s like he chose, “I want to be Beyoncé. I need a good single name.”

And Johnny threw in Hector, and I went, “Well actually, that’s a classical Greek warrior’s name, so I’ve won yet again.” 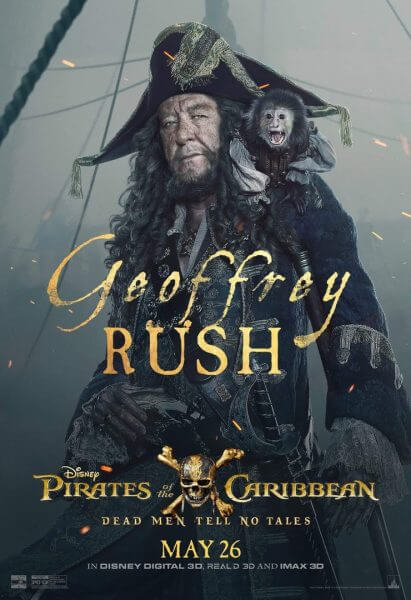 Comments Off on INTERVIEW: Geoffrey Rush discusses the importance of Barbossa’s hat in “Pirates of the Caribbean: Dead Men Tell No Tales”