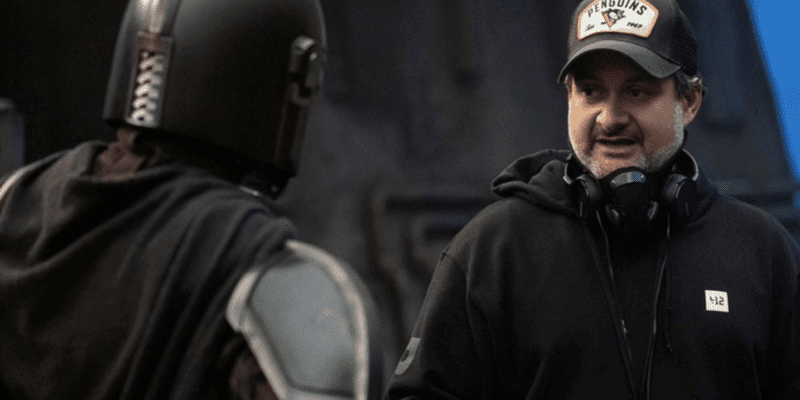 Ever since Dave Filoni first worked alongside George Lucas to create animated series Star Wars: The Clone Wars, he has had a devoted following within the Star Wars fan community.

He also, of course, was truly put on the map when he became the executive producer of Jon Favreau’s The Mandalorian. After the live-action Star Wars series debuted on the Disney+ streaming service in November 2019, it quickly became a pop culture sensation, thanks to the existence of Grogu (AKA “Baby Yoda”) and his unlikely father figure, bounty hunter Din Djarin (Pedro Pascal).

A “fan’s fan”, Filoni has long been able to bring a certain authenticity to the Star Wars universe that many would argue has been lacking since Lucas sold Lucasfilm, Ltd. to The Walt Disney Company in 2012. Filoni understands what Star Wars fans want, because it’s what he wants himself — he is devoted to good characters and great storytelling, just the way the galaxy should be.

Now, producer and writer Jennifer Corbett has opened up about what it was like to work with Dave Filoni on his latest foray into animation, Star Wars: The Bad Batch.

Related: ‘Star Wars’ Decodes How They Decide Which Characters to Bring Back

She spoke to StarWars.com, first sharing an anecdote about her time as a freelancer on the Resistance series, the first time she worked with Filoni:

…she penned three episodes of Star Wars Resistance, including the Season 2 episode “Rendezvous Point” that introduced Venisa Doza, mother of Ace pilot Torra Doza and Resistance hero, as she was captured by the First Order…“The ending of that episode was supposed to be a little different. Venisa was supposed to be reunited with Torra and Captain Doza at the end of the episode,” Corbett recalls. “One of the notes from Filoni was while that’s a nice ending it doesn’t feel real, because it feels like then kids will think when something bad happens it’s going to be fixed immediately. But the story you want to teach them is that you have to have hope and if you hold onto hope anything can happen.”

Corbett continued, letting fans in on the one thing Filoni “always says” in the writers’ room:

“I can’t list all the great advice. You just try to soak it in. He’s always saying keep it to what George [Lucas] created Star Wars to be. If you don’t veer from that too much then it’s going to work.”

Next up for Filoni? The continuation of he and Favreau’s The Mandalorian saga, including Season 3 of the hit series, spinoff Ahsoka, and The Book of Boba Fett, which will debut in December 2021.

Although Pedro Pascal’s Din Djarin, Ming-Na Wen’s Fennec Shand, Temuera Morrison’s Boba Fett, and Rosario Dawson’s Ahsoka Tano are the only characters confirmed to be returning to The Mandalorian and its various spinoffs moving forward, it is likely that both Bo-Katan Kryze (Katee Sackhoff) and Moff Gideon (Giancarlo Esposito) will also return.

More on The Bad Batch

Ultimately, Clone Force 99 watches as Crosshair succumbs to his inhibitor chip and becomes an Imperial Commander, leaving them to escape Kamino with Omega, a young female clone who may hold the key to a lot of secrets within a galaxy far, far away — including, perhaps, Supreme Leader Snoke’s existence in the Star Wars sequel trilogy.

And, the fun is just beginning.

What do you think about Filoni’s commitment to keeping the Star Wars universe the way George Lucas intended it to be?

You can currently catch Star Wars: The Bad Batch streaming on Disney+ every Friday.