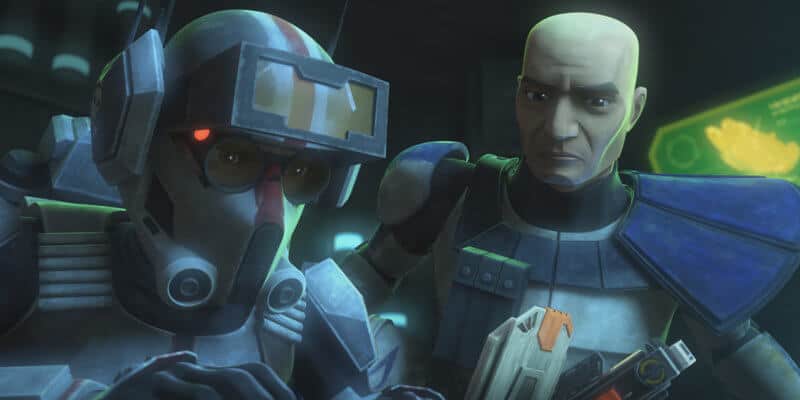 If you’ve watched Star Wars anytime since the original trilogy began with Episode IV – A New Hope (1977), you know that cameos are a big deal. For Star Wars fans, seeing our favorite characters again in new series or feature films is one of the most enjoyable things about loving a galaxy far, far away.

Now, The Bad Batch producer and writer Jennifer Corbett has shared details about how she, supervising director Brad Rau, and series creator Dave Filoni decide which characters should be brought back in their latest Star Wars show.

“We always just want to make sure that whoever we’re bringing in into these stories is serving the Bad Batch’s story. So when you’re talking about the rise of the Empire, who is actually – in a character sense – thriving at that time? Out in the galaxy, who can the Batch cross paths with that actually makes sense? From Bib [Fortuna], you know – and Cid is a very shady character, so through the list of her contacts, it makes sense that she would have some kind of underworld connections. Right now is a time bounty hunters are thriving, I imagine, in the galaxy, so it was an interesting opportunity to be able to bring Fennec [Shand], who is new to the scene. And then when we bring in Cad Bane, just to see the difference in how the two of them operate – because, again, it made sense for the storyline with Omega and the Batch, and when we’re talking about bounty hunters, to organically bring those two in.”

Far from being simple fan service — which, admittedly, Favreau and Filoni’s The Mandalorian has perfected with the introduction of live-action versions of characters like Bo-Katan Kryze (Katee Sackhoff) and Ahsoka Tano (Rosario Dawson) — the team behind The Bad Batch didn’t just bring back existing characters, like Mando’s Fennec Shand (Ming-Na Wen) and the original trilogy’s Bib Fortuna (Michael Carter).

They also created new ones, including Cid (Rhea Perlman), who perfectly advance Clone Force 99’s story — and even pave the way for thrilling cameos like clone trooper Captain Rex (Dee Bradley Baker) in Episode 7 (“Battle Scars”) and unexpected appearances, such as the Martez sisters, Trace and Rafa, in Episode 6 (“Decommissioned”).

Now that Hunter, Wrecker, Tech, Echo, and young female clone Omega have once again encountered Crosshair, who succumbed to his inhibitor chip and became an Imperial Commander, the second half of the season is sure to be rife with even more exciting appearances from Star Wars characters we’ve come to know and love, and those newcomers who are specifically designed to weave them perfectly into Clone Force 99’s story.

As Cid continues sending the elite squad on mercenary missions around the Star Wars galaxy, who knows which iconic characters we could encounter next? There’s a strong case that our Clone Army remnant could stumble upon Boba Fett…

What are your thoughts on how Dave Filoni’s team decides who gets to make cameos in The Bad Batch?