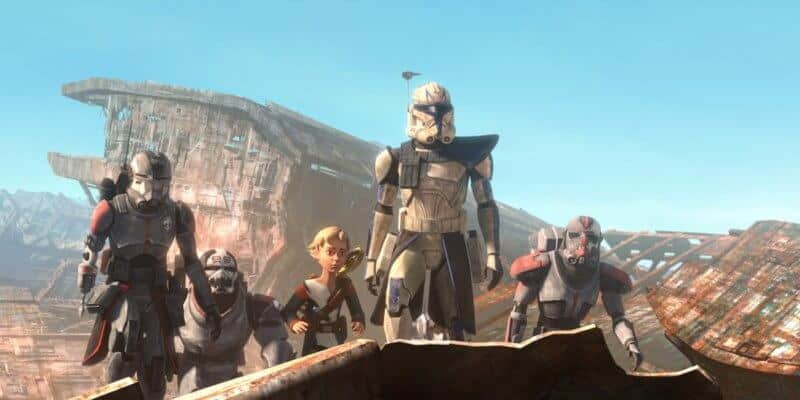 When Dave Filoni’s newest animated series, Star Wars: The Bad Batch, premiered with Episode 1, “The Aftermath”, we picked up right where Star Wars: The Clone Wars left off — with the execution of Emperor Palpatine’s Order 66.

Because of the “defective” clones genetic modifications, their inhibitor chips did not activate in the same way as the “regs” (except for Crosshair, but that’s another story), leaving Hunter and his squad dumbfounded by the absolute chaos around them.

Hunter saves Billaba’s Padawan Caleb Dume — later Kanan Jarrus (Freddie Prinze, Jr.) in Star Wars Rebels — and finds himself in a whole new world by the time he and his team arrive back on Kamino.

Soon after discovering that Chancellor Sheev Palpatine has declared himself Emperor, effectively ending the Clone Wars, Clone Force 99 encounters Omega, a young female clone who ultimately changes the trajectory of their entire existence.

When Crosshair gives into his inhibitor chip and becomes an Imperial Commander, Omega ends up joining the team — and quickly becomes the center of the clone troopers’ lives. She also serves as a tool for Filoni to explain exactly how inhibitor chips work.

In Episode 7, “Battle Scars”, clone trooper Wrecker — who has an especially close relationship with Omega — succumbs to his malfunctioning inhibitor chip and we are given our first real look at exactly how powerless clone troopers are when they are under the control of these implants.

Despite Omega’s pleas, Wrecker is determined to kill her as a “traitor” to the Empire — after all, “Good soldiers follow orders.”

Fortunately, Captain Rex (Dee Bradley Baker) has returned thanks to Clone Wars characters, the Martez sisters — Trace and Rafa — who made a cameo appearance in Episode 6, “Decommissioned”.

Rex and Clone Force 99 ultimately manage to subdue Wrecker and remove his inhibitor chip in a defunct Jedi cruiser on Bracca that still has the necessary medical equipment to perform the procedure — the same way Ahsoka Tano (Ashley Eckstein) removed Rex’s when he tried to kill her en route to Coruscant.

In the latest episode, the mid-season installment, the biggest reveal was the return of bounty hunter Cad Bane (Corey Burton), which ended up overshadowing another crucial unveiling — the fact that another war, of sorts, has begun within the ranks of the clone troopers.

Some are questioning if the use of lethal force against clones who are under the control of their inhibitor chips is unethical.

When fighting against brainwashed clones in previous episodes, the Bad Batch didn’t use lethal force, incapacitating their brothers with hand-to-hand combat or blasters set for stun. In [Episode 8] “Reunion,” the commandos are explicitly shown blasting Imperial clones with weapons set for kill, and Wrecker throws two clones off a ledge to their deaths.

In reality, though, this course of action is not unethical, but a matter of survival. With every episode of The Bad Batch, we are learning more about how Order 66 actually impacted the Clone Army of the Republic. After witnessing both Crosshair and Wrecker succumb to the power of their inhibitor chips — now fully knowing that their clone brothers were not able to control their actions — Hunter and his elite squad are doing the only thing they can do to stay alive.

Killing clone troopers at this point in the season is not a matter of ethics, but a matter of sheer survival — and, in war, surviving trumps everything else. As Hunter told Rex, “I have to do what’s best for my squad”.

As Hunter faces the most uncertain times the galaxy has ever known, he is quickly learning that “what’s best” may be taking mercenary missions from Cid (Rhea Perlman) on Pantora, or it may be killing his brethren who no longer have control of their actions — a tragic situation, but a necessary one to live to see another day.

Furthermore, Clone Force 99 had not had a particularly good experience with the “regs”, as evidenced by the cafeteria scene in the debut episode of the Star Wars series. So, it’s not surprising that Wrecker takes the opportunity to unleash his undoubtedly pent-up rage against another one of Jango Fett’s genetic doubles.

For years, Star Wars fans thought they fully understood the implications of Order 66, but with every installment of The Bad Batch, we are discovering that what we saw when Anakin Skywalker (Hayden Christensen) killed the younglings at the Jedi Temple in Star Wars: Episode III – Revenge of the Sith (2005) and what we learned about Grogu (AKA “Baby Yoda”) from Ahsoka Tano (Rosario Dawson) in The Mandalorian Season 2, is only the tip of the iceberg.

Dave Filoni is effectively changing everything we thought we knew about the biggest event in Star Wars history every time we see clone troopers with inhibitor chips interact with those who no longer have them, and this is still just the beginning of the story within the Star Wars universe.

Are you enjoying our journey with Clone Force 99 in The Bad Batch so far?