Disney World Hypes Up 2021 Experiences, Festivals, and More! - Inside the Magic 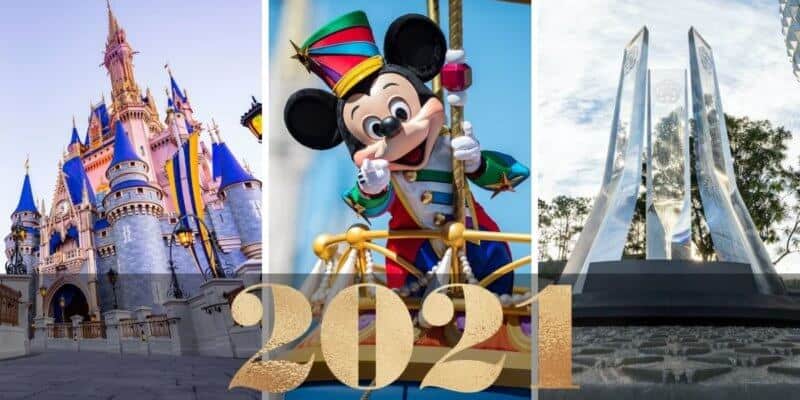 The year 2021 is a very special one for Walt Disney World — it’s the 50th anniversary of the Resort!

Though Disney has not yet made any specific announcements for the 50th-anniversary celebrations as of late, we already know of some incredible and unique experiences that will be available for Guests throughout the New Year. Let’s take a look at what’s to come in 2021 at Walt Disney World Resort and what Guests can look forward to, courtesy of Disney Parks Blog.

Cinderella Castle, the iconic centerpiece for Magic Kingdom park at Walt Disney World Resort, has gotten a complete makeover in honor of this year’s 70th anniversary of the Walt Disney animated film Cinderella. The Castle is now glowing with a gorgeous pink painting and gold detailing.

Explore the Taste of EPCOT International Festival of the Arts

From January 8 through February 22, Guests are invited to an experience a visual, performance, and culinary arts festival throughout EPCOT.

The Reimagined Entrance Fountain at EPCOT

EPCOT is undergoing a huge transformation as the theme park reimagines what was known as Future World into three new sections — World Discovery, World Nature, and World Celebration. Along with the transformation comes a brand new park entrance featuring a stunning fountain and pylons, which compliment the park’s icon — Spaceship Earth.

Disney will be bringing back its iconic character topiaries as well as over 20 Outdoor Kitchens for Guests to stop and try a bite to eat from various locations “around the world.” The 2021 EPCOT International Flower and Garden Festival will debut on March 3, 2021, and run through July 5, 2021.

This highly anticipated attraction will open in 2021.

Though it debuted in 2020, this attraction is still new to so many Guests. The official description of this Walt Disney World attraction reads:

Travel to a Galaxy Far, Far Away

If you are an animal lover, you’ll want to check out the latest addition to Harambe Wildlife Reserve — Nigerian dwarf goats!

The Cuteness of Baby Animals at Disney’s Animal Kingdom

While aboard Kilimanjaro Safaris Guests may spot some new baby animals, including a young Masai giraffe!

Guests can get excited for the soon-to-be M&M’S store as well as the recently opened Everglazed Donuts & Cold Brew, both located at Disney Springs.

Disney Parks Blog has confirmed that Cirque du Soleil’s new show Drawn to Life will be debuting at Disney World in 2021!

Guests can once again visit Blizzard Beach when it reopens on March 7, 2021!

Though we can’t give Mickey a hug, we can still spot some of our favorite Disney characters inside the theme parks on cavalcades, caravans, flotillas, or even at special “pop-up” appearances. Also, be on the lookout because some characters will appear on the occasional special surprise at Disney Resort hotels as well!

Park Hopping has returned to Walt Disney World, but it has been modified and has its own restrictions. For example, Guests can not enter their second theme park of the day before 2 PM, and the theme parks are still being held to the 35% capacity limit.

As Walt Disney World continues its phased reopening, the Resort is bringing several restaurants back to regular operations including Crystal Palace and Chef Mickey’s!

Fresh Pixie Dust at the Entrances to Walt Disney World

Walt Disney World Resort’s famous entry arch is even more magical — thanks to a coat of fresh paint! The sign is being reimagined so it closely matches the recent royal makeover of Cinderella Castle at Magic Kingdom.

Florida Residents Can Take Advantage of a Special Ticket Offer

Available now, the four-day Florida Resident Discover Disney Ticket invites Floridians to visit any of the four Disney parks through June 18, 2021 (subject to block out dates), for $199 (plus tax). For more details on this special offer, click here.

If you want to visit Disney World on your next vacation, but need help planning, don’t hesitate to reach out to our friends over at Academy Travel. Get started by clicking here!

Which experience will you be taking advantage of in 2021? Let us know in the comments below.