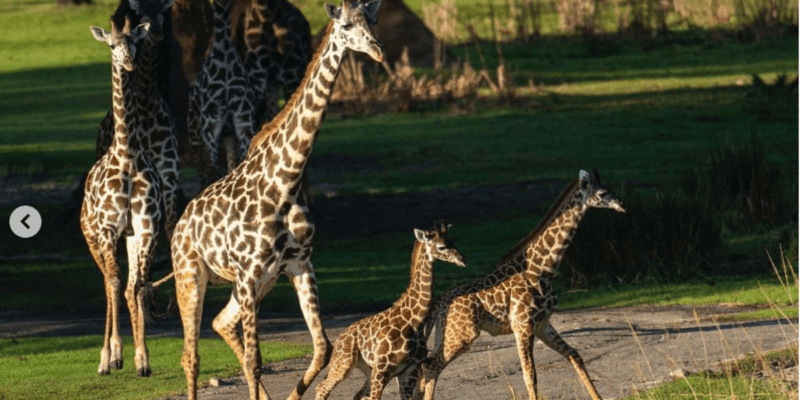 Click here to enter our 25 days of giveaways and win a WDW trip!

Their names are Maple and Zella, and they made their Safari debut yesterday, December 3.

Dr. Mark Penning of Disney’s Animal Kingdom shared some pictures of the babies on his Instagram, saying:

It was an exciting morning at Kilimanjaro Safaris as giraffe calves, Maple and Zella, joined our family of Masai giraffes on savanna at @Disney’s Animal Kingdom. ?

Born just a couple of months ago, these two have spent a lot of time bonding backstage with their moms Mara and Willow, but this morning they joined the rest of the tower (family of giraffes) and were greeted by a few friendly neighbors, including zebra, wildebeest and springbok. The two baby besties took their time exploring their surroundings, staying near their moms and aunts, but also running around with the older “kids.”

#DidYouKnow that Maple’s name was chosen because keepers noticed one of the spots on her skin resembles a maple leaf? Also, Zella’s name means “beautiful girl, who knows the path,” in Slavic and African languages.

These calves will start spending more time on the savanna in the coming days, so be on the lookout to see if you can spot them on your next safari adventure!

The animals on Kilimanjaro Safaris make it so no two experiences are exactly alike, and it is always an exciting day to see new animals out on the savannah. This is the latest baby animal news to come out of Disney’s Animal Kingdom following the birth of a white rhino.