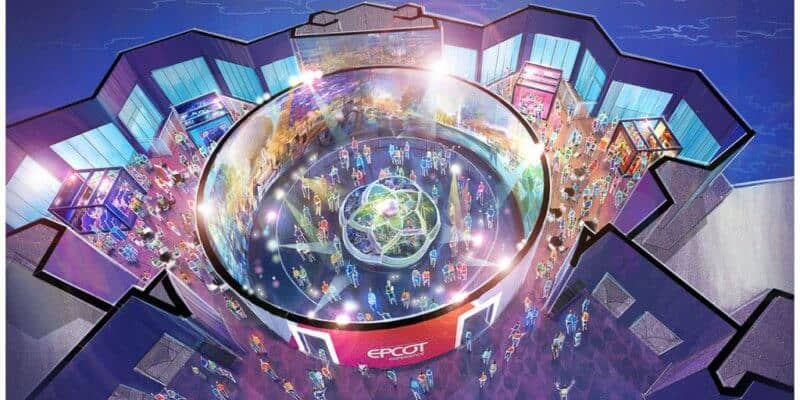 Back in summer 2019 at the D23 Expo in Anaheim, Disney Parks, Experiences and Products shared several plans for a historic transformation of EPCOT, the second theme park at Walt Disney World Resort. But, due to the ongoing pandemic, some of those plans have been put on hold indefinitely. And it appears as though, for now, one of those projects is the PLAY! pavilion.

All the Details on EPCOT Reimagined: What’s Happening, What’s Not, and What We Know So Far

It was announced last summer that EPCOT’s Future World would be transformed into three distinct neighborhoods: World Nature, World Celebration, and World Discovery. World Discovery — where the current Mission: SPACE attraction and the future Space 220 restaurant are located — was to be the home of the all-new PLAY! pavilion:

The PLAY! pavilion will open in time for the 50th anniversary of Walt Disney World. In this digital metropolis, you’ll discover an interactive city bursting with games, activities and experiences that connect you with friends, family and beloved Disney characters – both real and virtual – like never before. As part of this new pavilion, you’ll have the chance to help legendary fashion icon Edna Mode on her quest to rid the world of uninspired style, or make a splash competing in a water-balloon fight hosted by Huey, Dewey, Louie and Webby.

Only now, it appears as though there aren’t plans for this pavilion to be completed anytime soon. Or, at least, it doesn’t seem that it will be completed as part of the current iteration of EPCOT’s transformation.

On the official Walt Disney World News website — where Disney Parks shares press releases for Walt Disney World Resort — the company has continued to edit past press releases to keep them more up-to-date with the plans still in store for the parks and resorts. We saw this happen when Reflections, a Disney Lakeside Lodge was removed from a previous announcement after D23. Now, something similar is happening with the PLAY! pavilion.

Disney has updated a 2019 press release for the historic transformation of EPCOT to reflect the most up-to-date plans for the theme park. For example, a few months ago it was announced that the Mary Poppins attraction in the U.K. pavilion and the reimagining of Spaceship Earth were put on hold, and now the press release no longer shares information about those attractions. As of this week, the press release also does not share any information about the PLAY! pavilion, leading many to believe that, for now, this project is on hold.

The most up-to-date description of World Discovery states the following:

Note that although the PLAY! pavilion announcement was removed from one release, it still is listed in this one. Additionally, we have continued to report on EPCOT construction, including the PLAY! pavilion. So it’s still unclear at this time what exactly is going on with this area of the park. Is construction continuing, but it won’t be ready for the WDW 50th? Or is this project postponed indefinitely?

Disney has not issued an official announcement about the PLAY! pavilion no longer coming to EPCOT, so until then we are keeping our hopes up. Still, EPCOT was planned to have a massive overhaul, as it was announced even before we got all the details at D23. With new attractions, dining, and other offerings still in the world for this theme park — and with how much Disney is still hyping it up — we have no doubt that it will be amazing.

For the latest information on what’s coming to EPCOT, read our article here.

What do you think of Disney’s plans for EPCOT? Let us know in the comments.