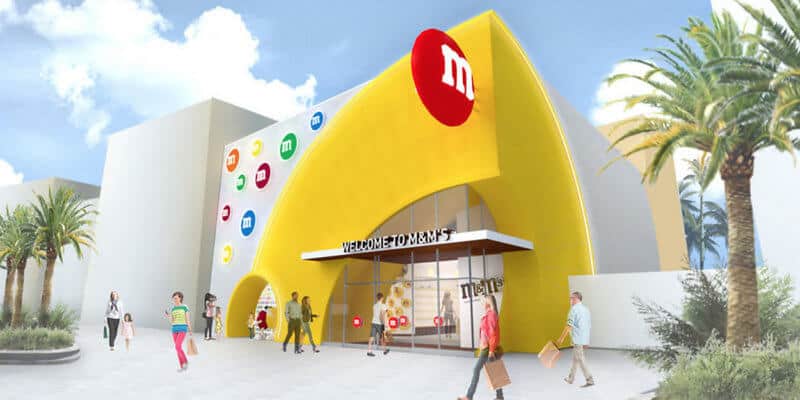 If you’re looking for some fun that “melts in your mouth, not in your hands,” you’ve got to make plans to visit Disney Springs at Walt Disney World later this year when the brand-new M&M’s store opens!

The chocolately new store, which is being described by some as an “experimental store,” was officially announced in December of last year.

As of right now, there has been no definite opening date disclosed, but we are excited that the opening is slated for sometime later on this year. Mars Retail Group did, however, release concept art just yesterday that shows what the new store will look like on the outside. The artist’s endering of the new retail spot depicts bold colors and several M&M’s candies on the outside facing of the building. There is also a “Welcome to M&M’s” message above the entrance to the new store. (Yellow is such an “M&M’s color,” don’t you think?)

The new state-of-the-art M&M’s retail location will boast a Wall of Chocolate and will offer guests a plethora of interactive experiences inside the store. Additionally, there will also be opportunities to make memories with characters at the new store, and visitors will be able to customize and create their very own M&M’s.

It looks like 2020 will be a sweet year for Disney Springs!

What’s your favorite retail hotspot at Disney Springs? How well do you think a store like the M&M’s shop will fare at Disney’s dining, shopping and entertainment district? Make your predictions in the comments section below.