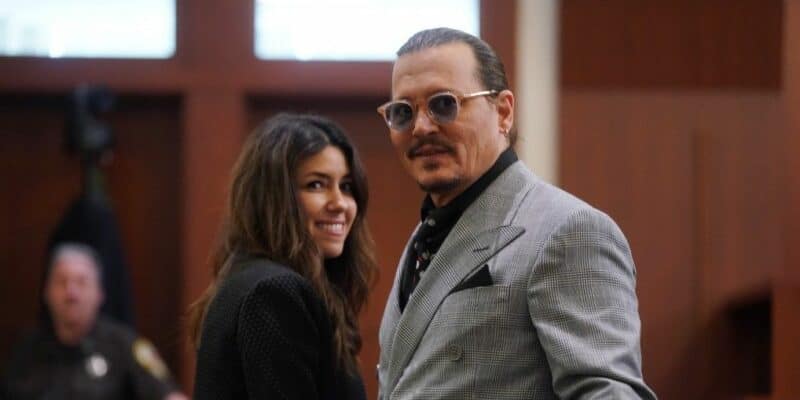 Just when things were looking positive for Johnny Depp — who was recently featured in a Dior Sauvage primetime commercial spot after a massive win in his highly-publicized lawsuit against ex-wife Amber Heard — his upward trajectory might have hit a slight snag.

Depp’s star attorney, Camille Vasquez — to whom he was at one time rumored to be romantically linked — has gone viral thanks to newly released footage of her referring to the Sleepy Hollow star as an “abuser.”

Per a Newsweek report, Vasquez has fought back against the video, saying she misspoke and intended to say “abuse victim.” The outlet noted that the footage emerged after 6,000 pages of court documents were released and subsequently made their way to the internet:

In one tweet, Vasquez delivers her closing arguments to the jury in court on May 27, 2022.

In her closing statement, the lawyer said: “Amber never thought she would have to face her abuser.”

It appears that Vasquez mistakenly used the word abuser when referring to Depp. A clip posted this week with the caption “Johnny’s girlboss lawyer has a Freudian slip and calls him an abuser” clocked up almost 300,000 views on Twitter.

You can watch Vasquez’s slip of the tongue below:

Depp’s camp has not weighed in on the situation.

On June 1, 2022, a verdict was reached in the Johnny Depp vs. Amber Heard defamation lawsuit, and Depp’s many supporters couldn’t be happier with the outcome — the seven-person jury spoke, and Depp won.

The high-profile $50 million civil lawsuit in Fairfax, Virginia, saw a number of explosive accusations, from leaked text messages in which Depp and a close friend referred to Heard’s “rotting corpse” to psychological evaluations that allegedly exposed Heard’s multiple mental disorders. Public opinion is divided, with some believing Heard’s allegations of domestic violence and others fully supporting Depp’s continued — and vehement — denial of the claims against him.

The Edward Scissorhands star received a great deal of support from his legion of fans throughout his legal battle, and many cannot wait to see him revive his career both onstage as a guitarist and in the movies.

British Judge Andrew Nicol presided over the original proceedings, and Depp later lost his right to appeal the original ruling in the United Kingdom. The Jack Sparrow actor, for his part, has denied the domestic violence allegations, with even his ex-partners, Vanessa Paradis and Winona Ryder, speaking out in his defense at various times.

Depp has been fired from his two most high-profile parts — his iconic role as Captain Jack Sparrow in Disney’s Pirates franchise and as Gellert Grindelwald in Warner Bros. Fantastic Beasts series — as a result of the situation.

Heard’s legal team has officially filed the actress’s first appeal in a bid to overturn the June verdict.

What do you think about Camille Vasquez’s courtroom slip-up?