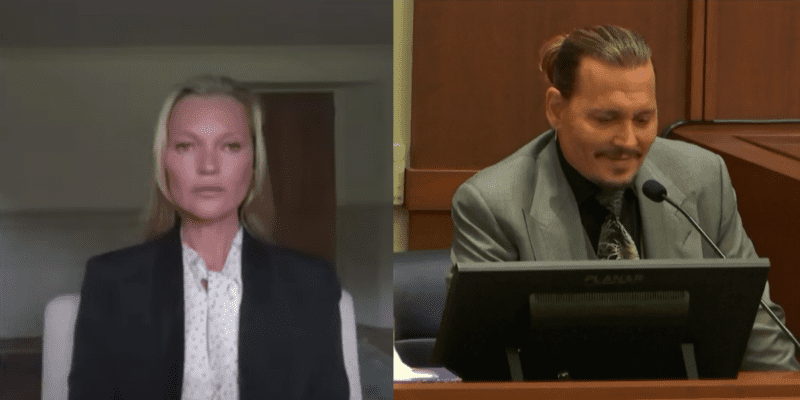 Supermodel Kate Moss took the stand in Johnny Depp’s $50 million lawsuit against his ex-wife, Amber Heard, on Tuesday. Depp is suing Heard after she wrote an Op-Ed in The Washington Post describing herself as a victim of domestic abuse.

Heard rested her $100 million countersuit against Depp on Tuesday, in which she alleges Depp’s former attorney permanently damaged her career by publicly claiming her abuse allegations were a hoax.

Depp and Moss dated from 1994 to 1998. Moss was called as a rebuttal witness to discredit Heard’s earlier testimony. The Aquaman (2018) star testified that she heard a rumor that Depp had pushed Moss down the stairs, leading her to take action when Depp allegedly engaged in an altercation with her sister, Whitney Henriquez, near a set of stairs.

During Moss’s brief testimony, she claimed to have fallen down the stairs after a rainstorm during a trip to Jamaica with Depp. From CNN:

“We were leaving the room and Johnny left the room before I did and there had been a rainstorm and as I left the room I slipped down the stairs and I hurt my back. I screamed because I didn’t know what happened to me and I was in pain and he came running back to help me and carried me to my room and got me medical attention.”

Depp’s attorney asked Moss if the Pirates of the Caribbean (2003) star had ever pushed her down any stairs during their four-year romantic relationship.

“No. He never pushed me, kicked me, or threw me down any stairs,” Moss said under oath.

Mr. Depp himself took the stand later on Wednesday, agreeing with Moss’s testimony. “Exactly what happened is what she said happened,” Depp said.

“It was raining very heavily that day that Kate slipped, and I recalled the story to [Ms. Heard],” Depp said. “Ms. Heard took the story and turned it into a very ugly incident all in her mind. There was never a moment where I pushed Kate down any set of stairs, yet she’s spewed this three times.”

Depp has denied all allegations of domestic partner’s with Heard, Moss, with ex-partners Winona Ryder and Vanessa Paradis speaking out in his defense over the years.

Johnny Depp will continue to testify today, with closing statements scheduled to begin Friday. Inside the Magic will update on any critical developments in the trial.

Are you keeping up with the Johnny Depp trial against Amber Heard? Let us know in the comments.