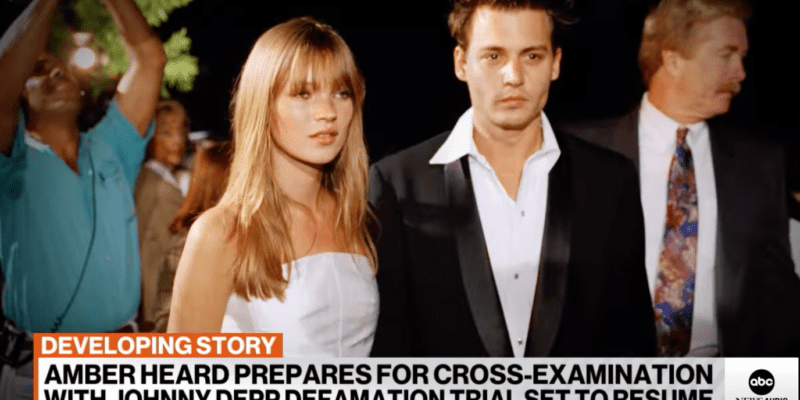 The ongoing Johnny Depp vs Amber Heard defamation trial, taking place in a Fairfax, Virginia courtroom, is coming down to the wire. We are now on the sixth week of the trial and have seen many witnesses taking the stand, including Johnny Depp and Amber Heard themselves.

While Ms. Heard was on the stand, she brought up the alleged Kate Moss and staircase incident, which opened the door to allow Mr. Depp’s team to call Kate Moss to the stand.

The supermodel dated Mr. Depp between 1994 and 1997 and is now allowed to testify to help Mr. Depp’s case because Ms. Heard mentioned her name while on the stand during her testimony earlier this month.

During the Aquaman actress’s testimony, Heard brought up a 2015 altercation between her younger sister, Whiitney Henriquez, and Mr. Depp. Heard explained that her sister was standing at the top of the stairs when Depp approached and allegedly swung at her, which she then proceeded to talk about the rumored incident that Johnny Depp once pushed Kate Moss down a flight of stairs.

Heard said while on the stand:

“I don’t hesitate. I just instantly think of Kate Moss and the stairs, and I swung at him. In all my relationships to date, I hadn’t [delivered] a blow. For the first time, I hit him square in the face.”

Related: Woman Yells To Johnny Depp In Courtroom, Claims He Is the Father of Her Baby

Because Heard referenced Moss on the stand, Depp can now call the supermodel to testify, which can help his case tremendously. In fact, when Heard mentioned Kate Moss’s name, Depp’s attorney Benjamin Chew looked back at Depp’s other attorney, Camille Vasquez, and was extremely happy.

Legal experts have said that Heard’s reference to Kate Moss allowed Depp’s team to address the rumors of the staircase incident.

Kate Moss will testify via video as a rebuttal witness on Wednesday, May 25 a Depp source confirmed to EW.

Comments Off on Kate Moss to Testify, Could Help Johnny Depp Win Case Against Amber Heard