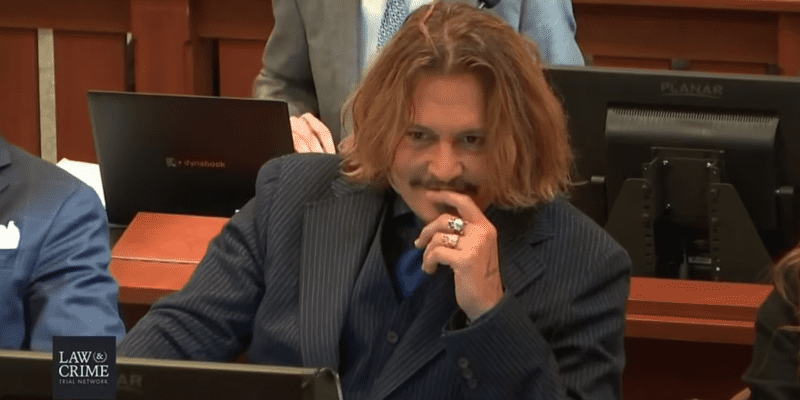 While the courtroom took their morning recess earlier today, a woman in the courtroom yelled to Johnny Depp, claiming he was the father of her baby.

Johnny Depp is suing his ex-wife, Amber Heard, 35, (Aquaman (2018), The Rum Diary (2011), Drive Angry Piper (2011), and more) for defamation after she wrote an op-ed for The Washington Post, where she referred to herself as a “public figure representing domestic abuse.”

After losing to The Sun in a libel lawsuit case in November 2021, Depp has gone back to court for a defamation case, taking place in Virginia, claiming that Heard isn’t telling the truth and has ruined his career.

The trial continued today in the Fairfax, Virginia courtroom where an incident took place during the morning break.

According to Law & Crime Network host Angenette Levy, when the court took their morning recess, a woman in the courtroom gallery reportedly yelled, “Johnny I love you! Our souls are connected!”

Levy continued to report that Depp turned and waved to the woman, where she then proceeded to lift up her baby and shouted, “This baby is yours!”

The woman was quickly escorted from the courtroom.

The @LawCrimeNetwork's Angenette Levy reports outside the courtroom that a woman told #JohnnyDepp he is the father of her child on Monday. pic.twitter.com/rVYHOHa0Qn

Later on, during the lunch break, Law & Crime Network host Jesse Weber confirmed that Depp was not the father of the baby.

It is unclear what happened to the woman at this time, but Inside the Magic will update you as we get information.

The Depp vs Heard trial continues today in Fairfax, Virginia. Reports are coming in that Johnny Depp will be called by the defense as a witness.

Comments Off on Woman Yells To Johnny Depp In Courtroom, Claims He Is the Father of Her Baby