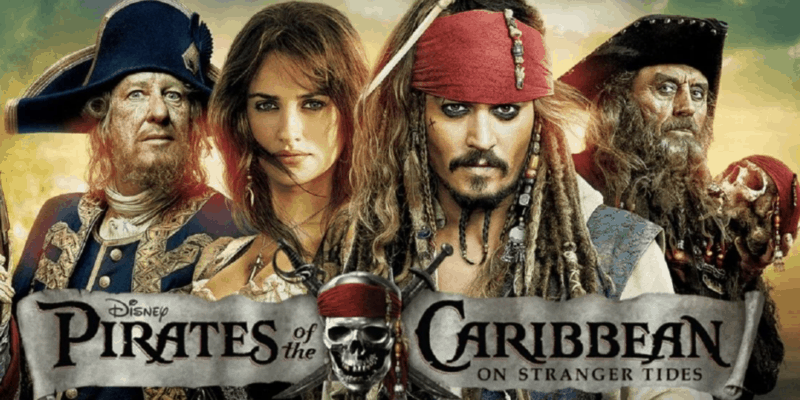 One of the (arguably) most popular franchises to have ever come from Disney is Pirates of the Caribbean.

The popular attraction was the first of its kind to turn into a movie, with the first Haunted Mansion (2003)  film trailing along a few months later doing the same. Now, we are seeing great success with attractions tuned into movies with the premiere of Jungle Cruise, as opposed to only making rides based on movies.

When Pirates of the Caribbean: The Curse of the Black Pearl was first being conceptualized, Disney anticipated failure and was not even sure if the movie would make it to theaters. Robert De Niro even turned down the role of Jack Sparrow in fear that the movie would tank. Of course, we know that didn’t happen — quite the opposite, actually.

Up until now, five films have been created for the franchise. Disney+ subscribers have only been able to watch four — but that is about to change. It has now been reported that Pirates of the Caribbean: On Stranger Tides, the fourth film in the franchise, is coming to Disney+ this September for all United States Disney+ subscribers. This will finally complete the Pirates of the Caribbean collection on the streaming service.

The official synopsis of the film reads:

“Pirates of the Caribbean: On Stranger Tides captures the fun, adventure and humor that ignited the hit franchise -this time in Disney Digital 3D(TM). In this action-packed tale of truth, betrayal, youth and demise, Captain Jack Sparrow crosses paths with a woman from his past (Penelope Cruz), and he’s not sure if it’s love-or if she’s a ruthless con artist who’s using him to find the fabled Fountain of Youth. When she forces him aboard the Queen Anne’s Revenge, the ship of the formidable pirate Blackbeard (Ian McShane), Jack finds himself on an unexpected adventure in which he doesn’t know who to fear more: Blackbeard or the woman from his past.”

Pirates of the Caribbean 6 is still slated to continue, even though Disney and Jack Sparrow actor Johnny Depp are currently on the outs. Johnny Depp has been “boycotted”, in his own words, by Hollywood after alleged claims rose from his ex-wife Amber Heard. The two are currently in an ongoing legal battle. The final verdict will not be delivered until next year, but the negative press has heavily affected Johnny Depp as both Disney and Warner Bros. cut ties with him during the height of the scandal.

In Pirates of the Caribbean 6, viewers can expect a very different film as the movie will be helmed by Margot Robbie and feature an all-new female-centric cast. At the moment, there is little information on the film aside from Robbie wanting her character to be a part of the LGBTQ+ community.

You can catch Pirates of the Caribbean: On Stranger Tides on Disney+ as of September 10.

Do you want to see more Pirates of the Caribbean content from Disney?