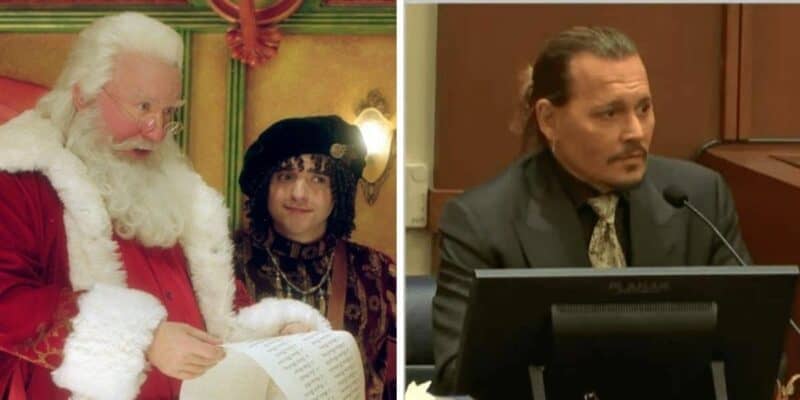 Many celebrities and actors are speaking out regarding the ongoing Johnny Depp vs Amber Heard defamation trial, which is taking place in a Fairfax, Virginia courtroom.

Now, The Santa Claus star, David Krumholtz, is speaking out and had some brutal things to say about Johnny Depp.

Johnny Depp is suing his ex-wife, Amber Heard, 35, (Aquaman (2018), The Rum Diary (2011), Drive Angry Piper (2011), and more) for defamation after she wrote an op-ed for The Washington Post, where she referred to herself as a “public figure representing domestic abuse.”

After losing to The Sun in a libel lawsuit case in November 2021, Depp has gone back to court for a defamation case, taking place in Virginia, claiming that Heard isn’t telling the truth and has ruined his career.

Now, actor David Krumholtz, who is known for his role as Bernard in The Santa Clause, is speaking out regarding the case.

Krumholtz previously worked alongside Ms. Heard on the 2011 series The Playboy Club. He is now weighing in on the trial, giving his opinion on the incident at hand.

The actor posted to his Instagram Stories, according to reports, saying that he believes Heard is an abuse victim as Depp has known drug and alcohol use, which have contributed to Depp’s alleged behavior.

Krumholtz also stated that he believes Mr. Depp is suing Ms. Heard as a way to avoid owning up to his own “addiction issues.”

“Amber Heard is a victim of abuse by Johnny Depp. Don’t ya just love his work? Isn’t he handsome? Heard he’s a sweetheart! Captain Jack Sparrow!!! Drugs and alcohol turn men into monsters… I believe Amber Heard… She is not innocent. But she IS a victim. Johnny Depp’s smugness during the trial is sickening… I worked with Amber Heard. She is not psychotic. She is brilliant and strong and got caught up in bulls***. She made a mistake. Why is Johnny suing her? Because he has not owned up to his raging addiction issues.”

However, Krumholtz disagrees with this and went on to say that Depp did not lose his role as Captain Jack Sparrow in Pirates of the Caribbean 6 because of his own drug and alcohol abuse and not because of Heard’s domestic violence accusations.

“The reason Johnny Depp lost career opportunities is because he was a total mess. Disney etc… doesn’t care what Amber accused him of. He ruined his public image by being a severe drug abuser and drunk.”

The Depp vs Heard trial continues today in Fairfax, Virginia. Reports are coming in that Johnny Depp will be called by the defense as a witness on Monday.