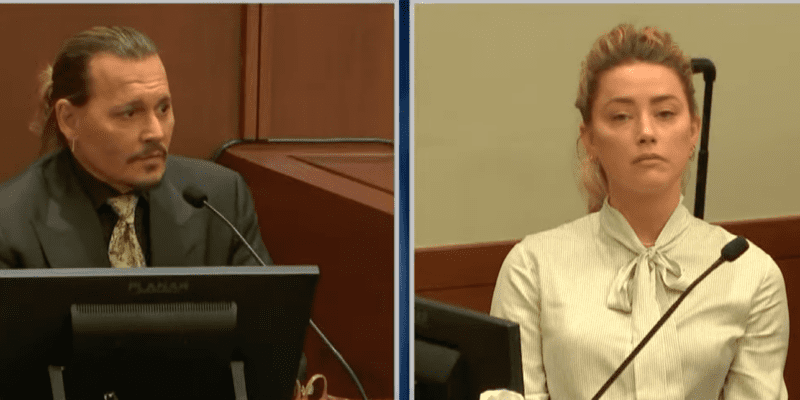 Now, Mr. Depp has appeared in court alongside ex-wife, Heard, as he is suing the Aquaman actress for defamation. Ms. Heard is countersuing Mr. Depp, claiming that he “defamed her when his former lawyer released statements saying her allegations of abuse were a hoax.”

Depp has been under testimony for the last four days in court, which is taking place in Fairfax, Virginia, where he has accused Ms. Heard of years of abuse. During his last day under testimony, as Depp’s attorney conducted the redirect examination, Depp once again told the jury that he was the victim of domestic violence.

Depp also restated that Heard’s claims in her Op-Ed are “completely untrue”. “The only person I’ve abused in my life is myself,” Depp said referencing his struggle with substance abuse, which began when he was just 11 years old. He described his drug use as “self-medication” after living through a difficult childhood, as well as through his marriage with Heard when he needed to seek “numbing”.

Depp and his attorney also addressed those disturbing text messages between Depp and WandaVision star Paul Bettany, saying his writing style is “abstract humor” and it is a way he can “express myself”.

“The text that is about burning Ms. Heard, it’s directly from Monty Python in the sketch about burning witches and then drowning the witches. This is a film we all watched… it’s just irreverent and abstract humor, that’s what we were referring to in those texts,” Depp said, referring the text he sent to Bettany.

“Ms. Heard despised Mr. Bettany because, mainly, we had become such close friends and for her, he was a threat. He would take me away from her,” Depp continued to explain. “If Paul Bettany was getting the attention from me, that was a showstopper. It would cause all kinds of unpleasantries.”

Also during the redirect, Depp explained that he learned he was going to be recast as Jack Sparrow from a news article quoting a Disney executive just a couple of days after Heard’s Op-Ed was published in The Washington Post. Depp testified:

Are you watching the Johnny Depp versus Amber Heard trial? What do you think so far? Let us know in the comments below.

Comments Off on Depp Admits In Court: “The Only Person I’ve Abused In My Life Is Myself’