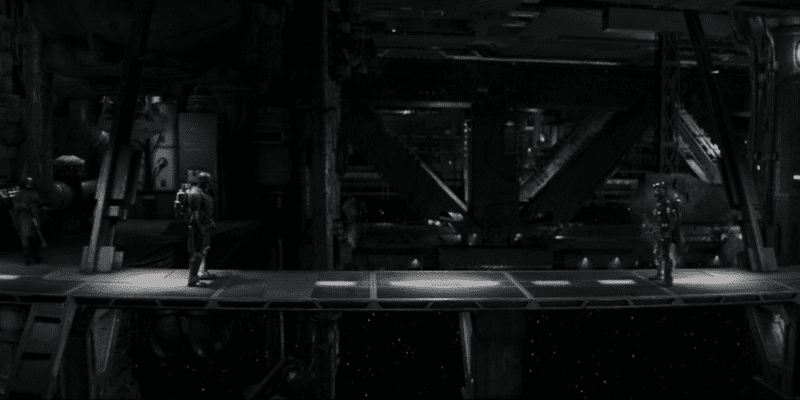 **SPOILERS FOR THE BOOK OF BOBA FETT SEASON 1, EPISODE 5 (“Chapter 5: The Return of the Mandalorian”) BELOW**

Bryce Dallas Howard’s fifth installment of the seven-episode first season of The Book of Boba Fett delivered — and then some. Fans were thrilled with the show, which felt significantly more like The Book of Din Djarin or, perhaps, the premiere of The Mandalorian Season 3.

Creator Jon Favreau previously billed The Book of Boba Fett as “The Mandalorian Season 2.5″ and Episode 5 proved why — there was nary a trace of Temuera Morrison’s Fett in the entire episode, but Star Wars fans saw Pedro Pascal’s Din Djarin in nearly every scene.

The bounty hunter even referenced Grogu (AKA “Baby Yoda”) — and had The Armorer (Emily Swallow) forge a special gift for the tiny foundling who is currently in the capable hands of Jedi Master Luke Skywalker (Mark Hamill) — offering up fan service in the very best way, as only Favreau and Dave Filoni can do.

One of the most critical moments of Howard’s episode came when Paz Vizsla (Tait Fletcher/voiced by Jon Favreau) presented the Darksaber to The Armorer on Djarin’s behalf. Ultimately, Vizsla challenges Djarin to a duel to win back the ancient Mandalorian weapon, which was crafted by his ancestor Tarre Vizsla, the first Mandalorian Jedi Knight.

As it turns out, Star Wars fans actually called this scene over two years ago. Redditor u/andwebar wrote:

Paz Vizsla is the rightful owner of the Darksaber

We know that darksaber doesn’t really give you a claim as leader of whole Mandalore, but only of House Vizsla and Death Watch, and it was passed along by ancestors of Pre Vizsla.
So Heavy Mandalorian Paz Vizsla should have all claim to the weapon, not Kryze [Katee Sackhoff’s Bo-Katan Kryze], not Djarin, not any other house

Paz Vizsla is the rightful owner of the Darksaber from starwarsspeculation

u/JLampy12 noted that Vizsla couldn’t lay rightful claim to the weapon without winning it fairly in battle — as Djarin did from Moff Gideon (Giancarlo Esposito) in The Mandalorian Season 2 finale episode (“Chapter 16: The Rescue”), which is, of course, exactly what Vizsla ultimately tried to do:

u/CYNIC_Torgon pointed out several key facts about the Darksaber that are seemingly playing out in the “Mando-Verse,” particularly now that Djarin has defeated Vizsla:

Rebels would seem to imply the Darksaber is a symbol to all mandalorians. Fenn Rau wasn’t exactly a fan of Death Watch or the Vizslas, but he held a certain level of respect for The Darksaber, even saying Sabine [Tiya Sircar’s Sabine Wren] could rally people to the rebellion with it. And later we see Bo Katan take up the Darksaber as leader and several clans bowed to her.

Not only that, but Pre Vizsla says that “Only The Strongest Shall Rule”, and I think that The Mandalorian will show us that Din Djarin is The Strongest, maybe not in physical strength, but in spirit.

It is worth noting that Djarin honestly answered The Armorer when she asked, “Have you ever removed your helmet?” He is told, “You are a Mandalorian no more.”

When the fan-favorite character asks how he can atone for his actions — he broke “the Way of the Mandalore” when he allowed Grogu to touch his face and, possibly, when he aided Migs Mayfeld (Bill Burr) at the Imperial outpost in “Chapter 15: The Believer” — he is told that the only option is to seek the “living waters” in the mines under Mandalore. The mines, however, have been destroyed, posing a serious problem.

Presumably, The Mandalorian Season 3, which is currently in production, will continue answering the questions surrounding Djarin’s status as a Mandalorian warrior.

For now, we can expect to see the bounty hunter team up with Fett and Ming-Na Wen’s Fennec Shand for an epic penultimate episode next week.

What do you think about fans predicting Din Djarin and Paz Vizsla’s battle years ago?