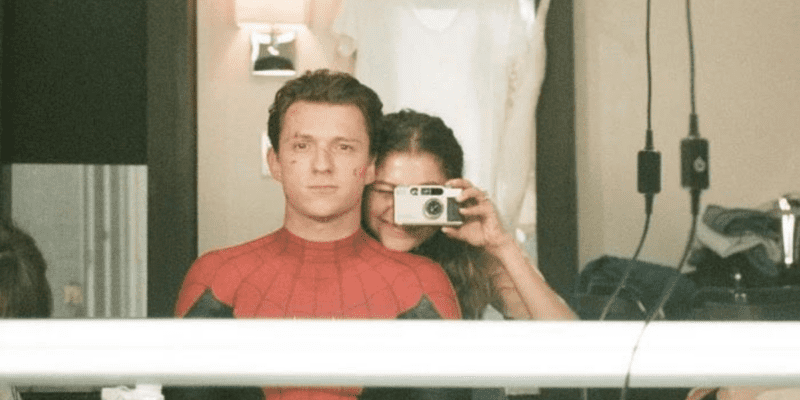 History was made when Sony producer Amy Pascal officially announced that Marvel Studios are developing a new Spider-Man trilogy with Tom Holland, extending the fan-favorite actor’s pre-existing Avenger contract. Tom Holland might not know that the world is in on the secret despite the news going public.

The official press tour for Spider-Man: No Way Home (2021) kicked off Monday at the 2021 Ballon d’Or, an annual ceremony presented by France Football to recognize the greatest soccer players in the world.

Monday also marks Sony and Marvel’s official announcement that three more Tom Holland Spider-Man films are in the works, giving Holland a record-breaking six solo Marvel movies. However, the actor is on his A-game by recently laughing off a question from a French interviewer asking if Holland signed on for three more films:

Staying on his toes, Tom Holland looks over to No Way Home co-star Zendaya (MJ Williams), and with a smile, says, “Next question.”

Earlier today, however, Sony producer announced that Marvel Studios are developing a new Spider-Man trilogy with Tom Holland’s superhero. Tom Holland could still be in the dark about the public knowing, hence him dodging the question.

Given that Holland has voiced his wanting to stay Spider-Man, every Marvel fan can bet that he’ll be thrilled to officially share the news on social media soon.

With Spider-Man: No Way Home expanding the Marvel Collection within the Marvel Cinematic Universe, it’s clear that Tom Holland is needed to lead the next era of Marvel heroes — iconic characters ready to change the Marvel Universe forever.

One of the best aspects of Tom Holland’s Spider-Man universe is the relationship between Peter Parker and Michelle Jones (“MJ”). What started as puppy love in Spider-Man: Homecoming (2017) turned into a more serious relationship in Far From Home.

With the college years of Peter Parker quickly coming, Marvel could introduce iconic characters Black Cat, Rhino, Kraven the Hunter, Venom, and more into the Marvel Cinematic Universe, with heroes Matt Murdock/Daredevil (Charlie Cox) and the Punisher (who’s technically an antihero) joining the fight in Marvel’s New York. On top of that, every Marvel fan can see the relationship between MJ and Peter Parker grow.

Tom Holland and crew will have to stay on their toes with the Spider-Man: No Way Home press tour in full swing, with many rumors suggesting that previous “Spider-Men” Tobey Maguire and Andrew Garfield are putting back on their Spidey suits to help defeat the Sinister Six.

No Way Home is just the beginning of Tom Holland’s Marvel tenure.

Do you want a Spider-Man crossover? Let us know in the comments below!