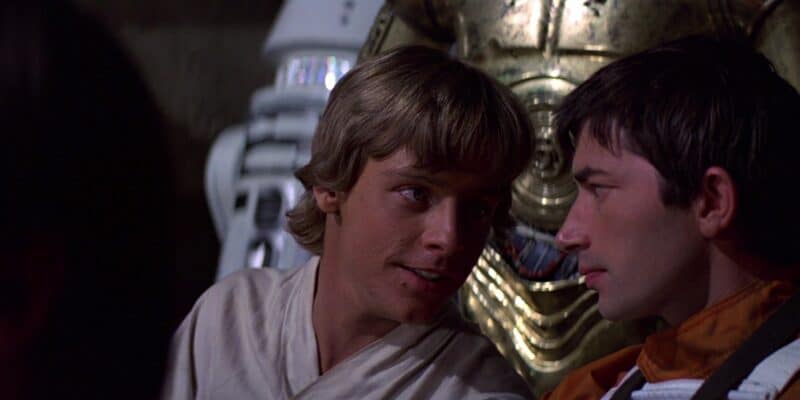 When the Star Wars sequel trilogy began with JJ Abrams’s Star Wars: Episode VII – The Force Awakens (2015), many fans were not thrilled with the direction in which their beloved franchise was heading.

Many fans were unhappy not only with how Jedi Knight Luke Skywalker (Mark Hamill) and Han Solo (Harrison Ford) met their demises, but with the story arcs set forth for the sequels’ heroes, Rey (Daisy Ridley), Poe Dameron (Oscar Isaac), and ex-stormtrooper Finn (John Boyega).

Boyega, in particular, has been vocal about his dissatisfaction with the Star Wars franchise, even sitting down with Lucasfilm President Kathleen Kennedy for an “honest conversation” about his experience.

Now, one original trilogy actor, Denis Lawson (Wedge Antilles) has spoken out about how he was supposed to have a much larger role in the Star Wars sequels but was unable to do so due to a scheduling conflict:

“[JJ] Abrams got in touch with me directly, which is very unusual, they don’t do that. They wanted me to do five days on the movie, but I was in a play and then directing a play, so I was just out of it, and he said I don’t think we can make this work, and I said, ‘Come on, we can do this!’ So, instead of five days I just managed one, but it was lovely to get back on the set. It was nice to step back on, it really was.”

Lawson appeared in the now-iconic “fleet scene” near the end of Rise of Skywalker, in which Star Wars fans were treated to numerous cameos — including an emotional moment in which Billy Dee Williams (Lando Calrissian) piloted the Millennium Falcon alongside Chewbacca (Joonas Suotamo) in slain Han Solo’s stead.

As on article about Lawson’s recent comments noted:

…it sounds as though Lawson wasn’t made entirely aware of whatever plans Abrams had for Wedge in the film, as the point of contention was solely based on availability, but we likely could have seen the pilot earn more screen time in the aerial battle, or potentially could have seen Wedge spend more time with the Resistance celebrating their victory.

While seeing more of Antilles in the Skywalker Saga conclusion may not have changed fans’ overall opinion of the sequel trilogy, it certainly would have appeased some viewers.

There had, in fact, been rumors that Lawson would return in some fashion in Patty Jenkins’s Star Wars: Rogue Squadron. Now that the film has been officially removed from Lucasfilm’s production schedule, however, it is unknown when the character could return to the Star Wars universe.

A talented young rebel pilot from Corellia, Wedge Antilles survived the attack on the first Death Star to become a respected veteran of Rogue Squadron. He piloted a snowspeeder in the defense of Echo Base on Hoth, and led Red Squadron in the rebel attack on the second Death Star above Endor.

Would you like to see Wedge Antilles back in the Star Wars franchise?