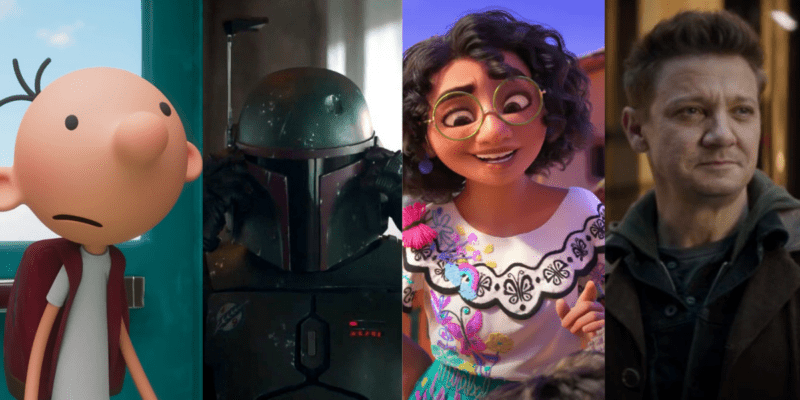 What’s coming to Disney+ this December? The fastest-growing streaming service on the market is gearing up to end 2021 with a bang — releasing original movies and series from Disney Animation Studios, the Marvel Cinematic Universe, Star Wars, and more! On the heels of the thrilling first trailer for Star Wars: The Book of Boba Fett, fans are looking forward to returning to the galaxy of The Mandalorian with the adventures of the fan-favorite bounty hunter, Boba Fett (Temuera Morrison).

In December 2021, Disney will release hotly anticipated new content like the Disney Animation Studios feature film Encanto, a brand new Diary of a Wimpy Kid movie, and episodes of Hawkeye’s newest MCU series. Read on to learn when you can expect to see all the latest releases on Disney+ this holiday season.

Disney+ celebrates its 2nd anniversary with the inaugural Disney+ Day on November 12 by rolling out Marvel’s Shang-Chi and the Legend of the Ten Rings (2021) as part of a killer line-up of content. Marvel fans are also circling another date on their calendars — November 24. That’s the day Marvel Studios will drop the 2-episode premiere of Hawkeye starring Jeremy Renner as the titular Avenger. The 6-part series will air the rest of its episodes in the month of December — perfect timing for the “Christmas in New York” setting of the series.

On December 1, 8, 15, and 22, Disney+ audiences can catch Clint Barton and his bow-and-arrow hero protege Kate Bishop (Hailee Steinfeld) as they team up to take on enemies Barton made under the mantle of Ronin, as depicted in Avengers: Endgame (2019). The series has a stacked cast, including Alaqua Cox as vigilante Echo, Florence Pugh as Yelena Belova, Vera Farmiga as Elanor Bishop, Linda Cardellini as Laura Barton, Fra Free as The Clown, and Tony Dalton as Jack Duquesne.

In 2019, Disney announced “reimaginings” of three family-favorite properties — Home Alone, Night at the Museum, and Diary of Wimpy Kid. With the Home Alone (2021) reboot set to premiere on Disney+ Day — November 12 — the next reimagining to be released is the animated Diary of a Wimpy Kid (2021). Disney’s official synopsis describes the plot:

“The first book in Jeff Kinney’s worldwide bestselling series comes to Disney+ in the all-new animated adventure “Diary of a Wimpy Kid.” Greg Heffley is a scrawny but ambitious kid with an active imagination and big plans to be rich and famous – he just has to survive middle school first. To make matters worse, Greg’s lovable best friend Rowley seems to coast through life and succeed at everything without even trying! As details of his hilarious – and often disastrous – attempts to fit in fill the pages of his journal, Greg learns to appreciate true friends and the satisfaction that comes from standing up for what is right.

Related: ‘Jingle All The Way’ Fan-Favorite Christmas Film to Be Added to Disney+

Welcome to Earth hosted by Will Smith – Wednesday, December 8

“It might seem humans have mapped every inch of our planet’s surface, but look closer and you’ll discover that there is still so much more to uncover — the age of exploration is far from over! WELCOME TO EARTH, a Disney+ original series from National Geographic, follows two-time Academy Award® nominee Will Smith on an extraordinary, once-in-a-lifetime adventure around the world to explore Earth’s greatest wonders and reveal its most hidden secrets. Throughout the six-part limited series produced by visionary Academy Award-nominated filmmaker Darren Aronofsky, Protozoa Pictures, Jane Root’s Nutopia and Westbrook Studios, Will is guided by elite explorers on an awe-inspiring journey, getting up close and personal with some of the most thrilling spectacles on the planet — from volcanoes that roar in silence to deserts that move beyond our perception to animal swarms with minds of their own. Combining breathtaking cinematography with Will’s boundless curiosity and enthusiasm, the blockbuster series is an exciting, multisensory ride through Earth’s most mind-bending portals.”

“Ro isn’t handling her parents’ divorce well because she wants her life back the way it was—her parents back together, her dad’s new girlfriend and son out of the picture, and their family traditions to remain the same. After a disappointing celebration with her family, including her sister Gabriela “Gabby,” Abuela Sofia and Abuelo Hector, she makes a wish to a neighborhood Santa for a “do-over” and unexpectedly finds herself reliving Christmas day over and over … and over again. Now, in order to break the strange magical loop, Ro must learn to appreciate her loving family as it is, as well as the true meaning of Christmas.”

The official synopsis of the film from 20th Century Animation:

“20th Century Studios and Locksmith Animation’s “Ron’s Gone Wrong” is the story of Barney, a socially awkward middle-schooler and Ron, his new walking, talking, digitally-connected device, which is supposed to be his “Best Friend out of the Box.” Ron’s hilarious malfunctions, set against the backdrop of the social media age, launch them into an action-packed journey in which boy and robot come to terms with the wonderful messiness of true friendship. “Ron’s Gone Wrong” features the voices of Zach Galifianakis (“A Wrinkle in Time”), Jack Dylan Grazer (“Shazam!”), Olivia Colman (“The Crown”), Ed Helms (“The Office”), Justice Smith (“Jurassic World: Fallen Kingdom”), Rob Delaney (“Deadpool 2“), Kylie Cantrall (“Gabby Duran and the Unsittables”), Ricardo Hurtado (“The Goldbergs”), Marcus Scribner (“Black-ish”), Thomas Barbusca (“Chad”).”

Emmy-award winning actress Keke Palmer will host this competition show featuring “…whimsical, larger-than-life, Disney-inspired works of art” made from food — anything from cheese to fruits and veggies! There are 11 episodes slated for Season 1 and they are set to be released all at once Wednesday, December 15 giving Disney+ subscribers a binge-worthy experience!

The official synopsis from D23:

“In each self-contained episode of Foodtastic, three teams of food artists will transform iconic characters into extravagant masterpieces that tell a story from Disney’s legendary IP. These food sculptures will be judged purely on their design, technical skills, and narrative, and not by taste. Unused food from each competition will be donated to local food banks.”

Featuring music from the visionary songwriter of Hamilton and Dinsey’s Moana, Encanto is the first musical from Disney Animation Studios since 2019’s smash Frozen II. While the most recent work from Disney Animation — Raya and the Last Dragon (2021) —  was released on Disney+, subscribers had to pay extra for Premier Access. Encanto will be available to all subscribers at no additional cost.

“Walt Disney Animation Studios’ “Encanto” tells the tale of an extraordinary family, the Madrigals, who live hidden in the mountains of Colombia, in a magical house, in a vibrant town, in a wondrous, charmed place called an Encanto. The magic of the Encanto has blessed every child in the family with a unique gift from super strength to the power to heal—every child except one, Mirabel (voice of Stephanie Beatriz). But when she discovers that the magic surrounding the Encanto is in danger, Mirabel decides that she, the only ordinary Madrigal, might just be her exceptional family’s last hope.

Following the instantly legendary Mandalorian Season 2 finale that featured a gripping appearance by Luke Skywalker (Mark Hamilton), fans also were hit with a quick post-credits stinger and title card for a Mandalorian spinoff, The Book of Boba Fett. Ever since then, Star Wars fans have been waiting for December 29.

“The Book of Boba Fett, a thrilling Star Wars adventure, finds legendary bounty hunter Boba Fett and mercenary Fennec Shand navigating the galaxy’s underworld when they return to the sands of Tatooine to stake their claim on the territory once ruled by Jabba the Hutt and his crime syndicate.

Mickey & Minnie Wish Upon a Christmas –

With Mickey & Minnie Wish Upon a Christmas, families can watch Mickey, Minnie, Goofy, Donald Duck, Daisy, and Pluto in an all-new Christmas adventure from Disney Television Animation. In the style of kid-favorites from Dinsey Junior — Mickey and the Roadster Racers and Mickey Mouse Fun House — the animated film is sure to be a favorite of your little ones this holiday season. While no official release date has been confirmed for Disney+, the movie will air on Disney Junior in early December and is expected to hit Disney+ sometime shortly after.

“After a series of mishaps, Mickey, Minnie and the gang are separated all over the world and must try to get back to Hot Dog Hills by Christmas Eve. A mysterious and jolly stranger shows up to tell them about The Wishing Star, which could be the secret to bringing everybody home in time to celebrate together. LaDuca and Seidenberg are executive producers. The movie is a production of Disney Television Animation.”

Which December release are you most excited to watch on Disney+? Let us know in the comments!