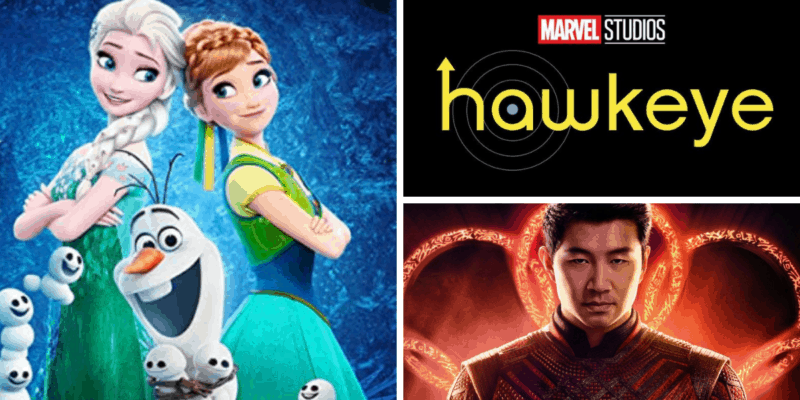 Spooky costumes, trick or treats, and delicious candy are just around the corner, but it only seems like yesterday that we were looking forward to the launches of Marvel’s What If? and Lucasfilm’s Star Wars: Visions on Disney+.

And now, Disney has revealed its November lineup of movies and television shows, ready to get us through the colder days and darker evenings. This month, we are in for an exciting milestone in Disney’s streaming adventure, with Disney+ celebrating its second anniversary with festivities online and across the parks on the inaugural Disney+ Day.

So let’s grab some candy corn and look at the bumper list of new entertainment coming to Disney+ this November, courtesy of What’s On Disney Plus.

With the support of her caring and comical ‘ohana (family) and friends, Lahela is determined to make the most of her teenage years and forge her own path. Guiding Lahela (and also complicating things) is her career-driven mother Dr. Clara Hannon who’s also her supervisor at the hospital, her doting father Benny who helps keep her connected to what matters most, her free-spirited older brother Kai, her gregarious younger brother Brian Patrick, her best friend Steph, her surfer crush Walter and her fellow hospital colleagues, Dr. Lee, Charles and Noelani.

The Search For Santa Paws

A holiday movie with Santa Claus and a cute dog – what more could we want to spread some cheer this holiday season?

Santa Claus and his faithful canine companion Santa Paws leave their chilly home at the North Pole on an important mission. They must try to persuade the heir of one of their greatest benefactors, toy store owner Mr Hucklebuckle, to continue with his grandfather’s good work.

The third film in the Air Buddies franchise, this 2009 family comedy sees three dogs venturing to space on a whirlwind galactic journey.

When their masters head off to see the launch of Vision One, an unmanned space shuttle, three dogs decide to follow them and join in the fun. When they decide to explore a high-security facility, they accidentally get stranded on the shuttle. The next thing they know, they are taking off on an intergalactic adventure.

This is an unusually busy release day to celebrate the second anniversary of Disney+. This fun event will be a global promotion mainly to get new subscribers and keep existing subscribers, but we can’t wait for these new releases!

Shang-Chi And The Legend Of The Ten Rings

Marvel’s latest movie, featuring martial-arts master Shang-Chi, follows the son of the famed MCU villain The Mandarin, who revolts against his father to fight evil. Expect beautifully choreographed fight sequences, a stellar cast, and the first stand-alone film featuring an Asian American superhero when this becomes free to all subscribers on Disney+.

Martial-arts master Shang-Chi confronts the past he thought he left behind when he’s drawn into the web of the mysterious Ten Rings organization.

The sixth installment in the Home Alone franchise follows Max Mercer, a 12-year-old boy who is grounded and left home alone for the holidays when a married couple arrives to steal a priceless heirloom from his home. Now he must work to defend his home from them.

Max Mercer is a mischievous and resourceful young boy who has been left behind while his family is in Japan for the holidays. So when a married couple attempting to retrieve a priceless heirloom set their sights on the Mercer family’s home, it is up to Max to protect it from the trespassers…and he will do whatever it takes to keep them out. Hilarious hijinks of epic proportions ensue, but despite the absolute chaos, Max comes to realize that there really is no place like home sweet home.

Free to all subscribers for Disney+ Day, Jungle Cruise is a fun, witty, and wild movie starring Dwayne Johnson and Emily Blunt based on the beloved Disneyland attraction.

This film is a rollicking thrill-ride down the Amazon with wisecracking skipper Frank Wolff and intrepid researcher Dr. Lily Houghton. Lily travels from London, England to the Amazon jungle and enlists Frank’s questionable services to guide her downriver on La Quila—his ramshackle-but-charming boat. Lily is determined to uncover an ancient tree with unparalleled healing abilities—possessing the power to change the future of medicine. Thrust on this epic quest together, the unlikely duo encounters innumerable dangers and supernatural forces, all lurking in the deceptive beauty of the lush rainforest. But as the secrets of the lost tree unfold, the stakes reach even higher for Lily and Frank and their fate—and mankind’s—hangs in the balance.

We are so excited to hear Olaf finally have the chance to retell some of Disney’s most famous stories in his unique and fast-paced style!

After the success of recent crossovers with Loki and Star Wars, Disney+ is bringing us a new short from The Simpsons that pays tribute to Disney+’s marquee brands.

The World According to Jeff Goldblum – Season 2

Through the prism of Jeff Goldblum’s always inquisitive and highly entertaining mind, nothing is as it seems. In “The World According to Jeff Goldblum,” each episode is centered around something people all love — like sneakers or ice cream — as Jeff pulls the thread on these deceptively familiar objects and unravels a wonderful world of astonishing connections that are both surprising and exciting. Through fascinating science and history, amazing people, and a whole lot of big ideas and insights, Jeff Goldblum provides an interesting take on the world.

Star Wars fans rejoice! A new special focusing on the origins and legacy of Star Wars’ legendary bounty hunter, Boba Fett before the release of his new show, launching December 29.

If you thought Disney couldn’t get enough Frozen, think again. Looks like Elsa is feeling under the weather, and potentially threatening Anna’s birthday.

Elsa wants to throw a surprise birthday party for Anna with the help of Kristoff, Sven and Olaf. However, she gets a cold and unknowingly creates animated snowmen who destroy the decorations.

James’s dog named Winston enjoys eating portions of junk food offered by his master. However, when James’s girlfriend tells him to switch to healthy food, Winston is unable to enjoy fast food.

Mickey and his friends go on a peaceful wagon ride until Peg-Leg Pete tries to run them off the road.

After being flattered by a girl while travelling to work in a train, a man tries to catch her attention by using a fleet of paper aircraft.

If you enjoyed the recent Disney+ original content like The Imagineering Story and Behind the Attraction, you’re going to love this tale of Pixar and how it became the beloved animation giant it is today.

The story of the pioneering computer animation studio Pixar, featuring contributions from the studio’s bosses and a host of actors who have lent their voices to their creations, including Tom Hanks. Films such as `Toy Story’ and `A Bug’s Life’ have led to the studio becoming one of the most consistently successful, both critically and financially, of recent years.

Another month, another television series from the Marvel Universe. This time, we’re following Hawkeye as he works with the young archer Kate Bishop to confront enemies from his past in order to get back to his family in time for Christmas.

In this new series, Jeremy Renner reprises his long-time role as Clint Barton/Hawkeye, with Hailee Steinfeld stepping into the role as Kate Bishop.

The Beatles: Get Back – Episode 1

Another great documentary coming to Disney+, The Beatles: Get Back will feature original video footage and audio from the late 1960s recording sessions with John Lennon, Paul McCartney, George Harrison, and Ringo Starr.

Directed by three-time Oscar-winning filmmaker Peter Jackson (“The Lord of the Rings” trilogy, “They Shall Not Grow Old”), “The Beatles: Get Back” takes audiences back in time to the band’s intimate recording sessions during a pivotal moment in music history. The documentary showcases the warmth, camaraderie and creative genius that defined the legacy of the iconic foursome, compiled from over 60 hours of unseen footage shot in January 1969 (by Michael Lindsay-Hogg) and more than 150 hours of unheard audio, all of which has been brilliantly restored. Jackson is the only person in 50 years to have been given access to these private film archives. “The Beatles: Get Back” is the story of John Lennon, Paul McCartney, George Harrison and Ringo Starr as they plan their first live show in over two years, capturing the writing and rehearsing of 14 new songs, originally intended for release on an accompanying live album. The documentary features – for the first time in its entirety – The Beatles’ last live performance as a group, the unforgettable rooftop concert on London’s Savile Row, as well as other songs and classic compositions featured on the band’s final two albums, Abbey Road and Let It Be.

The Beatles: Get Back – Episode 2

The Beatles: Get Back – Episode 3

Wow! What a month. We hope there’s something on this list that you’re excited for, and look out for more updates regarding the upcoming Disney+ Day happening on November 12! If you have not yet signed up for Disney+, you can get started by clicking here!

Which film or television show are you most looking forward to streaming in November? Let us know in the comments!

Comments Off on Here’s What’s Coming to Disney+ in November!