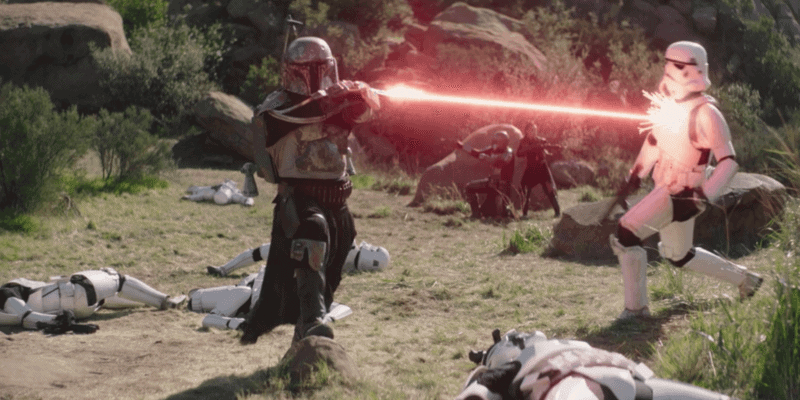 Star Wars bounty hunter Boba Fett has had a cult following since he made his canon debut in Star Wars: Episode V – The Empire Strikes Back (1980) — prior to that he appeared, in animated form, in the regrettable Star Wars Holiday Special (1978) — and now, the clone in the Mandalorian armor is playing a bigger role than ever before in the Star Wars story.

Temuera Morrison is playing Fett these days, and he made his triumphant return in Jon Favreau and Dave Filoni’s The Mandalorian Season 2 last year. Fett officially showed back up to reclaim his beskar armor — which had fallen to Mos Pelgo Marshal Cobb Vanth (Timothy Olyphant) at some point after the Sarlaac pit incident in Star Wars: Episode VI – Return of the Jedi (1983) — in “Episode 14: The Tragedy”.

After Grogu (AKA “Baby Yoda”) is kidnapped from the Jedi Seeing Stone on planet Tython, Fett and Fennec Shand (Ming-Na Wen) team up with Din Djarin (Pedro Pascal) and his motley band of misfits, including former prisoner Migs Mayfeld (Bill Burr) and ex-shock trooper Cara Dune (Gina Carano) to rescue the foundling from Moff Gideon (Giancarlo Esposito) and his Dark Trooper squad.

Eventually, of course, it took the return of Jedi Knight Luke Skywalker (CGI Mark Hamill) in the season finale — Peyton Reed’s “Chapter 16: The Rescue” — to save Grogu, but we haven’t seen the last of Fett. Not only is he getting his very own spinoff series entitled The Book of Boba Fett, but he’s coming to another popular franchise.

Yesterday, it was confirmed that the Star Wars icon is joining the Fortnite video game franchise for the second time:

Boba Fett will be making his arrival on the Island December 24, 2021 at 7pm ET! #DisneyPlusDay

Boba Fett will be making his arrival on the Island December 24, 2021 at 7pm ET! #DisneyPlusDay pic.twitter.com/cj9iC6WRBZ

The Fett skin is set to drop on Christmas Eve, just five days before The Book of Boba Fett hits Disney+ on December 29, 2021.

One report noted that this isn’t the first time Fett has crossed over into Fortnite, but this appears to be a much more substantial appearance than the last time around:

Alongside the new Fortnite skin, Disney also revealed a new documentary, Under the Helmet: The Legacy of Boba Fett which charts the character’s humble beginnings as a “supertrooper” to his upcoming solo TV series.

Of course, this isn’t the first time a Mandalorian has appeared in Fortnite with Din Djarin, the star of The Mandalorian, available last year as part of a special questline.

Although little is known about the specific plot of Robert Rodriguez’s The Book of Boba Fett, we do know it will be set on Tatooine following Fett and Shand’s takeover of Jabba the Hutt’s former palace in The Mandalorian Season 2 post credits scene. Favreau has billed the show as “the next chapter” of The Mandalorian, and cameos by characters like Mandalorian leading man Pascal, Vanth, and even Han Solo (CGI Harrison Ford) have been rumored, but remain unconfirmed at this time.

What do you think about Boba Fett returning to Fortnite?