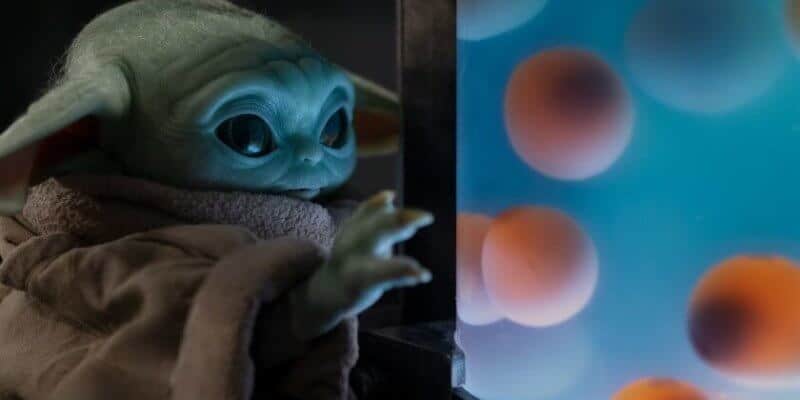 If there’s one thing most Star Wars fans can agree on, it’s that the sequel trilogy — Episode VII – The Force Awakens (2015), Episode VIII – The Last Jedi (2017), and Episode IX – The Rise of Skywalker (2019) — left much to be desired. One of the biggest issues with the movies was the sheer existence of Supreme Leader Snoke (Andy Serkis), who seemingly appeared out of nowhere and whose origin was never clearly explained, other than serving as a placeholder for Kylo Ren (Adam Driver).

Ever since Season 1 of the hit streaming series, showrunner Jon Favreau and executive producer Dave Filoni have been doing everything in their power to fix the Star Wars sequels’ Snoke problem.

The trio, plus much-maligned Mythrol (Horatio Sanz), soon discover that the base is not operating with a skeleton crew at all, and chaos ensues — as it generally tends to in The Mandalorian — and they ultimately stumble upon the aforementioned lab under the direction of Moff Gideon (Giancarlo Esposito).

The group discovers a transmission from Doctor Pershing, in which he says:

“Replicated the results of the subsequent trials, which also resulted in catastrophic failure. There were promising effects for an entire fortnight, but then sadly, the body rejected the blood. I highly doubt we will find a donor with a higher M-count [midichlorian count] though. I recommend that we suspend all experimentation. I fear that the volunteer will meet the same regrettable fate if we proceed with the transfusion. Unfortunately, we have exhausted our initial supply of blood. The Child is small and I was only able to harvest a limited amount without killing him. If these experiments are to continue as requested, we would again require access to the donor. I will not disappoint you again, Moff Gideon.”

The female clone is in the company of bounty hunter Cad Bane (Corey Burton), who stole her away from Clone Force 99 — Hunter, Wrecker, Tech, and Echo — on Bracca in Episode 8 (“Reunion”), much like how Moff Gideon’s Dark Trooper squad took Grogu from Djarin on Tython in The Mandalorian Season 2, Episode 6 (“Chapter 13: The Tragedy”).

Ironically, one character, Fennec Shand (Ming-Na Wen) appears in both “Bounty Lost” and “The Tragedy”. Filoni, in fact, used a scene between Shand and Omega to set up what is likely to happen in the third season of The Mandalorian.

While on that planet [Boro Vio], Omega [with Shand] comes face to face with tanks full of rejected cloning experiments. The tank is too cloudy to see the creatures in detail, but concept art [below] from the episode reveals some truly gruesome Eldritch horrors of cloning experiments gone wrong.

Since The Bad Batch is geared at both adults and a younger audience, it’s likely that the series won’t explore the atrocities of cloning experiments gone wrong in great detail. As Inverse’s article proposed:

…now that Moff Gideon’s Dark Troopers are destroyed, could his next weapon turn out to be some sort of terrifying clone? Are we about to see an army of Snokes in The Mandalorian Season 3?

It seems that Favreau and Filoni are forging full steam ahead with their explanation of Supreme Leader Snoke, perhaps by introducing a truly intense form of biological warfare into The Mandalorian universe.

If Moff Gideon does, in fact, use a deformed, Force-sensitive, Snoke-like clone as a weapon, it will go a long way toward tying the divisive JJ Abrams and Rian Johnson sequel trilogy into the Mando-verse, which is likely to be the most crucial part of the Star Wars franchise moving forward.

What do you think? Are we about to see a deformed clone used as a weapon now that Moff Gideon has lost the Darksaber?

Next up for Star Wars? The Book of Boba Fett debuting in December 2021. The series will star Temuera Morrison as Boba Fett and Ming-Na Wen as Fennec Shand. The Mandalorian Season 3 and Ahsoka, with Rosario Dawson as Ahsoka Tano, are expected in 2022.