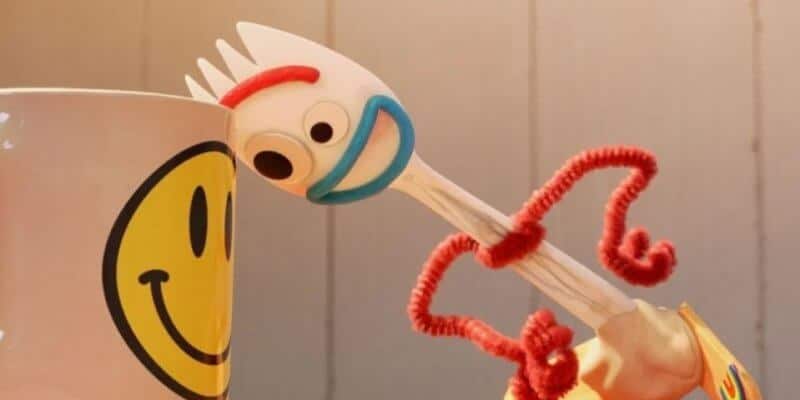 It’s been almost a month since Disney+ went live. I can’t get enough of it, and I know I’m in good company. Binge-watching has never been my bag, unless you count I Love Lucy, but since the launch of Disney’s new streaming service on November 12, I’m finding myself more and more glued to the TV. Yes, over the last few weeks, my husband’s new big screen and I have become best pals it seems, and my kids aren’t exactly thrilled that I’ve commandeered their Xbox One to feed my new addiction. (Perhaps Santa will bring me a new generation Apple TV; then I’ll consider surrendering the console.)

If ever there were a Disney addict, I’m qualified to wear the title. So a streaming platform that makes Disney classics, films from the Toy Story franchise (except for Toy Story 4—never want to see it again, thank you), Disney Christmas movies, an exclusive new series about Imagineering, and NatGeo’s Drain the Ocean effortlessly available at my fingertips is pure magic–the kind only Disney can deliver.

And it’s not as if we don’t have every single Disney movie on DVD, Blu-Ray or 4K at home already, right? But Disney+ has become the one-stop shop for it all–no need to get up and switch Blu-Rays–and the new content is some of the best stuff to be produced in the industry.

At just $6.99 per month, Disney’s new streaming service is beyond affordable, especially when you consider all the offerings on the platform. And you can stream across 1,000 devices at once. Ok, not 1,000, but Disney is generous even in that. The newest competitor in the streaming wars would have been a win at a monthly cost of $6.99 even if vault films, classics and Disney Junior and Disney Channel series were the only things available for streaming.

But the platform is also the go-to place for all things Marvel, Star Wars, Pixar and National Geographic. And some of the new content developed exclusively for Disney+ that I detail below is so good, I almost feel guilty for paying so little.

Have you watched this one yet? It’s one of Pixar’s newest projects inspired by the lovable new trash/toy/trash/toy from Toy Story 4. (Didn’t like the movie; love the spork, though.) You can only find the new series of shorts on the Disney+ platform. In Forky Asks a Question, Forky always asks a question (profound, right?) and then looks to a pal from the Toy Story franchise to help him answer it.

He even makes new friends along the way, like the mug Forky lovingly names “What? No!!”

Forky’s only problem is that he often gets distracted by other things when his friends are explaining new concepts to him. So far, Forky has asked what money is, what time is and what a friend is, among other questions. The “episodes” aren’t but 3 or 4 minutes long, but they’re sure to conjure up a chuckle or two.

It’s not that the questions Forky asks are existential; it’s not that the series showcases some amazing piece of next-generation animation (except that Pixar has always been one step ahead in animation, among other things). The draw toward Forky Asks a Question is in part due to the magnificence and creative authority with which Pixar develops a character, sets up and answers his question, tells a story within that exchange and even gets us to laugh–all inside a five-minute-long short. It’s what makes Pixar, Pixar.

One Day at Disney

We first learned about One Day at Disney in August at the 2019 D23 Expo in California. It was the “surprise” of the evening on the Thursday evening before the Expo officially kicked off. But no introduction could have truly done it justice. One Day at Disney premiered on Disney+ on December 3, and if you have even a basic curiosity about what goes on around the Disney Empire each and every day, this one is worth a stream.

Imagine being a fly on the wall inside a building that houses an attraction at Walt Disney World in Florida or at Disneyland in Anaheim, California. What would it be like to sit in on a meeting between Disney CEO Bob Iger and the creative flow at Pixar in Emeryville? And imagine being right there at Disneyland, Paris, as Cast Members prepare for a new nighttime spectacular, or take a backstage glance as performers ready themselves for the next production of a stellar “Disney-esque” Broadway-style show. One Day at Disney gives this kind of insight.

It’s the first documentary Disney has ever produced that takes a look at the full range of the responsibilities of those who work for the massive Empire of the Mouse. It’s narrated by Sterling K. Brown from This is Us and Frozen 2. The December 3 episode is an hour long and gives viewers an up-close and unique perspective about the jobs and lives of 10 different Disney employees. Subsequent episodes–52 in all–will only be about 4 to 7 minutes long, but if the initial episode is any indication of the awesomeness of the series, each episode will be 4 to 7 minutes of sheer genius mixed with magic served up with a side of wow!

Yeah, I know; you’ve been wondering where this little gem was on my list of Disney+ treasure. I can tell you that it’s front and center. Jon Favreau may have done well with the live-action remake of The Lion King, and even the staunchest, grouchiest critic would have told you The Mandalorian was going to go over well; no lead balloons were forecast. But Favreau’s knack for storytelling has hit this one out of the park.

Many felt it would be successful for two reasons: first, it has the word “Lucasfilm” somewhere in the closing credits and second, it had a proverbial green light from ol’ George himself. After all, not too many Star Wars-themed things flop. Of course it was going to be a hit! There are about 400 bazillion fans of the galaxy far, far away in the United States alone (give or take a bazillion). How could it fail? (Especially with Baby Yoda making playthings out of the gears in Mando’s ship?)

But I daresay no crystal ball could have predicted the kind of unbridled success being enjoyed by the new Mandalorian saga–a saga that, by the way, has officially been inducted into the Star Wars canon–a feat that neither Star Wars: The Clone Wars, Star Wars Rebels or the Star Wars-based comics has been able to pull off. And perhaps one of the most magical things about The Mandalorian yet is its unprecedented ability to convert non-Star Wars Disney fans into Star Wars fans who also love all things Disney. (That’s been my experience so far–my favorite episode at this point being last Friday’s Chapter 4, “Sanctuary.”)

I’ve never considered myself a fan of Star Wars; I don’t hate it. I just haven’t ever been into it. But my youngest 18-year-old (I have two 18-year-olds who aren’t twins) has been a fan of all things George Lucas for years now. His favorite character is Boba Fett, so The Mandalorian was an automatic for him. Because I’d written about the new show here at Inside the Magic, I told him I’d watch the first episode with him.

Today, I stand before you a convert–a Mandolorian fan who now, like my son, lives for the episode drops every Friday and a rookie Star Wars fan who’s already bought tickets to The Rise of Skywalker. I’ve even gone so far as to develop 3 or 4 different prophecies about the ending of Episode IX, including one in which Kylo Ren enjoys a Vader-esque redemption and one in which Rey is Luke’s daughter, but the Dark Side ultimately has a more “force”-ful stronghold on her, if you’ll pardon the pun. Thank you Jon Favreau.

This is a story that needed to be told for a long time now–the story of Disney’s storytellers. If you can only stream one show on Disney+, let it be this one!

While everyone else is singing The Mandalorian’s praises and holding hands around Baby Yoda while singing Kum-Ba-Yah, I’m over here in my happy place streaming episodes of The Imagineering Story and telling myself that it’s never too late to become an Imagineer. Or the wife of one–my husband is exceptionally creative and talented and has always admired the work of Tony Baxter, Marty Sklar, Joe Rohde, and others who make up the conglomerate genius behind Disney’s many projects all the world over.

The Imagineering Story comes from the brilliant mind of Leslie Iwerks, who directed and executive produced the series. If you’re a Disney fan and you’re thinking you’ve seen that name before, it’s because you have. Leslie is the daughter of Disney Legend Don Iwerks and the granddaughter of Ub Iwerks, Walt’s partner in creating Mickey Mouse and Oswald the Lucky Rabbit. And the greatness and creativity that comes standard with the Iwerks name are certainly evident in this docuseries that gives viewers an in-depth, inside look at the history of Disney Parks, among other facets at the core of Disney’s massive empire.

The series has already received critical accolades, and fans of the Empire and the Imagineers who keep Disney at the forefront of innovation, technology and progress are crazy over The Imagineering Story. 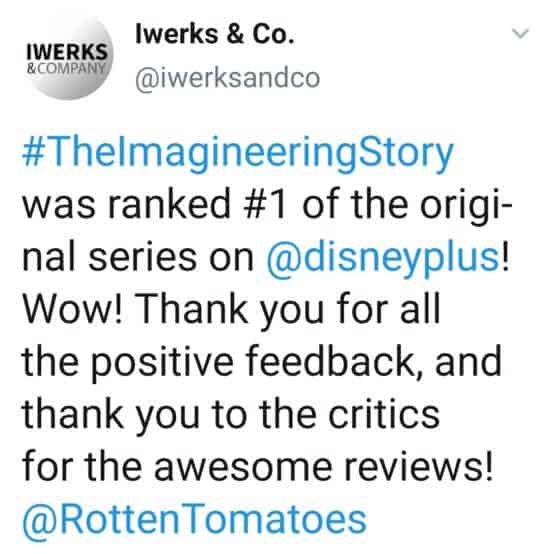 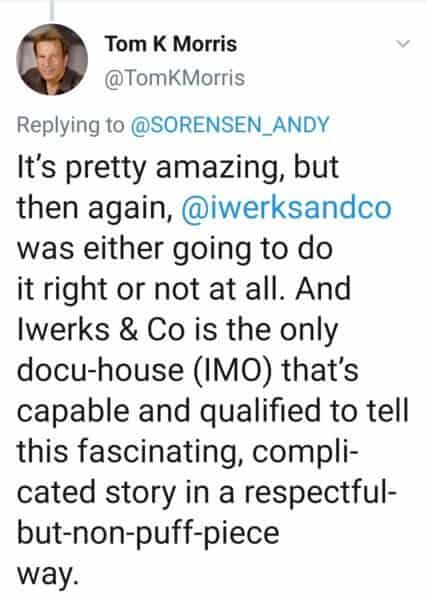 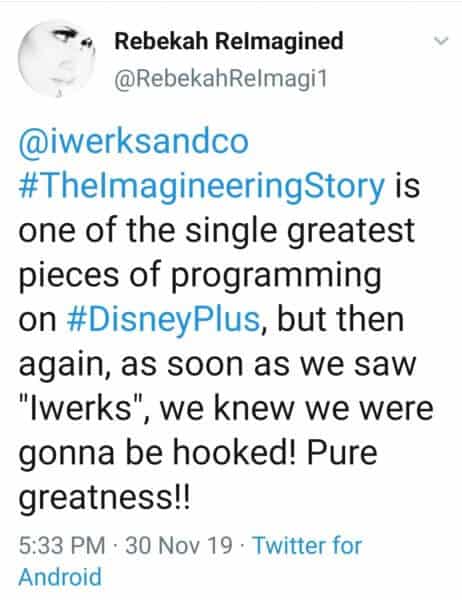 Episode 2, “What Would Walt Do?” had me visibly crying. It’s so moving to see Walt on-screen, to listen to his voice and in turn, hear his heart–that which he put into everything he did. In Episode 3, “The Midas Touch,” gave viewers such an honest, intimate look at Michael Eisner that some Disney fans were converted from “Eisner blamers” to “Eisner fans.” The episode put to rest any rumors that Eisner was anything less than 100% dedicated to the success of Disney and to honoring Walt while in pursuit of it and handled very delicately the untimely passing of Eisner’s partner Frank Wells.

Are you a Disney+ subscriber and have you watched any of these series yet? Tell us about your favorite Disney+ series in the comments section below.

Comments Off on OpEd: 4 Disney+ series so good, we feel guilty for only paying $7/month