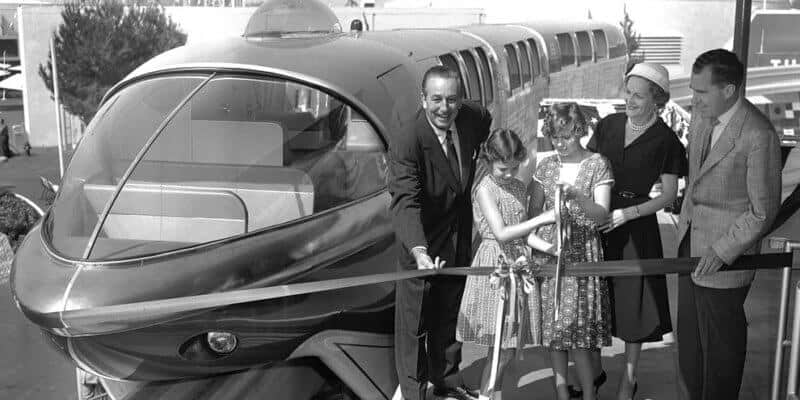 So, the news broke a few weeks ago that President Trump is coming to Walt Disney World (the trip was later postponed – a new date has not yet been set), and the Place Where Dreams Come True might host a Republican Party event. This is not something new. Yes, Walt Disney World is a favorite convention setting for almost every organization.

It was the location President Obama visited for the annual conference of the National Association of Latino Elected and Appointed Officials. But, this is not the first time Disney history and U.S. Presidential history have become intertwined. In fact, every president since Harry S. Truman except Lyndon B. Johnson has visited a Disney Park, and since the opening of Disneyland, you will find a few points of Disney History that feature a U.S. President and points of U.S. Presidential history that feature a Disney Park.

Here are a few of those points grouped by U.S. President:

We start with President Reagan because he was present at the very start of all Disney Parks. Many readers will know that before the late president went into politics, he was an actor and TV personality.

Well, this TV personality got asked to co-host the televised grand opening ceremonies of Disneyland back in the summer of 1955. If you were to watch a playback of the opening day coverage, you would find the young Ronald Reagan gives off a rather Ryan-Seacrest-like charm, and he gave the official on-air intro that led into Walt Disney’s famous commencement speech.

After his tenure as first California Governor, and then U.S. President, The Gipper returned to Disneyland again in 1990 for the 35th Anniversary Celebration. And while it may be hard to believe for some, there was a point not too long ago when the names “Dutch Reagan” and “Walt Disney” were as integral to California’s identity as the beaches and Hollywood. (Ask a Boomer. They’ll confirm it.)

President Kennedy visited Disneyland only once. In October of 1959, then-Senator Kennedy spent the day at Disneyland with the President of Guinea, Ahmed Sékou Touré. But, two major Disney events happened around November 22, 1963.

Disneyland closed on November 23, 1963. A park that never seems to take a day off, closed its doors to honor and remember the late president joining the rest of the country in a national day of mourning.

The site of Walt Disney World was discovered on the same day as the Kennedy Assassination. On November 21, 1963, Walt Disney flew to Tampa, Florida to review three possible sites for his next park. On November 22, 1963, Disney flew over a patch of land covering 12,400 acres owned by two cousins Bill and Jack Demetree. Walt simply pointed out the window and said, “That’s it!” and supposedly pointed to the exact spot that would become Tom Sawyer’s Island.

In the corporate sense, this was a secret reconnaissance mission. So, instead of landing in Orlando, Walt immediately began his flight back to California. It wasn’t until his plane landed in New Orleans to refuel that he learned President Kennedy was shot in Dallas.

A rather frivolous historical moment is warranted after such a sobering one. Back in 1982, President Carter was attending a conference at the Disneyland Hotel and while on-property, he took a running tour of the park. While Disneyland and Walt Disney World both have running events every year now, Jimmy Carter was the first and still is the only U.S. President to have a running tour of Disneyland. (Fitness Fanatics take note).

But before his run, President Carter also made a special visit to Walt Disney World. In 1978, he stood in front of Cinderella’s Castle and spoke to the 26th World Congress of the International Chamber of Commerce gathered in the Magic Kingdom.

President Nixon is still considered–by the numbers–the biggest Disney fan out of any U.S. President. The California politician who Walt Disney referred to as “my friend, Dick Nixon,” still holds the record for the most visits to Disneyland by any U.S. President.

By invitation of Walt Disney, then-Vice-President Richard Nixon and his family were on hand for the grand opening of the original Disneyland Monorail System; the first monorail system built in the western hemisphere. The Nixon family climbed into the front cab and legendary Imagineer Bob Gurr piloted the monorail to the Tomorrowland station where a ribbon-cutting ceremony took place.

In total, President Nixon visited Disneyland in 1955, 1959, 1961, and 1968. He only made one visit to Walt Disney World in 1973. That visit is immortalized by the words “I am not a crook.” Yes, the historic quote was first spoken at the Associated Press Managing Editors annual conference which was being held in one of the convention halls at Disney’s Contemporary Resort.

You can still visit that room today and stand where he did. 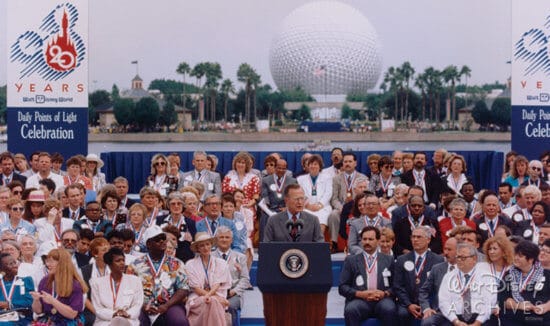 Ending on a positive note, in 1991, Walt Disney World’s 20th Anniversary Celebration was also the setting for the first gathering of President Bush Sr.’s Daily Points of Light award recipients. This award is still given to outstanding community volunteers across the U.S. and this gathering was a major part of WDW’s 20th anniversary. It was appropriately held at the American Gardens Theater in EPCOT. President George W. Bush responded in kind in 2004 and named Walt Disney World itself a Daily Point of Light.

These are just a few examples of the long tradition that is the relationship between Disney and the Presidency. Walt Disney received the George Washington Honor Medal of the Freedoms Foundation at Valley Forge from President Eisenhower, the Presidential Medal of Freedom from President Johnson, and President Carter made a presidential proclamation to honor the memory of Walt Disney and his work that gave the world “laughter and love, joy and gladness” in February of 1980. All in all, if this proves anything, it’s that Disney has a way to crossing party lines to take its place as an integral part of the identity of modern America.

This is but a sample of the visits by U.S. Presidents to Disney Parks. Do you have some Disney President history to share. If so please share in the comments below.

Comments Off on A Brief History of Disney Parks & U.S. Presidents