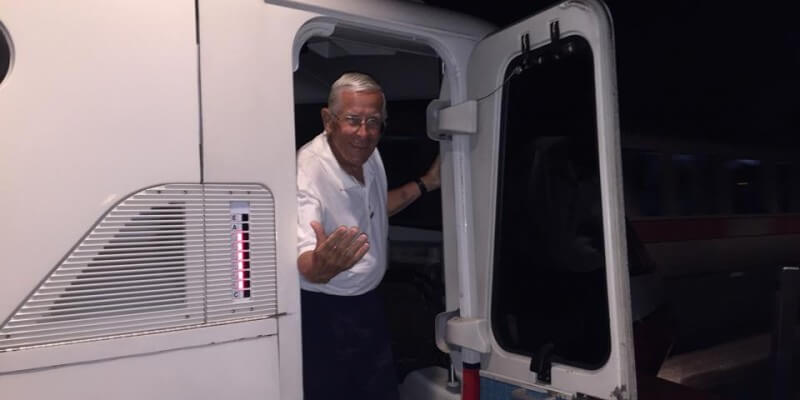 If you’re familiar with the monorails at Disneyland and Walt Disney World, the first thought that comes to mind for most people is probably the phrase “please stand clear of the doors; ¡Por favor manténgase alejado de las puertas!” For others, it’s the joyous thrill of riding on an electric highway in the sky and whizzing past a Swiss mountain, over a submarine filled lagoon or through the Grand Canyon concourse of the Contemporary Resort. Then there’s the group of individuals, like myself, who fall back into the origin story of the monorails where only one word is needed to bring about a smile and excitement; Gurr. Last night, Legends Events hosted an outing for its members that was classically called “The Monorail Crawl with Disney Legend Bob Gurr.” This event gave individuals the unique chance for some up close, one on one time with a true Disney legend. If you’re not familiar with Bob, to sum him up, he’s the guy Walt Disney personally hired in the 50’s to work on the project that was developing in Anaheim. If you’ve seen something move on wheels at Disneyland, Bob Gurr probably designed it. From autopia cars to submarines, Matterhorn bobsleds to the omnimover transporting the doom buggies to regions beyond, it was all Bob’s unique creativity that brought these vehicles & ride systems to life. Most recognizable of all his creations, which loops us back to the event, would be the monorails he designed for both Disneyland and Walt Disney World. At 86 years young, the quirky lovable comedian is one of the most approachable and recognizable figures from the golden days of Walt’s era, with an endless array of stories from his days working with the company, to the detailed discussions he had with Walt himself.

Bob shared numerous stories throughout the night, one of which is a personal favorite I heard him tell several years back about his first lap around the Magic Kingdom loop at full speed in the original Mark IV monorails. Then of course, there are the fan favorites stories of what it was like to work alongside the ultimate storyteller, Walt. With so many details that have been forgotten or displaced over time, it’s a real treasure to hear how the puzzles were put together and how simple some of the most challenging mechanics were solved from the ones who “imagineered” the results. One could say that when you have a visionary like Walt leading the way, it’s fairly easy to believe that if you dream it you can do. But for Bob, he always knew that if he drew it, he could build it, and it would move. Last night will surely go down as one of the most enjoyable evenings I’ve ever shared with someone. Hearing Bob’s stories of working with Walt, his own time with the company, and how he engineered the impossible so it could became possible with the construction of Disneyland and then later in the swamps of central Florida… it simply was magical. The ultimate bucket list item for any fan of the monorail would have been last night, and it was an honor to have crossed that one off of mine. At his request, he arrived by monorails, and entered with the Grand Floridian Lobby Society Orchestra playing “When You Wish Upon A Star.” I bought us a pair of Bombay sapphire Gurrtinis, we jumped on and off monorails while bar hopping, and parted ways in an enchanted tiki grog grotto, all with the receipts to prove that this dream really did come true.

Thanks for creating some new, cherished memories from outside the parks, Bob.