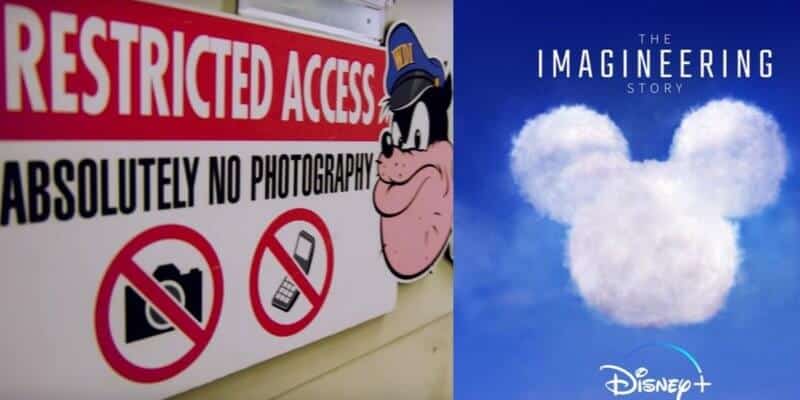 Disney+, Disney’s new streaming service debuting on November 12th, recently tweeted an all new trailer to the upcoming Disney+ original series, The Imagineering Story, which gives viewers a behind-the-scenes look at some of the upcoming Disney Parks attractions.

This Disney+ original six-episode series will be available during the Disney+ launch on November 12th and will tell the history and story of Disney’s Imagineering department. Let’s take a closer look at some of the behind-the-scenes views of both older and upcoming attractions in the new trailer.

During the preview to the 2019 D23 Expo, Disney fans were able to see what the costumes and ride vehicles will look like for the upcoming TRON Lightcycle Run attraction, coming to Magic Kingdom at Walt Disney World.

But thanks to this new trailer for The Imagineering Story, we now get to see an even closer look at how those vehicles operate and even a glimpse of the ride in action.

In the new Disney+ original series, Disney Imagineers are seen walking through the interior of the Star Destroyer that Disney guests will travel through while onboard the Rise of the Resistance attraction.

In December 2018, Disney guests got the chance to see a sneak peek at the new Belle and Philippe auto-animatronics coming to the Enchanted Tale of “Beauty and the Beast” attraction which will debut in Spring 2020 at Tokyo Disneyland.

But now, thanks to Disney+ original series, we get to see what the Beast animatronic will look like as well! Just for a split second in the trailer, viewers get a glimpse of the iconic Beast, and from the looks of it, he’s pretty spot on!

The trailer for the upcoming Disney+ series teases a behind-the-scenes view of the inter-sanctum of the Disneyland Matterhorn.

Yes, Walt Disney World has an underground city, but in the new Disney+ series, Imagineers will take you behind-the-scenes so you get to see what is really down there.

That’s only a small bit of everything that was shown in the new trailer. There are shots of Walt Disney himself enjoying some of the Disney attractions as well as shots of how the Disney Parks were built. From start to finish, Disney fans will be able to go behind-the-scenes and experience Disney like they never have before, thanks to the new Disney+ original series The Imagineering Story.

Behind-the-scenes of the Disney Parks dream. The Imagineering Story, an original series, streaming Nov. 12 only on #DisneyPlus. pic.twitter.com/COPxN0Utzz

Will you be watching The Imagineering Story when it debuts on Disney+ next month?