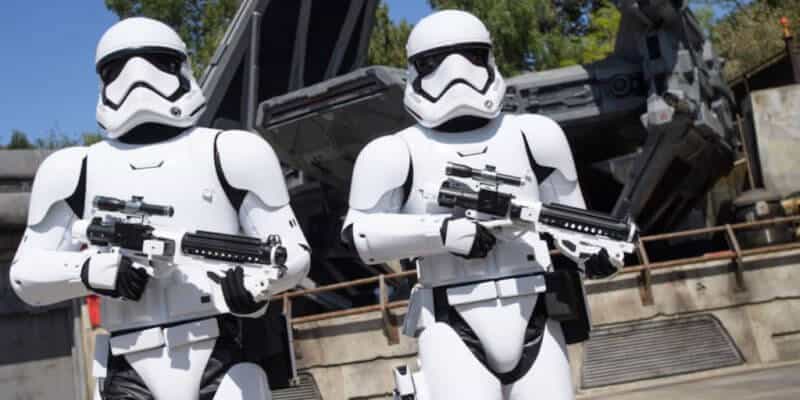 Mere days after news broke that a former elementary school principal posed as a Walt Disney World Resort Cast Member to steal a $10,000 R2-D2 statue, a thief in Oklahoma has absconded with another Star Wars statue.

The Tulsa Police Department hilariously took to Facebook to share a video of the incident, and there are clearly a few Star Wars fans on staff. The post [below] is full of references to a galaxy far, far away:

“Rebel Scum” Caught Absconding with a Stormtrooper — do you know this man?

It is entirely possible that he was upset with Order 66 and revenging the Jedi. However, in Oklahoma, it’s still a crime.

The Force Will Be Strong with the Chosen One who can bring this nerf-herder before the Jedi Council (or in this case, Criminal Court). Imperial Credit (AKA cash rewards) are paid for information that leads to an arrest.

If you recognize the suspect, please call Tulsa Crime Stoppers at 918-596-COPS. You can remain anonymous when calling.
Reference Case 2022-308035.
#TulsaPolice #ThisIsTheWay

In addition to referencing Emperor Palpatine’s prequel-era purge of the Jedi Order with the execution of Order 66, the post refers back to the original trilogy’s “Rebel scum” sentiment, and even pulls in the popular Disney+ series, The Mandalorian, with a #ThisIsTheWay hashtag.

At the time of publication, the post has 692 shares and nearly 300 comments. Tulsa Police have not provided an update regarding whether the stormtrooper-stealing suspect has been apprehended. Comments, however, noted that the theft was bizarre.

A KIRO news article about the Star Wars decor theft noted that the stormtrooper statue was “nearly full-size” and that the crime took place in a residential neighborhood, which is clear from the video.

The six-episode first season of the popular show was well-received and many fans were thrilled to see Hayden Christensen’s return as Sith Lord Darth Vader.

Although Season 2 has not been confirmed at this time, both fans and cast members have suggested they are open to continuing Kenobi’s story in the years between the prequels and Episode IV – A New Hope (1977).

Next up for Star Wars is Rogue One prequel series, Andor, starring Diego Luna reprising his role as Rebel spy, Captain Cassian Andor. The show debuts on Disney+ on August 31, 2022.

What do you think about the Tulsa stormtrooper theft?