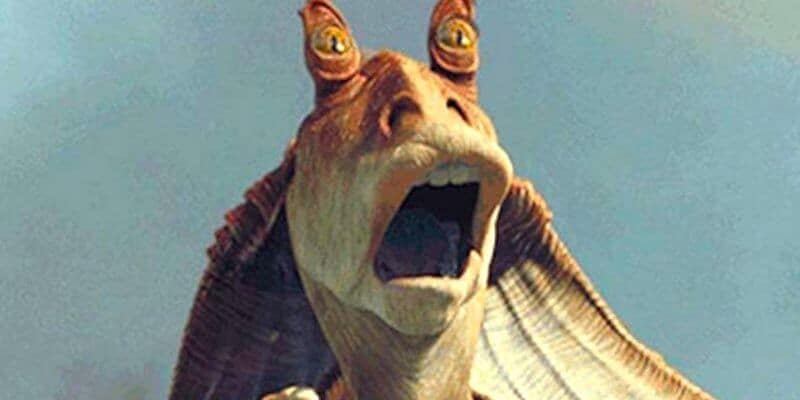 Jar Jar Binks is not a fan-favorite character within the Star Wars universe — and, now, he’s proven to be a bit unlucky for one Star Wars fan.

According to the New York Post, U.K. resident Marcus Reid, age 29, was assaulted with an arm ripped off of a seven-foot-tall, life-size model of the Gungan character during a brawl with his girlfriend’s stepfather, Neil Govier, age 36.

The Post’s report shares these details:

“Mr. Reid put Mr. Govier in a headlock. As they wrestled close to the Star Wars character Mr. Govier grabbed its head and ripped it off,” prosecutor Richard Oakley told a court.

“He then pulled off its left arm and swung it as a weapon,” he added.

Reid suffered suspected broken ribs after being struck with Jar Jar Binks’ arm in October in Charmouth, Dorset, according to the news outlet.

Mr. Govier, according to The Post, was fined for the assault.

Will We Ever See Jar Jar Binks Again?

Jar Jar Binks, who has been voted Star Wars’ most annoying character — let’s all pretend we’re surprised — is most well-known for his “Meesa going home” catchphrase.

But, will we ever see the character show-up in the Star Wars franchise again? Never say never. As Lucasfilm continues to expand their Star Wars content with new streaming series and movies set in various parts of the newly revamped Star Wars timeline, it is, presumably, possible that Jar Jar Binks could make another appearance.

Related: Liam Neeson Says He Would Come Back to ‘Star Wars’, Then Quickly Retires

Remember, however, that nothing has been confirmed by Lucasfilm and Jar Jar Binks actor Ahmed Best may have some reticence about returning, although he did host the Jedi Temple Challenge game show as Jedi Master Kelleran Beq last year.

Other prequel stars have leapt to Best’s defense through the years, with Entertainment Weekly reporting the following about Ewan McGregor (Obi-Wan Kenobi):

For the man who went from sleeping in his Star Wars sheets as a child to starring in a Star Wars movie, the negative reaction was humbling. “Jar Jar was a lightning rod for everything that folks didn’t like [about the movie],” Best says.

McGregor and other cast members rallied to his defense. McGregor says, “If there’s any criticism, it shouldn’t fall on Ahmed’s shoulders. Because he did exactly what he was asked to do. He did it very, very well. He gave a great performance.”

McGregor is set to reprise his role as the Jedi Master in OBI-WAN KENOBI: An Original Series on Disney+. Hayden Christensen has also been confirmed to come back as Anakin Skywalker/Darth Vader in the Deborah Chow-directed series.

There has been no word on whether or not Ahmed Best will reprise as Jar Jar Binks in the show.

The Gungan’s fate following Star Wars: Revenge of the Sith has never been fully explained, so it is possible that he will at least be referenced when OBI-WAN KENOBI: An Original Series eventually airs. No release date has been announced.

What are your thoughts on Jar Jar Binks?