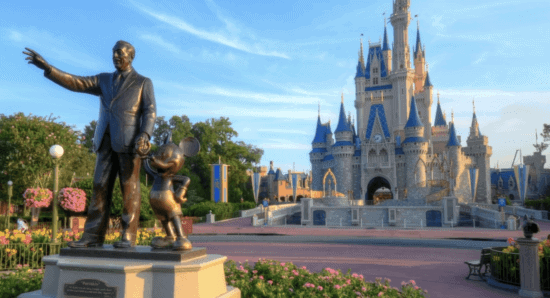 David Proudfoot disguised himself as a Disney World Cast Member and took the replica of the beloved Star Wars droid in a bid to show that Disney security is not as tight as it could be. Click Orlando reported on the bizarre situation:

Security reportedly called the sheriff’s office after a security guard noticed Proudfoot’s “suspicious” behavior in pushing a cart across the street onto Swan Reserve property.

Deputies said Proudfoot identified himself as “David E. Rodgers,” though there was no record of a person with that name found. Reports show Proudfoot was wearing a Walt Disney World-issued name tag inscribed with the name “David.”

Records indicate Proudfoot gave deputies information about his supposed job with the company, though Walt Disney Security found no record of his employment.

Eventually, Proudfoot admitted to stealing both the R2-D2 statue, valued at $6,000 to $10,000, and an arcade game machine and moving them to an “unknown location” on Swan Reserve property. It is not known at this time where Proudfoot took the items from.

Intriguingly, this is not the first time Proudfoot has been accused of theft. The former Baltimore County, Maryland principal allegedly embezzled $15,000 from his school district from 2013 to 2014 prior to resigning from his post last year.

Baltimore County Assistant State’s Attorney Adam Lippe said the alleged theft involved “fraudulent reimbursements,” in which Proudfoot said he was buying items for the school, but did not.

At the time of the Sun‘s report, Proudfoot was working as an assistant principal in Seminole County, Florida. It is unknown what his current employment status is, though he previously applied for a Walt Disney World Resort security job, but did not get the position.

This may be what prompted his most recent theft.

What do you think about this strange situation?