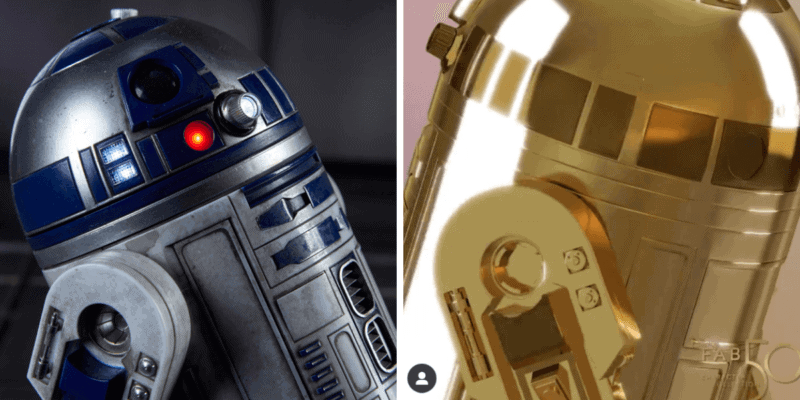 A golden statue of everyone’s favorite astromech droid is coming to one Disney Park — here’s what Disney just announced and when you can see R2-D2 at Walt Disney World Resort!

Walt Disney World Resort in Florida is celebrating its 50th anniversary beginning October 1, 2021. The celebrations will last a full 18 months, and Disney is pulling out all the stops and bringing all-new decorations, shows, and special experiences to the theme parks to commemorate this milestone. One of the ways Disney is marking the occasion is through an exciting project — the Fab 50!

As Disney shared, “50 fabulous Disney characters will be cast in gold and displayed across our theme parks.” The first of these statues revealed was, appropriately, Mickey Mouse himself.

During the magical celebration, which begins on Oct. 1, you’ll be able to find these golden character sculptures throughout all four of the Resort’s parks. And leading up to their appearances, friends from around the Disney company will be announcing which characters you can expect to see…

Now, we have another exciting Disney Fab 50 reveal — R2-D2 from the Star Wars universe!

Walt Disney Imagineering took to Instagram on Friday to share the latest Disney Fab 50 addition — a golden R2-D2 statue. The announcement was shared by Ann Morrow Johnson and Scott Trowbridge, two Imagineers who have been instrumental in bringing to life another new experience coming soon: Star Wars: Galactic Starcruiser.

See the full post by Walt Disney Imagineering below:

This R2-D2 statue can be seen at Disney’s Hollywood Studios Park at Walt Disney World Resort in Florida as part of “The World’s Most Magical Celebration” beginning this fall. We can’t wait to see the rest of the collection, which so far includes Goofy, the Cheshire Cat, and more!

Be sure to stay tuned to Inside the Magic as we continue to reveal the latest additions to the Disney Fab 50 Character Collection. We’ll continue to update our website with the latest news about the 50th anniversary celebrations.

Which character do YOU hope is added to the Disney Fab 50 Character Collection? Are you planning to visit Florida during Disney World’s golden anniversary? Let us know in the comments and CLICK HERE to book your trip!

Comments Off on Golden R2-D2 Statue Coming to THIS Disney Park!