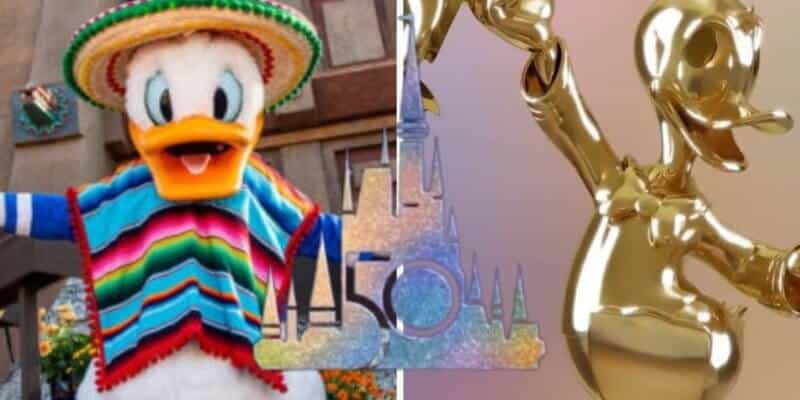 Fans of Walt Disney World are counting down the days until the 50th anniversary celebrations begin. One of the elements Guests will experience during this 18-month long celebration are interactive character statues featuring beloved Disney Parks characters!

In total, there will be 50 golden character statues, each of which will honor those who have shaped Disney for us in one way or another. So far, we know that Timon and Pumbaa from Disney’s animated classic, The Lion King, Winnie the Pooh and Piglet from The Many Adventures of Winnie the Pooh, Woody and Bo Peep from the Toy Story franchise, as well as the Cheshire Cat from Alice in Wonderland, will each have their own statues at Walt Disney World.

Additionally, Disney previously announced that two members of the Fab Five — Goofy and Mickey Mouse — would also each have their own interactive statue. Now, we are learning of a third member of the Fab Five will also be featured on a golden sttaue — Disney’s #1 duck, Donald!

Disney Animation took to Instagram to announce that Donald will be receiving his very own statue for Disney World’s 50th celebration:

Eric Goldberg, director and animator at Walt Disney Animation Studios has revealed that Donald Duck is part of the “Disney Fab 50 Character Collection” that you’ll soon find across the four @WaltDisneyWorld theme parks during “The World’s Most Magical Celebration” starting October 1 #DisneyWorld50

Inside the Magic will continue to update you as we get information regarding the Disney Fab 50 Character Collection.

Who else do you think will be part of the Disney Fab 50 Character Collection? Let us know in the comments below.