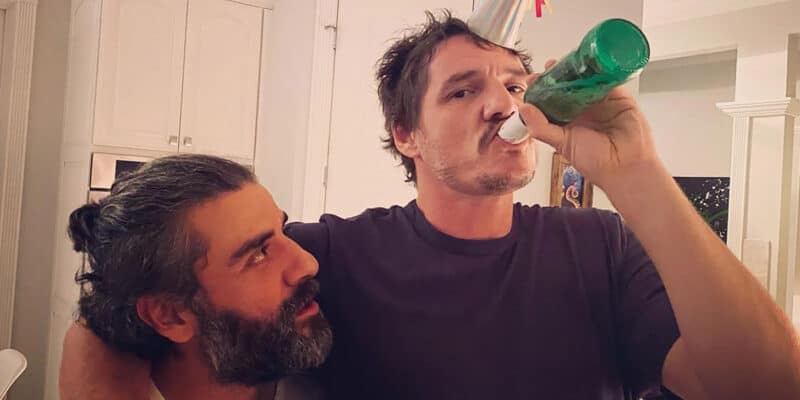 The Marvel Cinematic Universe’s newest Disney+ Original series, Moon Knight, is off to a strong start. Fans have been wildly supportive of Oscar Isaac’s debut as Steven Grant, a slightly nerdy gift-shop employee who discovers he is sharing a body with the mercenary killer, Marc Spector.

While Moon Knight is certainly tough, the question of exactly how strong he is seems to be a matter of contention between Isaac and his real-life best friend, Pedro Pascal.

Game of Thrones alum Pascal, of course, truly became a household name when he was cast in the leading role in Jon Favreau and Dave Filoni’s Star Wars series, The Mandalorian, which debuted on Disney+ on November 12, 2019.

Now, over the course of two seasons — and spinoff series The Book of Boba Fett — so far, the dynamic duo of Favreau and Filoni have taken Star Wars fans on a brilliant journey across the galaxy far, far away as Pascal’s bounty hunter Din Djarin and Grogu meet characters new and old — from adventures with Greef Karga (Carl Weathers) and Cara Dune (Gina Carano) on Nevarro to crossing paths with Bo-Katan Krzye (Katee Sackhoff) on Trask to learning Grogu’s tragic backstory from Ahsoka Tano (Rosario Dawson) on Corvus to the reintroduction of Jedi Knight Luke Skywalker (CGI Mark Hamill/Graham Hamilton).

Recently, Isaac asserted that his Moon Knight would “definitely” beat his buddy’s beskar-clad Mandalorian in a fight. Pascal, however, clearly disagrees.

The Narcos star just jokingly mocked Isaac during a red carpet interview, saying that it is “so sweet” he believes Moon Knight would best Djarin.

In the video below, a laughing Pascal says:

“Okay, let me just get this straight. So, he says that Moon Knight would beat The Mandalorian in a fight? That’s so sweet.”

We recently asked #OscarIssac who he thinks would win in a fight between #MoonKnight and #TheMandalorian — his answer: Moon Knight. Well, @PedroPascal1 has some thoughts (or should we say laughs) on that response… pic.twitter.com/1qzPcJddzZ

Although Isaac has previously said his time in the Star Wars franchise is over while Pascal’s Star Wars career is still going strong, both actors have experience in a galaxy far, far away.

Next up for both actors are Pascal’s Mandalorian Season 3 — which recently wrapped filming and is due to release this year — and Isaac’s leading role as Solid Snake in the film adaptation of the Metal Gear Solid video game franchise.

Pascal is also set to be part of a video game-inspired movie when he plays Joel in HBO Max’s recently delayed The Last of Us.

The MCU’s grittiest series yet is officially described as:

What do you think about Oscar Isaac and Pedro Pascal’s joking feud?