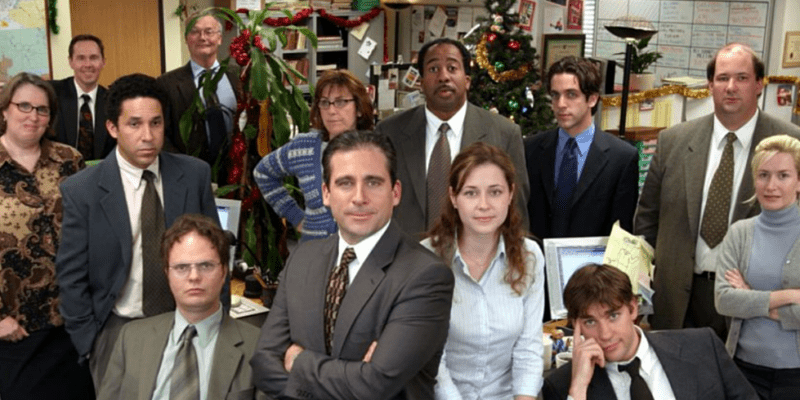 Moon Knight is being touted as Marvel Studios’ most intense, scariest Disney+ Original series to date, so The Office is probably the last series on Earth that Marvel fans would have expected to influence it.

The Office — which starred, among others, Steve Carrell as bumbling Michael Scott, Rainn Wilson as Dwight Schrute, Jenna Fischer as Pam Beasley Halpert, and Marvel hopeful John Krasinski as Jim Halpert — ran on NBC from 2005 to 2013.

Based on the popular British comedy series of the same name, the American version of The Office followed the exploits and misadventures of the employees of Dunder Mifflin Paper Company in Scranton, Pennsylvania.

A far cry, at first glance, from the story of Moon Knight‘s Steven Grant (Oscar Isaac), who was innocently working in the gift-shop of a London museum before discovering he was suffering from dissociative identity disorder and is, in fact, involved in a mystery of pyramid-sized proportions involving Egyptian gods like Khonshu.

And yet, in a recent Moon Knight press conference, leading man Isaac confirmed that The Office — which, somewhat ironically, was the basis of an episode of MCU series WandaVision — did play a major role in the development of Grant’s character. The Star Wars sequel trilogy alum shared:

“I don’t know, it was set in London. And when I asked why it was like the answer was we just have too many characters in New York. So it seems like let’s just change it up. Let’s make him an expat in London. And so I was like, okay. But then it felt like there was — I mean, I love English humor, like The Office.”

“And there’s just so much of that humor that I just find so funny, and I thought there’s an opportunity here to maybe make something. What if we make him English? What if Peter Sellers was approached with a Marvel project, what would he do? And so I started thinking about that, and that led me to Karl Pilkington from An Idiot Abroad. And not so much for the accent but just for his sense of humor where he doesn’t know — you know, you can’t tell if he knows he’s being funny. And then, I thought about the Jewish community in London and where a lot of that community is from and Enfield as an area and sort of listening to accents that are northeast London. And then just committed to that…”

Gritty Moon Knight has a six-episode run and will debut on Disney+ on March 30, 2022.

What do you think of The Office influencing Marvel’s newest antihero?