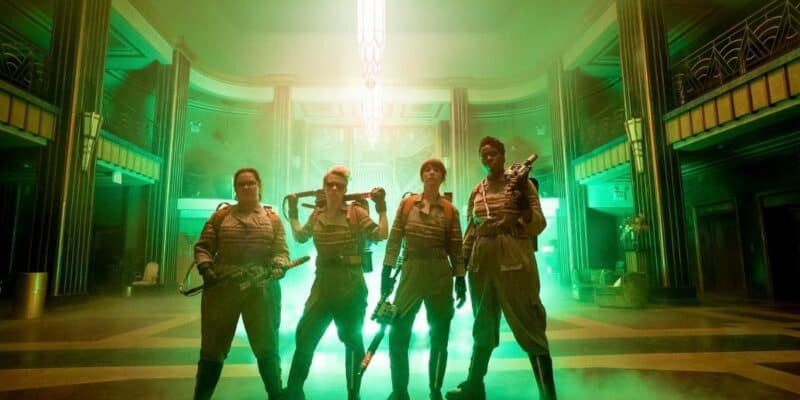 It’s no mystery that most Ghostbusters fans do not like Ghostbusters: Answer the Call (2016), the Ghostbusters reboot directed by Paul Feig. When the first trailer appeared on YouTube ahead of its release, a whirlwind of anger followed — some might say it was supernatural in its own right!

While there are undoubtedly a number of people who were unhappy with the fact that the reboot was being led by an all-female cast (members of the cast and crew became the target of a torrent of online abuse), this is not a fair representation of the fanbase in its entirety.

Those familiar with Ghostbusters lore beyond the original two movies will have known back in 2016 that female Ghostbusters already exist in the wider universe. The most notable is fan-favorite Kylie Griffin (Tara Strong) from the animated series Extreme Ghostbusters (1997).

Ultimately, Ghostbusters: Answer the Call just didn’t go down well with audiences for a number of reasons. Whether it’s the paper-thin plot, the cringe-worthy ad-libbing, the lack of originality, those horrible cameos from the original cast, or all of the above, the movie was a critical failure.

If you happen to like the film, then that’s great — after all, it does get a few things right. But if you don’t like the film, then you’d better hope that there isn’t a river of Psychomagnotheric Slime nearby, because Paul Feig’s reboot has since become part of the wider Ghostbusters universe!

We know what you’re thinking — how can a reboot of all things be set in the same universe as other movies in the franchise? Well, this has happened a number of times before, and also quite recently. In fact, it’s becoming something of a trend with major Hollywood movies.

JJ Abrams‘ Star Trek (2009) turned out to be anything but a straight-forward reboot, instead literally “resetting” the Star Trek universe with time travel. The film even stars the late Leonard Nimoy as Captain Spock, as seen in the original movies and TV shows.

Terminator: Genisys (2015) did the exact same thing — even if it failed to establish its own sequels. And more recently, the Marvel Cinematic Universe introduced previously non-canon Spider-Man movies into the fold, with Spider-Man: No Way Home (2021).

The X-Men film series is also famously known for doing this, with X-Men: Days of Future Past (2014). Like the Star Trek reboot, it uses time travel to hit the reset button on its own timeline, wiping all previous events (or future events, however you look at it) from canon.

A reboot or a remake no longer means the end of the previous franchise. Another example is the Halloween movies, which were rebooted with Rob Zombie’s Halloween (2007). But the original timeline would be later re-established with Halloween (2018), wiping the reboots from existence.

With all of that said, we’re not suggesting that the Ghostbusters reboot did the same thing. The film makes it perfectly clear that it’s an entirely separate entity to the original 1984 film and its sequels. In other words, it’s set in a very different universe.

Or is it..? There’s some evidence to suggest that there may be a connection between the 2016 reboot and the original Ghostbusters. And it all orbits that now-infamous concept: the multiverse. Yes, Ghostbusters, like many other franchises, has its very own multiverse.

If you’re a diehard Ghostbusters fan, you’ll be familiar with IDW Publishing’s long running Ghostbusters comic book series. It started in 2011 as an ongoing series, but during the COVID-19 pandemic, it ceased publishing and printing, which came as a blow to many fans.

IDW’s “Ghostbusters” (2011 — 2020) is comprised of nine main volumes, with a number of “one-shots”, “spin-offs” and “crossover events” dotted along its timeline. And it’s the latter we need to pay attention to, which so far have included Teenage Mutant Ninja Turtles and Trans-Formers.

The overarching premise of the series is that of Ghostbusters (1984) and Ghostbusters II (1989) — it follows Peter Venkman, Winston Zeddemore, Egon Spengler, Ray Stantz, and Janine Melnitz, as they bust ghosts across New York City in the years that follow the two movies.

Unlike the movies, though, the comic book series welcomes characters from the wider Ghostbusters universe, often calling upon counterparts from the animated shows, The Real Ghostbusters (1986 — 1991) and Extreme Ghostbusters, and even Ghostbusters: The Video Game (2009).

Many fans don’t know that, following the release of Answer the Call in 2016, the comic book series also welcomed Abby Yates, Patty Tolan, Erin Gilbert, and Jillian Holtzmann, who are played by Melissa McCarthy, Leslie Jones, Kristen Wiig, and Kate McKinnon in the movie.

“Ghostbusters: Answer the Call” (2017) might sound like a comic book tie-in of the movie of the same name, but it isn’t. The five-issue series forms part of IDW’s “Ghostbusters” collection, and follows on from the 2016 reboot, focusing exclusively on the characters from that film.

Within the comic book series universe, the main dimension is known as the “Prime Dimension”, while alternate versions across the multiverse, such as the home of The Real Ghostbusters and the 2016 reboot Ghostbusters, are known as “Dimension 80-C” and “Dimension 68-R”, respectively. These are all opened using an “interdimensional portal”.

This is the first and only time both teams have “crossed streams”. And while the comic book series isn’t necessarily connected to any the movies — Ghostbusters, Ghostbusters II, and Answer the Call — it is still considered “Secondary Canon”.

Up until the release of Ghostbusters: Afterlife, 2009’s Ghostbusters: The Video Game was actually considered “Primary Canon” (in conjunction with the 1984 and 1989 films). However, since the 2021 sequel somewhat contradicts events established in the game, it was demoted canonically.

So the comic book series exists in its own continuity, and quite frankly, it’s plain to see why. The idea of seeing the Ghostbusters meeting, say, their animated counterparts — as seen in the crossover event “Ghostbusters Get Real” (2015) — in a live-action movie, for example, is a bit too far-fetched.

As for seeing the reboot Ghostbusters cross over with the original Ghostbusters — never say never. Even though a sequel to the reboot is unlikely to happen, given the film’s underwhelming box office figures and critical response, there are some clues which suggest that the movies themselves — and not just the comic book series — may be connected to one another by a multiverse.

As you know, Bill Murray, Ernie Hudson, Dan Aykroyd, Annie Potts, and Sigourney Weaver make an appearance in Answer the Call, each of them as an entirely new character. But is it possible that these characters are simply “alternate reality” versions of the ones we know and love?

Perhaps the biggest clue that both movie universes may be connected, though, is Answer the Call‘s post-credits scene. The scene in question finds Patty Tolan listening to EVP (electronic voice phenomenon), only to hear the word “Zuul” over the airwaves.

Zuul is one of the villains from the original 1984 film and Afterlife, known also as the Gatekeeper. Whether or not Answer the Call was planning to recycle this villain in a follow-up that will probably never happen is unknown, but it’s possible that the movie was hinting at a multiverse. Or maybe it was just more lazy writing.

While we will likely never know the answer, we do known that Afterlife is getting its own sequel of sorts, in the form of Ghostbusters: Spirits Unleashed (2021), a multiplayer game coming to all major consoles later this year, which will see the return of Ernie Hudson and Dan Aykroyd.

Do you think the Ghostbusters reboot is connected with the main Ghostbusters series? Let us know in the comments below!