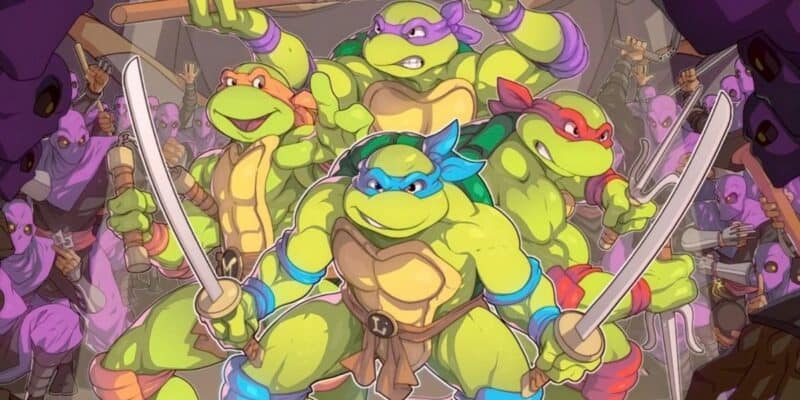 For a long-running franchise that boasts as many heroes and villains as Batman, and with a playground at its disposal that’s much bigger than Gotham City, why is it that we haven’t seen an open-world Teenage Mutant Ninja Turtles game yet?

After all, the anthropomorphic, pizza-loving reptiles are just as relevant as they were back in their heyday in the late ’80s and early ’90s. Recently, Paramount Pictures even announced that a number of movies are in the works, which includes Seth Rogen’s upcoming CG-animated reboot.

And with a number of major IPs getting their own open-world games, such as Hogwarts Legacy (2022), Avatar: Frontiers of Pandora (TBA), and Star Wars (TBA), it begs to question why we’re yet to see the half-shell heroes in their own sandbox environment.

With all that said, this is something that could still happen. There’s already a new Turtles game heading for all major consoles some time this year, titled Teenage Mutant Ninja Turtles: Shredder’s Revenge (2022), which is a “couch- co-op” reboot of the retro arcade games.

But forget arcade games — here are 10 things we want to see in an open-world Teenage Mutant Ninja Turtles game!

One of the great things about a sandbox environment is to immerse the player into the world, and what better way to bolster that sense of realism than to place them in one where time is moving. In other words, being able to experience the passage of time while adhering to certain rules.

So, day turns to night, the weather changes, and you’ll need to eat and drink for sustenance (yes, any excuse for pizza, we know!), and so on. As for ageing, we’re not sure “Middle-Aged Mutant Ninja Turtles” has quite the same ring to it, so it’s best to keep these guys in their teens!

This is something that would separate Teenage Mutant Ninja Turtles from other open-world games set in New York City (or at least inspired cities), such as Grand Theft Auto 4 (2008) or the various Spider-Man titles. Simply put, for the Turtles, New York City is that much bigger.

What’s unique about the city within the TMNT universe is that the Turtles often explore all three layers of it — the sewers, the city streets, and the skyline. A game spanning these three city levels would be big enough to put mega-sized game Red Dead Redemption 2 (2018) to shame!

This goes without saying, but we’ll say it anyway. Being able to choose which of the four Turtles you play — Leonardo, Raphael, Michelangelo, and Donatello — would be essential to getting the maximum experience from an open-world Teenage Mutant Ninja Turtles game.

After all, each Turtle has their own unique skills, weapons, and characteristics. You’d also be able to switch between them while you’re playing, so who knows which action-packed scenario you might find each character in. But whichever one you choose, you’d love being a Turtle!

An open-world game in this franchise must include a feature that requires each player to undergo the necessary training to become a ninja, or at least hone their existing skills, at Splinter’s underground dojo, so as to become fast, agile, and ultimately, be able to move in the shadows.

Using a range of stealthy tactics, you would take on certain missions, and even explore the city streets, without being seen. Something else that could lend to staying hidden while exploring during the day are disguises — after all, what’s a Ninja Turtle without a trench coat?!

6. The Option to Work

We get it — this might sound as dull as sewage water, but it’s something that usually forms part of most open-world games. And if you’re going to be living in the city (or beneath it, for that matter), you’ll need to earn your keep (sewer-based lairs aren’t cheap, you know)!

In the 3D-animated movie, TMNT (2007), both Michelangelo and Donatello have real jobs, one as a party entertainer, and the other as a remote technical support agent. Earning money in the game would allow you to do things such as order pizza, which, in turn, would give you energy!

Whether it’s something that’s as simple as facing The Shredder and his Foot Clan, or a more complex story that focuses on the Turtles and their desire to be part of the human world, it needs to be compelling. A great story is the driving force behind any game. Except maybe Tetris (1984).

The Turtles might move in the shadows, but they’re no strangers to having human friends throughout New York City, all of whom frequently help them fight crime and thwart the plans of The Shredder and other villains such as Krang, Bebop, Rocksteady, and Baxter Stockman.

Enter news reporter, April O’Neil, and vigilante, Casey Jones, who are as much a part of the Turtles family as Splinter is. But nothing short of seriously impressive AI is a must for all the characters (both playable and non-playable), which can usually make or break such a game.

New York City is a big place, and whether you’re navigating the sewer system or the streets, you’ll need a ride! And if you’ve seen all the cartoons and owned all the toys, you’ll know that the Turtles are no strangers to vehicles, whether they’re sewer-based, terrestrial, or even airborne!

Scale the cylindrical sewer tunnels by skateboard, hit the streets either by motorcycle or the Turtles Party Van (AKA “Shellraiser”), or make an even bigger impression with the Turtle Blimp! Upgrading your vehicles — and even your many ninja weapons — would also be an option.

We can’t talk about an open-world Teenage Mutant Ninja Turtles game without discussing the gameplay. Switching between all four Turtles, you’d explore the sewers, the skyline, and the New York City streets, keeping an eye out for both small-time thugs and major threats as you go.

And varied missions would range from moving in the shadows to all-out action scenarios. Using news reporter April O’Neil and street-smart vigilante Casey Jones as your guides, as well as Donatello’s hi-tech gear, you’d track down crime wherever the information takes you!

While being able to play each of the four Turtles would be awesome to say the least, there are many other characters in the TMNT universe who bring just as much to the table in each their own way. And among the most iconic are April O’Neil, Casey Jones, and Master Splinter.

Playing the Turtles would, for the most part, involve being very stealthy, especially as you navigate the busy streets. But as news reporter April, for example, you could access otherwise forbidden areas, such as buildings and public transport, where humans are in abundance.

Would you like to see an open-world Teenage Mutant Ninja Turtles game?