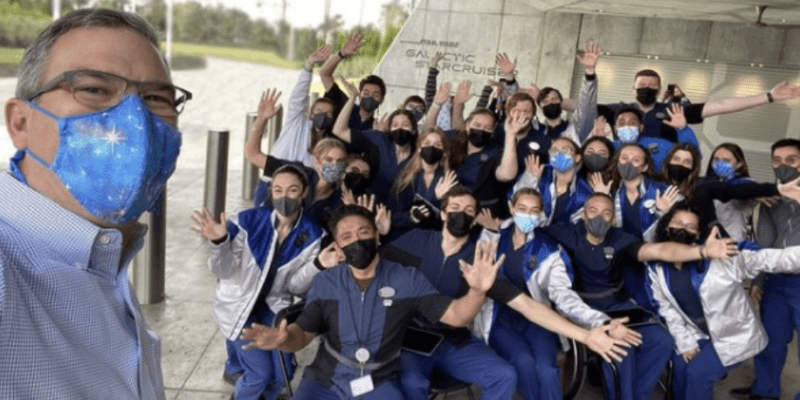 For months now, the Star Wars: Galactic Starcruiser has come under fire for myriad reasons, from the lackluster appearance of the “luxury” Corellian starliner’s staterooms to the $6,000+ cost for a two-night trip.

Now, with the first voyage on the Halcyon luxury starship “blasting off” on March 1, 2022, Disney has ramped up its marketing efforts for the Star Wars-themed hotel. But, unfortunately, the idea of the experience is falling flat with would-be Guests now that they’ve gotten a glimpse of what’s to come.

Many, in fact, have begun canceling their trips as opening day approaches.

Now, fans online have found yet another reason to be concerned — it seems as though the attire for the Cast Member crew who will be helming the Halcyon were taken directly from the Star Wars Launch Bay.

Had a great time visiting with the crew at Star Wars: Galactic Starcruiser. May the stars light their way as they prepare the Halcyon starcruiser for its inaugural voyage on March 1!

Garrison MacCraw reposted the photo, sharing his alarm at the Cast Members’ outfit choices amid all of the other drama surrounding the Starcruiser’s official debut at Disney’s flagship Orlando property:

Ooh my god the Starcruiser is just using Launch Bay costumes. This is just a mess.

Ooh my god the Starcruiser is just using Launch Bay costumes. This is just a mess. pic.twitter.com/6jy0Klq8Qr

In response, The Book of Soda Fett quipped:

They are because the Vitals for the Starcruiser don’t look good.

They are because the Vitals for the Starcruiser don't look good.

Is this the janitorial crew for the Starcruiser? Does not feel very immersive. (especially for the price)

Is this the janitorial crew for the Starcruiser? Does not feel very immersive. (especially for the price)

Related: All Oga’s Cantina Reservations For Early 2022 Are Cancelled

why are the galactic starcruiser uniforms making me mad

why are the galactic starcruiser uniforms making me mad

The uniforms for the Halcyon crew being recycled from the Launch Bay seems like another cost-cutting measure from Disney Parks. There have also recently been changes like smaller food portions and reportedly lower-quality merchandise than Guests are used to.

More on the Galactic Starcruiser

What do you think about the costume choices for Starcruiser CMs?