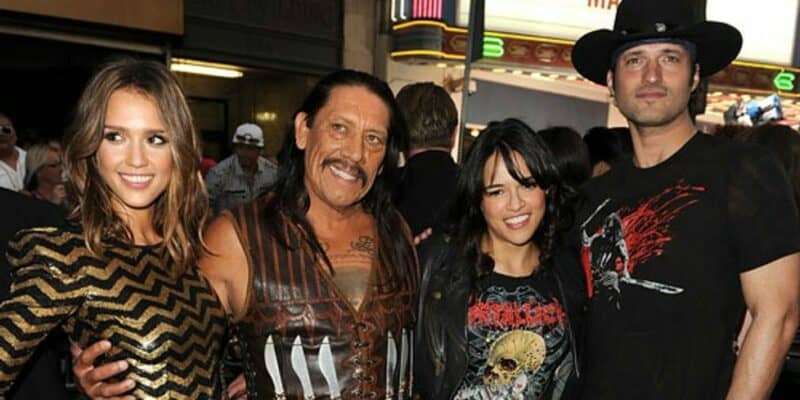 When movie fans think of famous actor and director combinations, Johnny Depp and Tim Burton probably immediately to mind. But, for many, Robert Rodriguez and Danny Trejo aren’t far behind.

While Trejo’s name doesn’t necessarily have the clout that Depp’s does in Hollywood A-List circles, the formerly troubled actor is rarely far behind when a new Rodriguez project is announced. Rodriguez and Trejo are actually second cousins and they’ve worked together on everything from Desperado (1995) to Dusk til Dawn (1997) to the Spy Kids franchise and its spinoff, Machete (2010).

Thus, when Rodriguez joined the ranks of directors for Season 2 of Jon Favreau and Dave Filoni’s The Mandalorian, it wasn’t long before Star Wars fans began clamoring for Trejo to make his debut in the Star Wars galaxy.

While The Mandalorian Season 2 was airing, one article noted:

…the actor should join Rodriguez in the Star Wars universe.

Trejo is a cross-genre favorite, an actor who knows what he does best and plays up to it. He can be anything from a heartwarming family man to a superhero to a heavy; his most famous role, Machete, somehow manages to embody all of those.

Our own coverage shared that Star Wars writer Gary Whitta (Rogue One: A Star Wars Story) has also gone to bat for Trejo, saying:

“I don’t have any clout at Lucasfilm, but let me tell you something, if I could wave a magic wand right now, Danny Trejo as a badass bounty hunter in the Star Wars universe. I think a lot of people would want to see that. I’m going to call Filoni after the show, we’re going to get him on.”

**SPOILERS FOR THE BOOK OF BOBA FETT SEASON 1, EPISODE 3 BELOW**

Now, Rodriguez is the showrunner for Favreau and Filoni’s latest project, The Book of Boba Fett, and (unsurprisingly), Trejo has finally made his first Star Wars appearance in Chapter 3, the episode Rodriguez himself directed.

Trejo’s role may very well be a recurring one — he portrays a Rancor handler who is set to teach Fett how to domesticate, and even ride, one of the famous Star Wars creatures. From a scene that leaked before the Mandalorian spinoff premiered, it appears that Fett’s goal to develop a relationship with his new Rancor is successful.

True to form, Trejo gives off the rugged-yet-gentle persona that he has become known for over the years. Furthermore, Trejo actually already has experience working with a Walt Disney Studios production. He was the voice actor behind Malice Maurauder/Wreck Maurader in Disney Channel’s Tangled: The Series in two episodes!

As for the final four episodes of The Book of Boba Fett, Rodriguez has promised that the series will “blow your mind” and “overdeliver,” so it seems there is still a great deal to look forward to over the next month.

Fans are, for example still expecting a number of cameos from Star Wars fan-favorites. “Baby Yoda” is reportedly set to appear, for example, and many fans are also hoping for cameos by Emilia Clarke’s Qi’ra and Crimson Dawn, Pascal’s Djarin, Timothy Olyphant’s Marshal Cobb Vanth, and, of course, Harrison Ford’s Han Solo — CGI, obviously — but Rodriguez, Favreau, and Filoni have remained characteristically tightlipped regarding special appearances.

The Book of Boba Fett stars Morrison in the title role and Ming-Na Wen as mercenary assassin Fennec Shand. It currently airs every Wednesday on the Disney+ streaming service.

Are you glad Danny Trejo has finally made his debut in the Star Wars franchise?