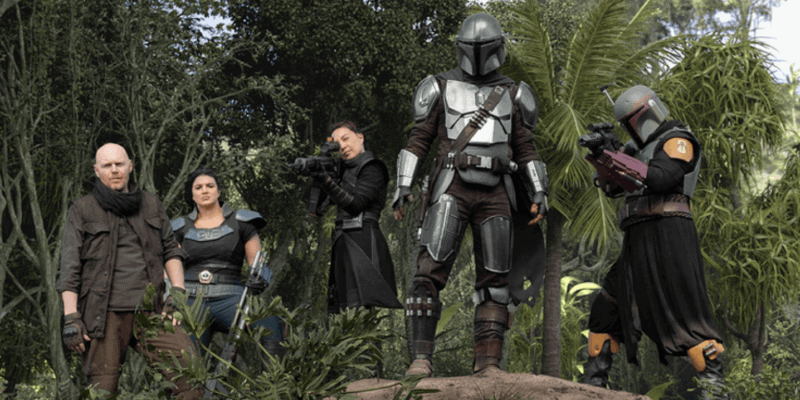 After that, though, there was yet another shock — an unexpected post credits scene featuring Shand and original trilogy icon Boba Fett (Temuera Morrison).

The scene took long-time Star Wars fans back to a very familiar Tatooine location, Jabba the Hutt’s palace. Hutt, of course, was killed by Princess Leia (Carrie Fisher) in Star Wars: Episode VI – Return of the Jedi (1983), but his former right-hand man, Twi’lek Bib Fortuna (Michael Carter), has taken his throne in the intervening five years between ROTJ and The Mandalorian.

Shand makes quick work of Fortuna’s henchmen — and frees a slave who is shackled to the floor (a familiar sight to original trilogy fans) — but leaves Bib himself for Fett to take care of. Once the Twi’lek was unceremoniously killed, Jango Fett’s son took Jabba’s throne, signaling that he’s about to take the desert planet — and who knows where else in the galaxy — for himself on a quest for vengeance.

Then, the words “The Book of Boba Fett – Coming December 2021″ flashed on the screen.

Relateed: No More Grogu? The Mandalorian Might Get an Exciting New Best Friend

This upcoming spinoff — which will be helmed by “Chapter 14: The Tragedy” director Robert Rodriguez — is an exciting project for fans of the iconic bounty hunter, but it does lead to a bit of a problem for The Mandalorian saga moving forward.

As one article noted, “Now that Din Djarin has dedicated his life to protecting Grogu, and Boba Fett has his own spinoff, there isn’t much bounty hunting in a show centered around a bounty hunter.”

The same article pointed out that there’s a clear solution to this problem in Favreau and Filoni’s “Mando-verse” — the introduction of Star Wars Legends character, Boba’s fellow bounty hunter Jodo Kast.

Kast is a foil to Fett, clad in nearly identical Mandalorian armor — except with yellow strips instead of red — and possessing the same competitive, no-nonsense attitude.

Kast eventually began using Boba’s name as his own, believing that he would find more success in the galaxy if he could pose as the notorious Kaminoan. This did not, as one might expect, go well:

To get revenge, Boba set up a trap where he hired Jodo on a mission that led him straight to the barrel of Boba’s blaster. Unfortunately, that’s what led to Jodo’s demise. But with Star Wars canon rewriting these Legends, The Mandalorian can revive Jodo to serve a vital storytelling purpose.

Introducing Kast would not only fix the problem of The Mandalorian having a distinct lack of actual bounty hunting, but he could fill the intriguing role of “imposter Mandalorian” now that Marshal Cobb Vanth (Timothy Olyphant) has surrendered Boba’s beskar to its rightful owner.

While Lucasfilm has not yet confirmed anything about Jodo Kast being cast in The Book of Boba Fett, Ahsoka, or The Mandalorian Season 3, he would certainly be a fascinating addition to an already colorful group of characters.

Would you like to see Jodo Kast join the live-action Star Wars galaxy?