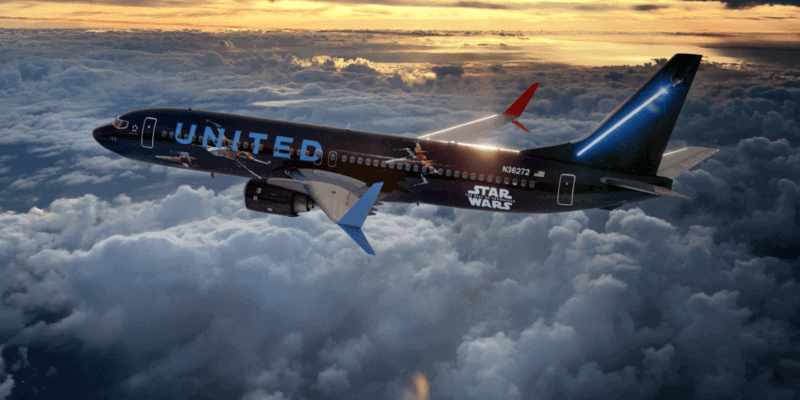 Before Star Wars: Episode IX – The Rise of Skywalker (2019) — the final movie in the Skywalker Saga — hit theaters in December 2019, Disney’s marketing blitz was intense.

Later, of course, the prequel trilogy (1999-2005) told the tale of how younger versions of Anakin Skywalker/Darth Vader (Hayden Christensen) — who was in love with Padme Amidala (Natalie Portman) — and Obi-Wan Kenobi (Ewan McGregor) found themselves on the fiery planet Mustafar, having a lightsaber battle for the ages.

One of Disney’s biggest (literally) marketing efforts for the Skywalker Saga finale was a commercial jet in the United Airlines fleet.

Today, August 3, 2021, some lucky travelers going from Norfolk, Virginia to Denver, Colorado got to unexpectedly ride on the Star Wars plane!

It may not be the Millennium Falcon but United’s 737-800 The Rise of Skywalker Star Wars livery is a close second. To each passenger aboard today’s nonstop flight to Denver International Airport…may the Force be with you…always. #starwarsfan #LetsFly

It may not be the Millennium Falcon but United's 737-800 The Rise of Skywalker Star Wars livery is a close second. To…

“United Airlines and the Star Wars franchise share a common goal: connect people and unite the world,” said Mark Krolick, United’s vice president of marketing. “We are thrilled to join forces and help promote the concluding chapter of the Skywalker story, while at the same time enlisting help from our new friends from the Star Wars universe to demonstrate the importance of safety for our customers and colleagues.”

…The new paint design, which the airline teased last spring on its social media channels, captures the exotic atmosphere of the Star Wars galaxy and features imagery of famous Star Wars spacecraft, including the X-wing and TIE fighter starships. The aircraft’s tail starkly displays a different colored lightsaber – the weapon of the Jedi – against a black backdrop on each side, reflecting the two sides of the Force.

Have you ever ridden the United Star Wars jet?