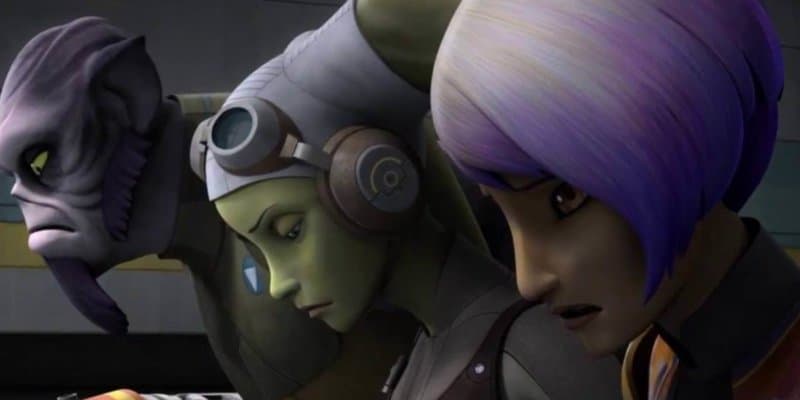 The Hollywood Reporter has shared that another Star Wars Rebels Ghost crew character will be making their live-action debut in an upcoming Star Wars series.

Seemingly, Sabine Wren will be appearing in the upcoming series, Ahsoka, which many believe will function as a Rebels sequel. THR quietly slipped the news into their article, noting:

…Ahsoka Tano, the fan-favorite Jedi, appeared in animation in 2008 before Rosario Dawson made the jump to live action in The Mandalorian season two. Now, Dawson is leading a live-action Ahsoka spinoff for Disney+, with sources saying Lucasfilm is looking for an actress to star opposite Dawson as Mandalorian warrior Sabine Wren.

Thrawn is expected to make his first live-action appearance in The Mandalorian Season 3 or one of its spinoff series. Furthermore, Ahsoka’s fellow Jedi Ezra Bridger is also expected to appear and is rumored to be played in live-action by Aladdin star Mena Massoud.

What is, however, somewhat surprising, is that Lucasfilm doesn’t seem to be considering Rebels voice actress Tiya Sircar to portray Sabine in live-action.

Although Ashley Eckstein — who voiced Ahsoka in all seven seasons of Star Wars: The Clone Wars and in her Rebels arc — was replaced by Rosario Dawson for the character’s live-action role, Bo-Katan Kryze actress Katee Sackhoff is playing her Star Wars character both in animation and in live-action, so there are precedents on both sides.

We do not, of course, know if Sircar turned down the live-action role in the Star Wars franchise for some reason.

At this time, neither Lucasfilm nor Disney have confirmed Sabine Wren casting details.

Related: ‘The Clone Wars’ – Everything to Know About Captain Rex

However, we do have an idea of how the popular character may play into The Mandalorian universe moving forward.

Sabine, at one point, wielded the Darksaber after finding the ancient Mandalorian weapon in Darth Maul’s things. Eventually, Sabine gave the black-bladed lightsaber to Bo-Katan, who ultimately lost it herself.

In the Season 2 Mandalorian finale episode (“Chapter 16: The Rescue”), Bo-Katan once again joins forces with bounty hunter Din Djarin (Pedro Pascal) — Mando himself — in a bid to rescue Grogu (his reason) and re-secure the Darksaber (her reason) on Moff Gideon’s (Giancarlo Esposito) Imperial cruiser.

In an ironic twist of fate, Djarin himself ends up winning the saber in combat, leaving Bo-Katan once again without the item she needs to rule Mandalore. It is quite likely that Sabine’s live-action storyline in the Ahsoka series and beyond will somehow involve the Darksaber.

For those unfamiliar with the character’s role in the Star Wars universe, the official Star Wars Databank describes Sabine Wren as:

Sabine Wren was a Mandalorian warrior, explosives expert, and graffiti artist — qualities that came in handy as one of the first rebels against the Empire. Part of the Ghost crew, Sabine used her gift for bomb-making to great effect against the Empire, and would often mark her work with spray-paint tags. Her classic Mandalorian armor was notable for incorporating her own custom stylings, reflecting her creative-meets-rebellious spirit.

It is not yet known if other Ghost ship crew members will be appearing in Ahsoka, but it seems likely given the nearly overlapping timeline of The Mandalorian saga and the end of animated series Rebels.

Are you looking forward to seeing more live-action members of the Ghost ship crew?