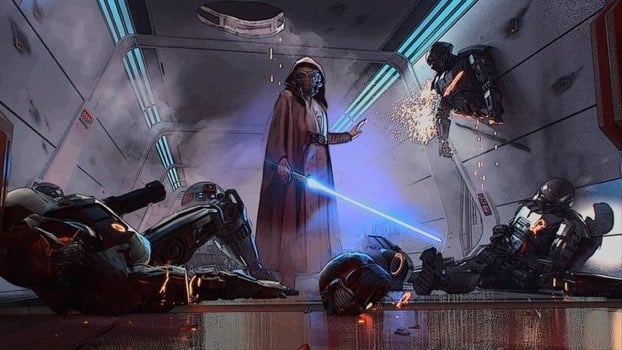 Now, it has been reported just how far the episode’s director, Peyton Reed — who shared a touching social media exchange with Hamill after the finale aired — and his Mandalorian crew went to keep fans from finding out about Skywalker’s reappearance in the Star Wars franchise.

Director @MrPeytonReed went so far as to commission this fake concept art, of the character Plo Koon, to hide @HamillHimself’s involvement in #TheMandalorian Season 2 finale.

Director @MrPeytonReed went so far as to commission this fake concept art, of the character Plo Koon, to hide @HamillHimself's involvement in #TheMandalorian Season 2 finale. pic.twitter.com/CRF8vPHPeg

Before the second season concluded, many Mandalorian viewers speculated that Plo Koon would show up — this would have connected specifically to the Dave Filoni-directed Season 2, Episode 5 (“Chapter 13: The Jedi”), in which Star Wars: The Clone Wars fan-favorite Ahsoka Tano (Rosario Dawson) made her live-action debut.

Although this concept art was just an elaborate ruse to prevent fans from knowing who was really about to save the day in the Star Wars story, it is certainly possible we could see Plo Koon again, perhaps even in a flashback sequence in the upcoming Mandalorian spinoff series, Ahsoka.

As for Luke Skywalker, his reappearance in The Mandalorian is almost inevitable now that he is Grogu’s Jedi Master.

Whether his next appearance comes in The Mandalorian Season 3, Ahsoka, or The Book of Boba Fett — or even the rumored Luke Skywalker series that could reportedly star Sebastian Stan — we’re clearly not done with the most iconic Jedi in a galaxy far, far away.

What do you think about Peyton Reed’s commitment to keeping the Luke Skywalker cameo a secret?