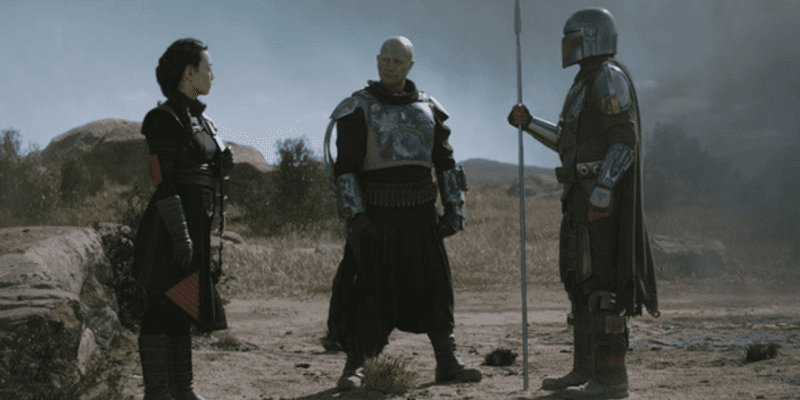 The Mandalorian Season 2 took viewers on a wild ride. From returning to Tatooine and meeting the Krayt dragon and Mos Pelgo Marshal Cobb Vanth (Timothy Olyphant) — and with him, Boba Fett’s armor — in “Chapter 9: The Marshal” to the reemergence of Jedi Knight Luke Skywalker (CGI Mark Hamill) in the season finale episode, “Chapter 16: The Rescue”, there was never a dull moment

Some would argue Maldo Kreis was dull, but I digress — plus, krykna are never boring.

Then, two short phrases flashed across the screen — “The Book of Boba Fett – Coming December 2021″.

Jabba, of course, died at the hands of Princess Leia (Carrie Fisher) in Star Wars: Episode VI – Return of the Jedi (1983).

In other words, it was a lot to take in.

To date, we’ve received little in the way of details regarding the upcoming Mandalorian spinoff series, but we do know it wrapped filming recently. Now, it seems that IMDb has confirmed something else about the show — it’s going to be a lot longer than earlier rumors indicated.

Instead of a four-episode miniseries, it seems that The Book of Boba Fett will have at least seven episodes — this is the number of installments IMDb states Morrison will be part of and he will, presumably, be in every episode.

While it’s possible that the first season of the show could have even more episodes — both seasons of The Mandalorian have had eight — seven episodes is still significantly more time for storytelling than fans were initially expecting for this series.

If, in fact, the show ends up following Fett as he seeks revenge against those who have wronged him — a likely premise — we could see a different cameo appearance in each episode. Legendary Star Wars characters like Han Solo, Bossk, and even Mace Windu could potentially show up in the new Boba Fett series.

It is important to note that IMDb does not always reflect the most up-to-date production status of any movie or series, so it is possible that changes will be made before The Book of Boba Fett airs this holiday season.

Previously, Favreau shared these details about the upcoming “next chapter” of The Mandalorian saga:

“At the end of the show, Boba Fett came out and it said ‘The Book of Boba Fett Coming December 2021,’ and that wasn’t part of the big Disney announcement [Walt Disney Company Investor Day on December 10], but here’s the logo. We wanted to hold this back because we didn’t want to spoil the surprise of all the shows when Kathleen Kennedy was up there and so they let me keep this one a secret.

So this is actually separate from The Mandalorian Season three. but what we didn’t say in that announcement is that the next show coming up, Kathy said the ‘next chapter’ and that’s going to be the Book of Boba Fett and then we go into production right after that on Season three of The Mandalorian back with the main character that we know and love.”

One thing’s for certain — we love Morrison’s version of Jango Fett’s son, and we can’t wait to see what happens next.

Are you getting excited about The Book of Boba Fett? How do you hope the iconic beskar-clad bounty hunter’s story continues?